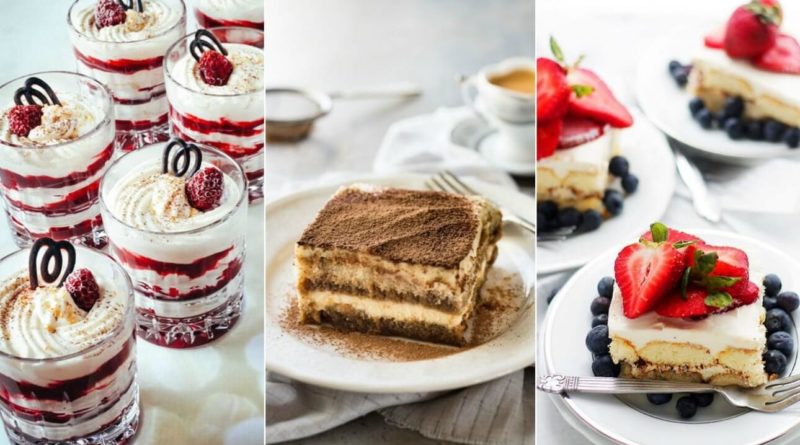 We unanimously gave the palm of superiority among the desserts to Tiramis – a dessert that originated either in Siena or Florence, but exactly in the 17th century. Not once or twice all the editorial staff who have been to Italy have tried this divine dessert. Not in vain in translation from Italian “tiramisu” means “raise me”. Tiramisu is perhaps not only the most delicious dessert, but also the most famous dessert in the world in principle.

Of course, we are also very fond of other Italian desserts (panna-cotta, buckwheat pie, semifredo and the most delicious ice cream in the world), but Tiramisu is beyond competition.

Blanche, parfait, soufflé, meringue, claphuthie, profiteroles, crocembouche, eclairs, pasta, madeline… How much the French love it, and we follow them to sweeten our receptors! Discussing French desserts, we still agreed on a cream-brûlée, especially since it is really possible to cook it at home: the Internet is full of step-by-step recipes for crème-brûlée, and the necessary products are sold in any store (the main thing is that the milk and eggs were of good quality).

While in Slovenia, be sure to try the Kremna Rezina (or Kremshnita) cake! This is a real national treasure of Slovenia. We have tried Gibanica (a multilayer cake filled with apples, poppy, vanilla, cottage cheese, nuts and raisins) and strukles in this wonderful little country, but it was Kremna Rezina that conquered our hearts! There are recipes on the Internet, all products are available, no exotic.

We argued for a long time about the place of this traditional Austrian dish in our rating: those who did not eat Kremna Rezina, fought for the third place for the Vienna Strudel. Let’s consider that they are approximately equal in taste.

By the way, the famous Sacher cake, Mozart candy and the Salzburg knockout shop did not cause such discussions. Tasty? Yes! But for the amateur.

Layered dough basket with cream custard – national pride and dessert number 1 in Portugal. And we agree with the Portuguese brothers completely! The dessert, which will soon turn 200 years old, comes from the Jeronimos Monastery. In 2011, Pashtel de Belémigne (baskets from the old confectionery shop in Lisbon with this name are considered to be the benchmark) was named one of the seven gastronomic wonders of Portugal. Can I cook it at home? Prescriptions for mass – why not try it?

Remembering the Spanish desserts, our opinions were divided. On the one hand, we like Crema catalana, a gentle cream with vanilla notes and delicious sugar crust, but it resembles French cream-brûlée. That’s why we choose Churros, which is made of sweet custard dough, deep-fried or baked in an oven in the form of a horseshoe, hinge or long sticks.

Another Spanish delicacy Turron – a sweet mass of a mixture of honey (or sugar) and almonds (or other nuts) – we will refer to the category of “amateur”: very hard. In addition, Turron can not be cooked at home, and churros can be.

Black Forest Cake, or the Black Forest, is the king of German desserts. Without at least a minimum of cooking preparation you can’t get close to it. And the cherry is needed, which is not always at hand. Among the German desserts, we also remembered Christmas cake Stollen, Bavarian cream and red sour-sweet kissel with vanilla sauce

English pudding, of course, is famous, but he failed to get into our strict rating. Not that level to compete with Tiramisu and crème brûléeuilée ” As well as buns called “buns”. Buns and rolls. We didn’t vote for Banoffi dessert either – it’s a delicious cake, but it’s very difficult to cook it correctly. Jamie Oliver, of course, can do it, but even in the English cafes “Banoffi” are too different. Another thing is a trifle – a dessert in a glass, which can be prepared by any hostess. It is a multi-layered delicacy in which biscuits, cream, berries, confitures and any other stuffing alternate.

The Hungarians are noble sweet toothpastes! During our trip to Hungary we were amazed by the number of coffee shops and pastry shops. Rolling Retesh (approximately so it sounds in Russian) is a very popular national dessert, which can be found in every restaurant and cafe. It is baked from the most delicate dough, filled with sweet cheese filling and added poppy, ground nuts, cherry, raisins. Somehow similar to the Viennese strudel.

The Hungarian kurtoskalach and his closest relative, the Treadelnik from the Czech Republic, we have not included in the rating, as it is almost impossible to cook them at home: we need special stoves.

Yeah, someone’s surprised to find Finland in the sweet ranking. Yes, not only licorice is eaten here. In Finland you can eat berry pies (with blueberries, cowberries, cloudberries and other northern berries), Vyborg pretzels, Aunt Hana’s cookies and “May 1” cookies resembling a bird’s nest of vanilla twigs, Finnish cake with lemon and many other desserts.

We will celebrate the Runeberg cake – a traditional Finnish dessert “with history”. Actually, this story says that the cake was invented by the wife of the famous Finnish poet of the XIX century Johann Ludwig Runeberg, who composed the anthem of Finland. It’s easy to make a cake – try it!

Switzerland, Montenegro, Greece, Croatia, Bulgaria and other countries we love! No offense, but your desserts are either too sweet or too similar.