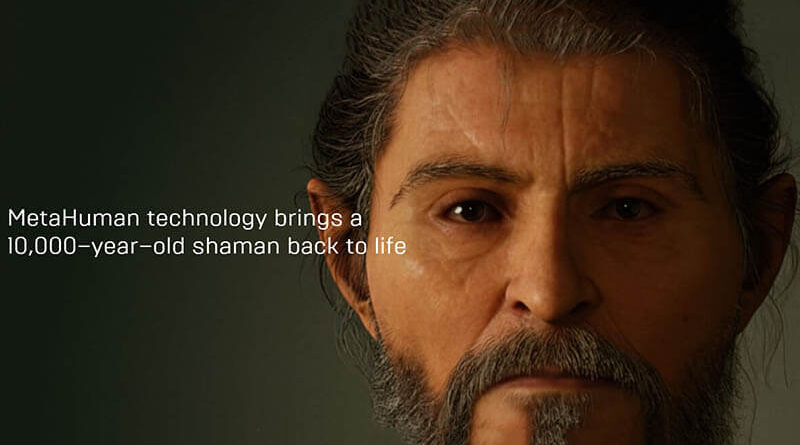 In 2021, Epic introduced a new tool for creating realistic characters for games, called MetaHuman. However, the modern editor has found application in archaeologists.

In addition to Sofia Stefanovic, a professor of physical anthropology at the University of Belgrade, and her colleagues, research project 3Lateral, part of Epic Games, worked on the project. The tool allowed them to recreate not only the appearance of a long-dead man, but also facial expressions.

A human skeleton was found in eastern Serbia, on the banks of the Danube River.

Because of his unusual lotus-shaped pose with crossed legs, archaeologists called the man a “shaman.”

Having studied the skeleton, anthropologists have determined the height and weight of man. In addition, they learned that the man ate mostly seafood.

First, anthropologists created a clay bust of a man. To do this, scientists have reconstructed the face, restoring features based on physiological data. Layers of material were superimposed on the three-dimensional copy of the skull, reproducing the head in its real size.

The model was then scanned to create a digital version in MetaHuman.

With the help of digital tools, experts have recreated the more realistic skin, hair, teeth and wrinkles of the “shaman” based on the analysis of his DNA.

The model was then animated in MetaHuman using pre-set presets. In this way, the face was able to move and show different emotions.

The process of creating a virtual human model was shown in a separate video: video

Epic Games also implemented the ability to interact with a digital character using a smartphone, which was demonstrated at one of the exhibitions.

The company is developing MetaHuman and recently introduced a major update that added new looping facial animations and the ability to convert static models to animated ones. In addition, there are new settings for clothes, hairstyles, mustaches, eyebrows, eyelashes and other items. Epic Games has also expanded the list of lighting settings. The first version for testing was opened in April 2021. It was highly praised by the developers, as previously such graphics required extremely time-consuming and expensive internal methods or outsourcing, and now takes “a few minutes”.