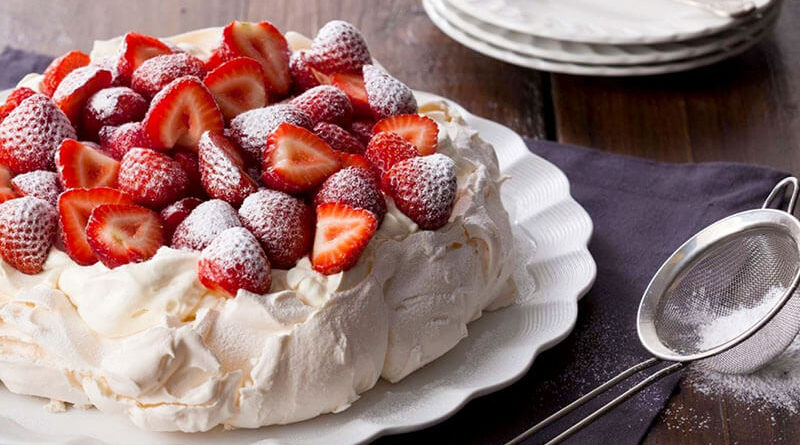 Six legendary cakes that the whole world knows (and bakes). Famous desserts from Austria, Italy, Germany and, of course, Russia. It will be delicious!

Real gourmets-sweetums sincerely consider the king of any dessert table. Which is quite understandable by their taste preferences. Staying absolutely indifferent to meat delicacies, vegetable dishes and valuable kinds of fish, they show children’s delight when sweet is served on the table. It is hard to argue that a cake is a worthy end to an anniversary party or gala feast. But few of us know that the most famous cakes, which today can be tasted in any cafe or restaurant, have an amazing story.

Cake “Anna Pavlova” is one of the most popular cakes in Russia today.

Light and airy creation of “Pavlova”, based on meringue and whipped cream with the addition of berries and fruits, owes its appearance to the tour of the famous Russian ballerina Anna Pavlova in New Zealand. Local confectioners invented this delicate dessert to show the talented woman their admiration. And it was so sincere that the cake has long been among the ten most delicious desserts in the world.

By the way, experienced confectioners say that it is very easy to make, it is enough to know a few secrets.

Today you can try Tiramisu anywhere in the world, but only in Italy it is unique. You don’t believe it? Try it as soon as you have the chance!

The most famous Italian sweet dish can be rightly considered “Tiramisu”. Its name literally translates as “lift me up”. What do you mean by that? Practical dieticians believe it’s a high calorie treat. Vivacious Italians tend to think that every bite they eat significantly improves their mood. But cunning nobles tried to taste it in front of love pleasures to confirm their masculine strength to the chosen one.

This dessert has the status of an aristocrat among his brethren, so it requires an appropriate attitude. Its soft, delicate taste with light creamy notes should be enjoyed slowly. It’s very difficult to explain what a real Tiramisu is. It is something between pudding, cake and soufflé, and in the best manifestations of these dishes.

How to make a panthetone at home →

Desserts of Sicily – try the most delicious →

A very simple at first glance cake – a dozen cakes with cream – has won the hearts of many sweet women!

Napoleon” cake in the minds of each of us is inextricably linked with France, although it was first cooked in Russia in 1912 to celebrate the centenary of the expulsion of the French from the country. The dish made of thin puffed cakes and custard was served on the table in the form of a triangular hat of the defeated emperor and suddenly became unheard of popularity! And even today, only a few people can refuse the pleasure of enjoying a piece of soaked nourishing “Napoleon”.

Let’s say frankly, not everyone falls in love with Zaher and not the first time. It’s too prim and specific – nothing extra, no raisins.

If fate ever brings you to Vienna, be sure to try the luxurious Austrian cake “Zaher”. A dizzying cocktail of tastes and aromas usually leaves no connoisseur of fine dishes indifferent – these are elegant chocolate notes with light tones of apricot jam. It first appeared on the table of Austrian Chancellor Metternich in 1832. A young sixteen-year-old chef Franz Sacher created an amazing creation of chocolate cakes with layers of apricot jam, filled with thick chocolate glaze. The experiment was more than successful in the end!

Schwarzwald Cake – No. 1 in Germany and Austria

The Germans are not one step behind the Austrians in the culinary industry. Contrary to stereotypes, they are famous sweet tooth! Who’s ever been to Germany knows that their desserts are hard to refuse. The “Black Forest” cake, known as the “Black Forest”, is a weighty proof of that. Its performance is as simple as a day: the biscuits alternate with whipped cream and are decorated with fresh cherries. The secret of tenderness is the impregnation of chocolate cakes with fruit brandy made of cherry. The Germans affectionately call it “Kirschwasser”. The top of the cake is sprinkled with chocolate chips.

Bright scarlet cake with strips of cream cream was invented by Americans. During the Great Depression, when groceries were given on cards and cakes were all gray and brown, confectioners invented to add to the dough … beetroot mass. The cakes were bright, purple and life-affirming! The red velvet is capricious. Cream and soft cheese cooled, butter and eggs, on the contrary, warm, again send the shortcakes to the fridge – a lot of fuss.

But the result eclipses all efforts. Try, if you don’t believe, it’s not for nothing that “velvet” is among the ten most famous cakes in the world.

You can endlessly talk about the diversity of tastes and identities of desserts from different countries, but it’s better just to try them. Those who have the opportunity to travel, it is enough to make an order at a restaurant with national cuisine. The rest can try on the apron of a novice pastry chef and surprise their families!