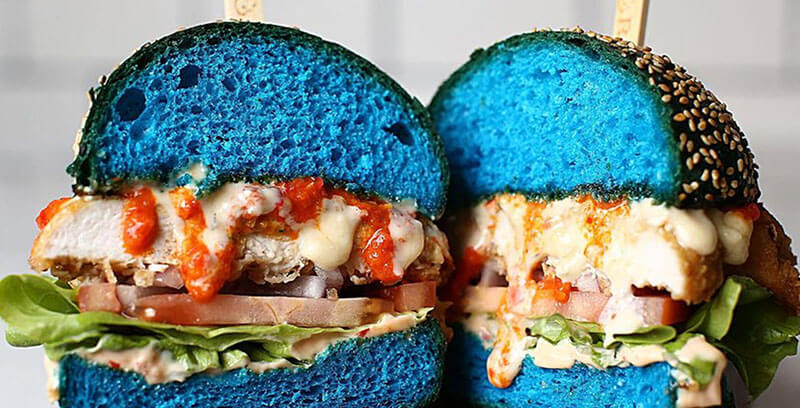 The hamburger is considered a tacit American symbol, like jeans or Coca-Cola. American sandwich of different price and fillability is available to any resident of this country, there are legends about it, almost every restaurant includes a burger in its menu.

Originally, this type of sandwich meant meat between two pieces of roasted bread, but today there are a lot of options for burgers with both fish and cheese, and with other ingredients, sometimes incredibly expensive.

The stories of the hamburger

As far back as 8 centuries ago, Mongolian soldiers were carrying the meat of horses and camels under the saddle, where it was fought off during a race and prepared under the influence of the temperature of the horses’ bodies. The result was dried meat, which the soldiers ate with koumiss. Later this idea will form the basis of a Tatar steak, but first the recipe came to Hamburg with Russian merchants, where the Hamburg steak was invented – minced meat formed in a cutlet and roasted in breadcrumbs.

The steak recipe spread to the nearest countries and to this day historians argue who was the first to come up with the idea to put the cutlet between pieces of bread and present it as a separate dish.

It is believed that the name of the hamburger came from the German city of Hamburg, because it was German immigrants who brought the recipe for fried pork in bread to America. Another version says that this city is the state of New York, where in 1885 the enterprising Menchis brothers fed visitors to a beef cutlet fair in a bun. In parallel, in the same year in Seymour, Nagrin’s chef was selling Charlie’s Hamburger, which consisted of meatballs embedded in the bread.

Cook Fletcher Davis of Texas invented his hamburger in 1880 – it was a cutlet with mustard and onions, put between two slices of bread.

But the Bilby family from Tulsa believes that the authorship of the hamburger belongs to their ancestor – he made cutlets in 1891 and stuffed them with yeast buns. This year was “fertile” for another author of the cutlet sandwich – Otto Kuasawa cooked beef cutlets and served them in a bun with fried egg. Over time, the egg was removed.

Approximately 30 years later, Walter Anderson from Kansas made the hamburger the main dish of his chain of snack bars – that’s when the hamburger became a very recognizable and frequently ordered dish.

Another chain of cafes Wimpy Grills made hamburger the most affordable meal – it was affordable for all segments of the population and cooked it no longer than one minute.

The McDonald’s fast food chain also influenced the popularity of hamburgers by improving the recipe, serving, speed and price. And the ability to buy food without leaving the car has made it popular with motorists.

Interesting facts about the hamburger

Hamburgers are scolded because of their high calorie content and ingredients, which include GMOs, chemical additives, preservatives that are harmful to health. Repeatedly, hamburgers forgotten for several years somewhere in the garage or utility room, have not changed their appearance or taste. So David Whipple from Utah found a hamburger in his jacket pocket, bought 14 years ago, which only slightly hardened but did not spoil.

Harry Sparle from Florida is the most famous hamburger collector of all time. If a thing – from a pin to a carpet – is made in the form of a hamburger, Harry immediately adds an unusual piece to his collection. His car is also shaped like a hamburger.

The world’s largest hamburger was made in Japan – it weighed 136 kg, had a diameter of 92 cm and a height of 44 cm. The hamburger was cooked for a whole week. In 2012, the record was broken in Canada – the weight of the new heavy hamburger was 268 kg.

In 2012, Harvard students launched the burger into space, treating it with a special spray and fixing a camera and GPS sensor on it. The hamburger flew into space in a helium ball, but after 30 kilometers the ball burst.

The most expensive hamburger costs $5,000. It’s for sale in Las Vegas, the Fleur restaurant at the Four Seasons Hotel. The burger is served with truffle sauce, truffles, and a truffle bun brioche in company with an expensive vintage wine.