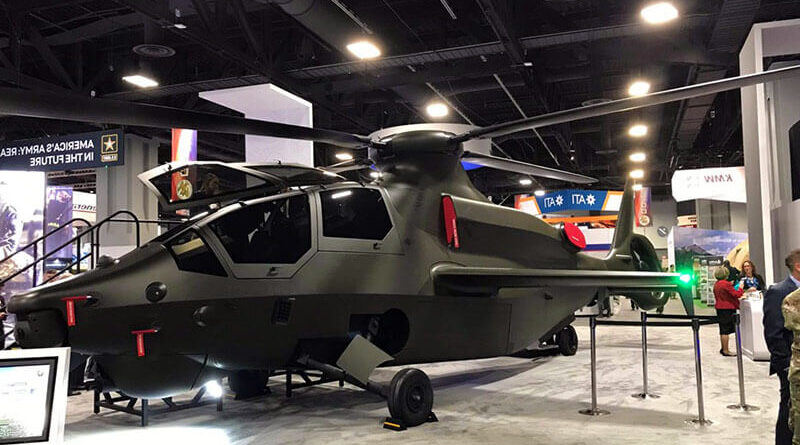 The week was rich in events in the aircraft industry, which is mainly due to the AUSA (Association of the United States Army) 2019 Symposium, which started in Washington on October 14. Robotics, guided armored vehicles, guns and a demonstration of the capabilities of modern artillery – all this can be seen by visitors to AUSA.

Demonstration of concepts and prototypes of promising high-speed helicopters for the U.S. Army aroused the greatest interest of aviation enthusiasts. For example, Sikorsky showed the project of a super high-speed reconnaissance helicopter, made on the basis of S-97. The Raider-X (the name of the new helicopter) will be about 30% larger than its predecessor, although it will retain the main technical solutions of earlier modifications, in particular coaxial rotor and one push rotor.

And in the company Bell Helicopter decided to make a big surprise, showing the world a full-size model of the helicopter Bell 360 Invictus: before we could see the machine only in the images. Now we can better look at the scout concept and draw more specific conclusions.

According to the information provided earlier, the Bell 360 Invictus is based on technical solutions that were previously implemented on the Bell 525 Relentless – a medium-range multipurpose helicopter. The new car can fly at a cruising speed of 333 kilometers per hour.

The helicopter looks very similar to Boeing /Sikorsky RAH-66 Comanche, the program of which was closed earlier. The old car was built around the principle of discreetness. It is difficult to say how much the new helicopter meets these requirements: the developers themselves do not emphasize “invisibility”, pointing to other qualities of their brainchild, in particular – speed.

As the Bell 360 Invictus, and the aforementioned Raider-X is created for the competition FARA (Future Attack Reconnaissance Aircraft). The U.S. military wants a worthy successor to the retired Bell OH-58 Kiowa light multipurpose helicopter. Now its functions are partially performed by the AH-64 Apache attack helicopter.