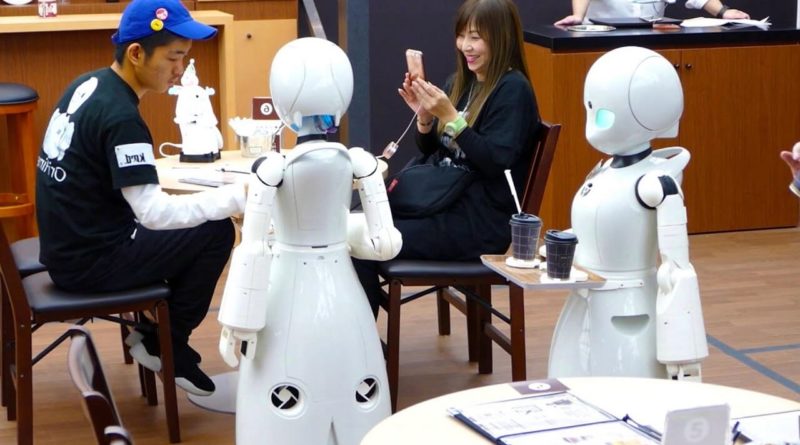 The avatar cafe Dawn ver.β, where guests are served by robot waiters controlled by paralyzed people, has been put into operation in test mode in Tokyo.

OriHime-D robots are used as waiters (only 120 cm tall), which were developed by the startup Ory specifically for people with disabilities.

To get to the cafe located in the foyer of the “Japanese Fund” building, you need to buy a separate ticket, and only then take a table and order drinks from the robots. Each of them serves two tables, taking orders and bringing orange juice or coffee.

“Ori-Hime” politely welcomes the guests of the cafe, introduces and starts a conversation, even jokes. The robot holds a tray and a plaque to which to attach his order, tick the appropriate box in a special plaque. In a few minutes the robot brings drinks.

A robot cafe opens in Tokyo with robot waiters

It is difficult to surprise someone with a robot-waiter, unless such a robot is a really outstanding and high-performance system, and not a cheap plastic handicraft, designed to attract the attention of visitors to the cafe-one day. In other words, it is unlikely that we will see really high-quality autonomous robot waiters in the next couple of years – rather we will talk about a kind of “virtual conveyors”, providing a budget delivery of food inside a large restaurant of public catering.

Tokyo has come up with a new and very original solution – a cafe equipped with robot waiters managed by remote employees directly from households! 120-cm robots OriHime-D (in Japanese mythology, the goddess of the star Vega wears the name OriHime-D) trust operators with serious diseases that significantly limit motor skills and mobility. The devices not only allow such people to find a job, but also contribute to their socialization and self-actualization.

Ten operators will take over the shift management of five robots – they will receive a thousand yen per hour (about $8.80)

At first glance, the news may not seem so significant – after all, it’s just one cafe and five robotic avatars. But this news illustrates that the world is gradually “growing” with a growing number of connections between different objects, opening up other forms of interaction between people and bringing society closer together. Where outdated forms of politics and economics still seek to create discord and flood society with waves of groundless hatred, robots, all sorts of applications and telepresence technologies are preparing to unite like-minded people, to break up stale centralized systems, and to give people a host of opportunities that simply did not exist before.

We can assume that similar avatars will soon appear in many other industries. And also they can be gamified! In this case, in the world may appear a kind of version of Uber, which allows registered operators to take over the control of idle avatars and perform certain tasks, receiving for this money, tokens and borrowed from computer games Achievements-Achivka – so, for zest.