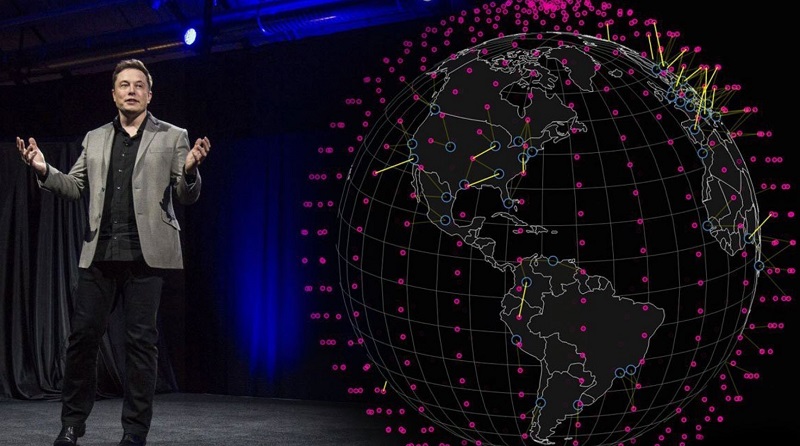 In mid-November, the Earth received 60 new artificial satellites at one point. The newcomers make a drop in the sea in comparison with thousands of already functioning probes, but it is only the beginning – if all goes according to plan, they will become more than forty thousand in the next ten years.

Private space company SpaceX, which launched them on November 11, wants to create an unprecedented satellite constellation Starlink, which aims – to give the opportunity to sit on the Internet from anywhere in the world at a good speed for acceptable money. On the one hand, this is a great idea, because there are enough areas on our planet to bring the Internet to which it is otherwise economically unprofitable.

But on the other hand, astronomers fear that such mega stars of satellites will literally separate us from the rest of the universe, filling the sky with inevitable stripes of light.

Previously, this was not a problem: a decade ago, the launch of a single satellite into orbit was prohibitively expensive. But the reusable Falcon 9s have significantly reduced the cost of sending cargo into space, and the satellites themselves have become miniature enough to send them literally stacks, so that now one company like SpaceX, may well fill the nearest space with thousands of spacecraft.

SpaceX launched a “stack” of satellites, each weighing 225 kilograms, from Cape Canaveral in the morning of November 11, bringing them to a height of 280 kilometers above the Earth. They will continue to fly in their higher orbits and open their solar panels over the next few weeks. After that, they will join the previous batch of satellites launched in May, and the total number of satellites will be 115.

After the test launch of Starlink in May, rows of satellites shining with reflected light from the sun, attracted the attention of many amateur astronomers, and the video flight of all 60 spacecraft over the Netherlands became almost viral. But the astronomical community, which has spent decades developing and building sensitive optical equipment that is tuned to find the weakest glimpses of light from all over our galaxy and beyond, sees in the same video funeral of distant space observations from the Earth.

Until recently, there were only a couple hundred such low and bright satellites, according to the International Astronomical Union (IAU), and their orbits were largely outside the large terrestrial telescopes, so they were not a problem for space observation. But Starlink will cover the entire Earth, and there will be several tens of thousands of satellites in it – it will clearly create complications in observing the sky.

Such traces are left by Starlink satellites on the photos taken by Lowell Observatory in Arizona.

Aiming to finance its ambitious flight to Mars, SpaceX hopes to start selling devices to access its satellite Internet around 2020. CEO Ilon Mask has already written a message in Twitter through the test network Starlink, and the company plans to quickly build up the pace. After its launch in November, SpaceX plans to replenish its constellation of satellites approximately every two weeks, and to increase the number of satellites to a thousand over the next year.

Moreover, the planned size of the mega-star will increase from 12,000 satellites to more than 40,000, according to the documents that the company provided to the International Communications Union last month. This is twenty times the total number of satellites in orbit. And that is a great deal for a near-Earth space that already has enough space debris.

Astronomers are trying to figure out how the influx of nightlights will affect their work. Earlier simulations showed that the original version of Starlink with 12,000 satellites will make the future Big Synoptic Survey Telescope – a project worth a billion dollars – unusable in about 20 percent of cases, reports Shannon Hall at The New York Times.

Researchers are currently updating their calculations to see how they have been affected by the company’s new plan with more than a threefold increase in the number of satellites. SpaceX, for its part, said it would work with astronomers to reduce the shine of satellites: there was a suggestion to paint them black, but this will not affect the solar panels, which give most of the glare. In addition, painting in dark color will significantly increase the heating of spacecraft, which may affect their performance.

Shooting of the sky over Germany with shutter speed in 2018. It is not difficult to imagine what will happen when tens of thousands of satellites become available.

Such mega stars will also change the sky for the general public. After completion of the work on the night sky will be four to five times more Starlink satellites than the visible stars. Actually, from some places of the Earth it will be visible 500 satellites simultaneously, according to calculations of astronomer Alex Parker.

Of course, residents of cities who consider themselves lucky to see Jupiter on a clear night, most likely, will not notice the changes, but residents of rural areas with less light will observe a completely different night sky. “I’ll wait to see what happens when they reach their working orbits, but I don’t expect anything good after watching the first photos of the test satellites taken from Earth,” Parker wrote on Twitter after the first launch.

On the other hand, Mask believes that satellites will not affect astronomy, and that the economic benefits of the global Internet represent a “greater good. He also tweeted that the future of astronomy lies in space anyway.

Another problem that concerns astronomers and, again, is related to the number of satellites is the safety of near-Earth orbit flights. With so many spacecraft, it is a matter of time before a fatal failure of one of them (especially since only 55 of the 60 satellites launched in May are operational), and a collision of a pair of satellites can lead to a swarm of debris.

The tiny particles of satellites moving at several kilometers per second are literally bullets that can damage other vehicles in orbit, causing an avalanche of debris and, in the worst case, the failure of most of the probes in operation. Given that the time of orbital decay of half a thousand kilometres is years and decades, this could be a very long time to close space for us.

The problem is aggravated by the fact that other companies, such as Amazon, OneWeb and Telesat, have also expressed their desire to create their own mega stars, so that the total number of satellites in near-Earth orbits may grow to hundreds of thousands over the next couple of decades. And apparently, many of the international space laws and regulations that were often written 30-40 years ago, when there were only a hundred or so working satellites in space, are no longer working, and they need to be urgently modified.

This is the only way we can get a safe space and the opportunity to look after the stars, and hopefully astronomers and private space agencies will be able to agree.