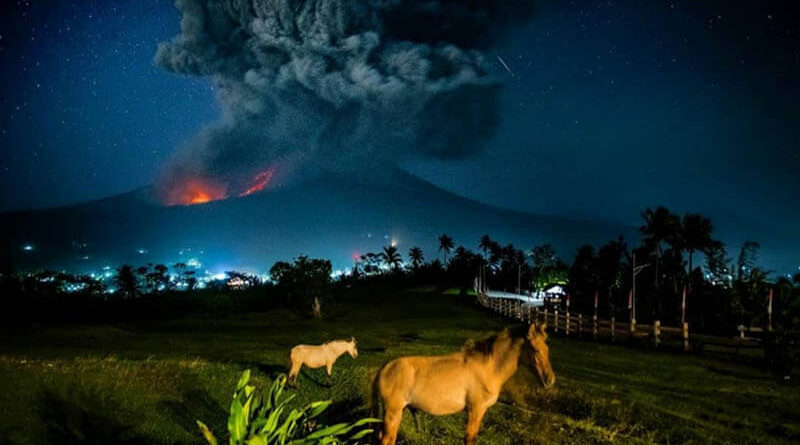 Tectonic processes are one of the most important natural factors shaping the development of civilization. Of the thirteen ancient civilizations of the Eastern Hemisphere, twelve were located along the southern edge of the Eurasian plate.

People are used to living side by side with volcanoes. Volcanic soils are fertile because volcanic ash contains minerals that plants need, such as potassium and phosphorus and trace elements (Zeilinga de Boer and Sanders, 2002). Mineral deposits and hot springs are often associated with volcanoes.

Today about half a billion people live within 100 km of active volcanoes. In Naples, the windows of real estate agencies are stained with offers to buy a plot of land or a villa on the slope of Vesuvius. And the locals do not think it’s black humor.

But still, sometimes you have to pay a high price for this neighborhood. Over the past four centuries, volcanoes have killed an estimated quarter of a million people. These are just the direct victims, not counting those who died of famine and epidemics following the eruptions.

Even at the dawn of its development, humankind had to undergo one of its most severe trials. 74,000 years ago, the Toba supervolcano in Sumatra erupted, tens of times more powerful than any of the catastrophes of the past millennia. This eruption coincided with the transition from the interglacial to the next glaciation and may have accelerated it. According to genetic studies, the modern inhabitants of the Earth are descended from a small population of a few thousand people. Perhaps it was the Toba eruption that was the bottle-neck through which mankind passed (Rampino, Ambrose, 2000).

One of the most powerful natural disasters in historical times was the eruption of the volcano Santorin, also known as the Minoan eruption. It was so violent that a crescent-shaped fragment was left of the island of Thera, where the volcano was located. By radiocarbon analysis of an olive branch buried alive on the slope of the caldera in a layer of volcanic sediment, it was possible to establish an approximate date of the eruption – 1627-1600 B.C. (Friedrich, 2006). Another confirmation of the dating is the frost-damaged annual rings of trees found in different locations in the Northern Hemisphere, in particular in Lapland (Helama et al., 2019). The climatic anomaly recorded in them dates back to 1627 BC.

In 1939, the Greek archaeologist Spyridon Marinatos suggested that the cause of the collapse of the Minoan civilization was the eruption of the volcano Santorin. In 1967, Marinatos discovered under a layer of ash the ruins of a Bronze Age city comparable in size to the ruins of Pompeii.

The site is now known as Akrotiri, after the name of the nearest village. During the excavations, frescoes and household items were found here, but no jewels or unburied remains were found. It seems that the inhabitants had time to leave the settlement. The tsunami that resulted from the eruption reached the northern coast of Crete. However, what role the Santorin eruption played in the collapse of the Minoan civilization is not yet clear.

Echoes of this natural disaster have reached us in the “Theogony” by Hesiod, in that fragment where the battle between the Olympians and the titans is described. Its central character is Typhon, the son of Gaia and Tartarus. The battle between Zeus and Typhon is probably a metaphor for the Minoan eruption. Tiphon himself is a rather accurate description of a column of volcanic ash (Athanassas et al., 2018). Recall that, according to Greek mythology, Tiphon was buried under Etna and caused its volcanic activity.

Eruptions that would affect life on the planet as a whole are, fortunately, rare. Generally, the effects are regional, and in most cases, people adapt to life near volcanoes. Eruptions that cause a rupture in cultural tradition are the exception rather than the rule (Grattan, 2006). Even in Iceland, with its small population, scarce resources and harsh natural conditions, the catastrophic eruption of the Eldgjau volcano did not cause the inhabitants to abandon the island. The eruption occurred in the spring of 939, shortly after the settlement of Iceland by the Vikings. The account of this catastrophic event comes down to us in the song “Völva’s Soothsaying,” which describes the death of the pagan gods and the end of the world. It is most likely that the song was written by an eyewitness of the events. Perhaps it was this catastrophe that undermined the Icelanders’ trust in the old gods and led them to embrace Christianity in 1000 (Oppenheimer et al., 2018).

Ash and gases released by volcanoes as high as 20-25 km affect the global climate. Volcanoes at tropical latitudes can affect both hemispheres. High-latitude volcanic emissions predominantly remain within the hemisphere, as there is little air flow across the equator. From the lower atmosphere, particulate matter is removed in a matter of days. In the stratosphere, their residence time reaches a year or more.

Volcanoes emit little carbon dioxide, and it has no noticeable effect on the climate. The main problem is sulfur dioxide. In the stratosphere, it oxidizes and reacts with water vapor to form sulfuric acid. Aerosols consisting of droplets of sulfuric acid absorb sunlight, heating the atmosphere at heights of 20-25 km and shading the surface of the Earth. Over the course of a year, the concentration of sulfuric acid in the stratosphere is approximately halved. The effects of Icelandic volcanic eruptions last about a year, while eruptions at the equator can affect the climate for 2-5 years (Oppenheimer et al., 2018).

The Toba supervolcano eruption was followed by a dramatic cooling, with temperatures dropping 10-15 °C in places and 3-5 °C on average for the planet. The severe cooling lasted one to two decades, with several centuries being colder and drier than before the eruption (Williams, 2012).

Smaller eruptions also affected the climate. For example, the effects of the Eldgjäu eruption have been felt far beyond the borders of Iceland. Historical chronicles recorded harsh winters, spring and summer droughts, and famines in Europe, China, and Iraq. Northern Hemisphere summer temperatures dropped by about 0.7-1.5 °C. A similar eruption to the Eldgyau eruption of the Lucky volcano occurred in 1873-1874. As a result, almost all the livestock in Iceland died of volcanic poisoning. A famine began and one in five islanders died from it.

After the strongest eruption of the Tambora volcano in 1815, Western Europe and North America suffered a cold snap, known as a year without summer. But every cloud has a silver lining. The incessant rains caught Lord Byron and Percy Shelley and his wife on Lake Geneva. To entertain his guests, Byron suggested composing a ghost story. The result of the writing contest was Mary Shelley’s Frankenstein. Byron himself, under the impression of a year without a summer, wrote the poem “Darkness.”

Natural cataclysm became a source of inspiration not only for writers – in the same year, the German inventor Baron Carl von Drez, the future creator of the dresina, built a prototype bicycle – rising oat prices forced him to look for new means of transportation.

A series of large eruptions can lead to cold weather on the scale of decades. The catastrophic eruption of an unknown volcano in 536 marked the beginning of the Little Ice Age of Late Antiquity (Buntgen et al., 2020). Summer temperatures in Europe dropped by 1.6-2.5 °C (Sigl et al., 2015). It was soon followed by the catastrophic Ilopango eruption in Central America in 539/40.

The series of powerful eruptions occurred during the Little Ice Age. It probably began with the most violent eruption of the Samalas volcano in Indonesia in 1257 over the last 6 thousand years (Lavigne et al., 2013; Guillet et al., 2017).

Volcanic eruptions and subsequent climatic cataclysms often brought with them diseases. They can be caused by forced migration after natural disasters, starvation, and hygiene problems. Following two major eruptions in 536 and 540 and a severe cold snap, the Justinian plague (541-543) was the first major epidemic to affect the Mediterranean, the Middle East and Europe. About 50 million people died as a result (Sigl et al., 2015).

Cholera in Asia, which began in 1816, is associated with the eruption of Tambora. A few years later it reached Russia. In 1830 the epidemic engulfed Moscow and St. Petersburg, provoking numerous cholera riots. Because of the quarantine Pushkin was forced to spend three months at the Bolshoye Boldino estate, where, under the influence of recent events, he wrote The Feast during the Plague.