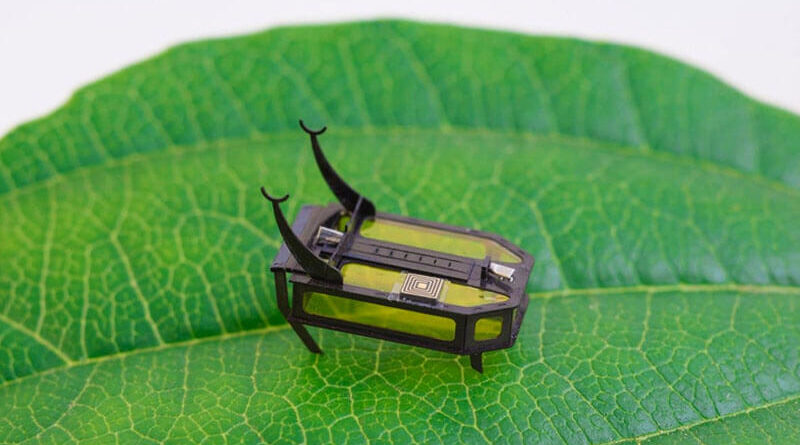 It’s no secret that one of the most serious restrictions for robots is food. Most robots need a lot of it, and it has to come from somewhere, and it’s usually a battery, because there aren’t many other good options. Batteries, however, are known for their low energy density, and the smaller the robot, the bigger the problem. In addition, converters are needed to convert the energy stored in the battery into useful work, which is also a problem for small robots.In an article published this week in the journal Science Robotics, researchers at the University of Southern California in Los Angeles talked about the four-legged work of an 88-mg RoBeetle that runs on methanol. Liquid fuel energy is used to move without being converted into electricity.

The RoBeetle case is a square-shaped fuel tank that can be filled with methanol through the inlet using a syringe. The rear pair of legs is fixed, and the front is spring-loaded and attached to the transmission, which moves them simultaneously. The RoBeetle design includes an “artificial muscle” that is heated by the catalytic oxidation of methanol vapor entering through the holes in the movable damper. In essence, it is a thin wire of nickel-titanium alloy coated with a layer of platinum, which acts as a catalyst. As it grows, the “muscle” moves the front legs and closes the valve. In the absence of methanol vapors, the reaction stops, the wire cools and compresses. This opens the damper and the cycle repeats. The process is clearly shown in the video. The maximum speed is 0.76 mm / s, and one refueling is enough for 155 minutes. By the way, a small breeze accelerates the movement, promoting the reaction.

The payload of the RoBeetle can reach 230 mg, which is quite enough, say, for passive sensors, but, in fact, the robot has no practical application, because it moves continuously until it empties the fuel tank, and only directly. In addition, despite the very high specific energy of methanol, it is an extremely efficient way to power a robot with an estimated throughput efficiency of only 0.48%. However, RoBeetle is a clear demonstration of how you can create a robot so small that it is not suitable for battery power. The fact is that the lightest commercially available battery, capable of providing enough energy to heat the actuator, weighs about 800 mg, which is an order of magnitude more than the weight of RoBeetle. From this point of view, the efficiency of RoBeetle is actually quite high.