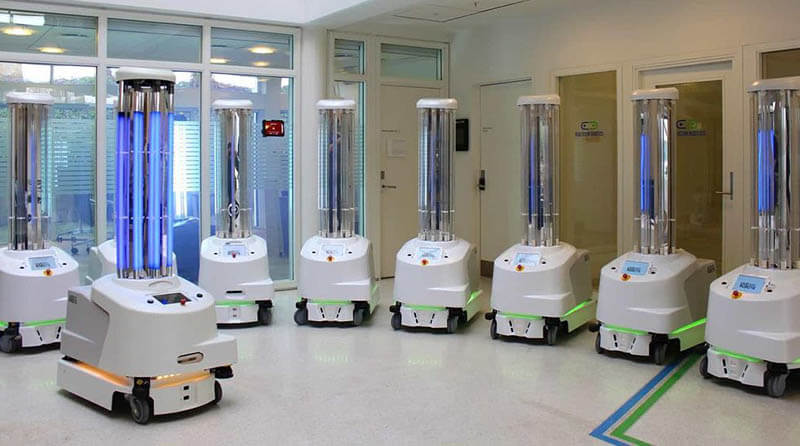 The European Union has started supplying centrally purchased robots for disinfection of premises to EU countries, which will be used in European hospitals involved, in particular, in the treatment of patients with COVID-19. “Today, two hospitals in Slovenia received the first two works purchased by the European Commission for the disinfection of hospital wards to help curb the coronavirus from spreading. Another 29 such disinfection robots are designed for hospitals in Belgium, Denmark, Germany, Estonia, Ireland, Greece, Spain, Croatia, Lithuania, Luxembourg and the Netherlands.

These works can disinfect the standard room in just 10 minutes using ultraviolet radiation, and treat 18 such rooms on a single charge, “- said in a statement. It is noted that the use of disinfection robots will reduce the risks for patients and medical staff, as well as harm to the environment, because the robot uses the physical properties of ultraviolet light instead of using chemical disinfectants. Such devices are controlled remotely.

The disinfection works were produced by one of the Danish companies that won the tender announced by the European Commission for the supply of disinfection robots. In total, the European Commission, through the so-called Emergency Support Instrument, has allocated 12 million euros for the purchase of 200 such cars. As Ukrinform reported, after the outbreak of the COVID-19 pandemic in the spring of 2020, the European Union faced a shortage of basic medical equipment, including protective masks, respirators, medical protective suits, test reagents, ventilators and more.

To address the problem, the European Commission has set up a special fund under the EU Civil Protection Instrument rescEU to create permanent reserves of such equipment. Today, emergency medical supplies are located in Belgium, Denmark, Germany, Greece, Hungary, Romania, Slovenia, Sweden and the Netherlands. The cost of the equipment, as well as its storage and transportation is fully paid by the European Commission.