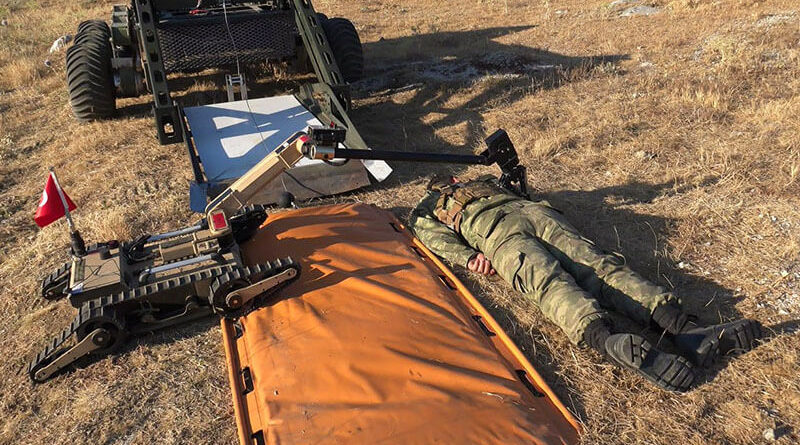 Evacuating the wounded directly from the pain of battle is not an easy task, because in such operations, very often the military medics themselves come under fire. Moreover, sometimes, the enemy deliberately ambushes the wounded, so as to strike at the rescuers. To minimize losses during transportation of the wounded, Turkish company Elektroland Defense, which specializes in military robotics, presented an interesting development Boğaç.

It is a three-axle (6×6) self-propelled electrified platform with remote control, which works in pairs with another smaller platform, on the track. Both of these platforms are approaching a wounded soldier. The one on the crawlers grabbed a man by his belt or by his clothes and dragged him onto an inflatable stretcher, which is then pulled up to the wheeled platform with a winch. All this is remotely controlled by the operator from the hiding place.

Well, that’s a good idea. True, this concept also has disadvantages. First, if a fighter is injured in the spine, then with such a mechanical evacuation, his condition can only be aggravated. Secondly, self-propelled platforms are also vulnerable and can be fired upon. However, the main advantage of the development of Elektroland Defense is that during the evacuation of the wounded from the battlefield, military doctors or other soldiers who are ready to come to their aid remain unharmed.