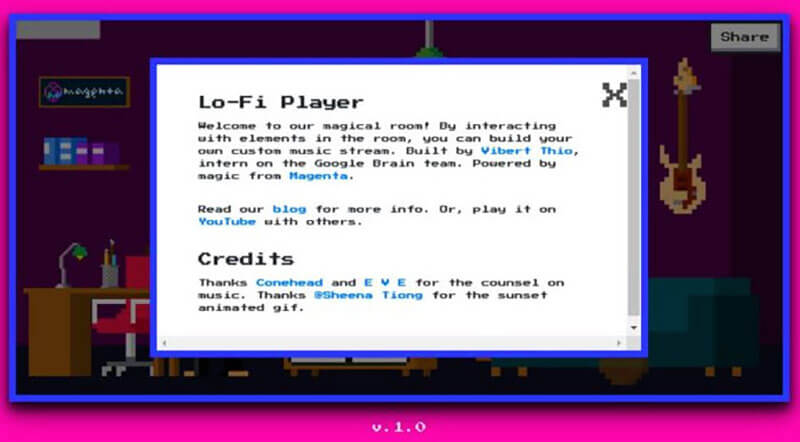 Google continues to surprise and pleasantly surprise its fans and it is not only about the mobile devices of the company but also about some interesting internet services. And today it became known that the company has released a rather unique internet player called Magenta Lo-Fi Player, intended for all fans of the so-called Lo-Fi music genre, by means of which users can independently record and connect the samples available directly in the player. Such a unique game project has already managed to win some local popularity, as the genre of Lo-Fi has become very popular on YouTube over the past few months.

Many users could watch and stumble upon such channels and videos that continuously spin Lo-Fi music, usually combining elements of hip-hop, jazz and generally relaxing electronic music, which results in such a high level of addiction to this genre among the widest range of digital music lovers.

Due to its softness and unobtrusive, this genre has also managed to become one of the most popular music tracks, and therefore Google decided to keep up with modern trends and offer its users a full opportunity to create their own music track within this genre – and the player Magenta Lo-Fi Player looks like a pretty cute retro pixel interface with the ability to interact with various graphic elements, each of which has its own music. Such a flexible approach to the case and became the main reason why this virtual player has managed to gain popularity.

However, the responsible Google development team notes that the work on it is not quite complete, and that in a relatively short time it will present some additional options and extensions for the player – we can only hope that Google will go a non-standard way and will be able to offer some advanced features for digital music lovers. Some users even predict the start of conceptually new online music services, tied to the use of such popular music formats.