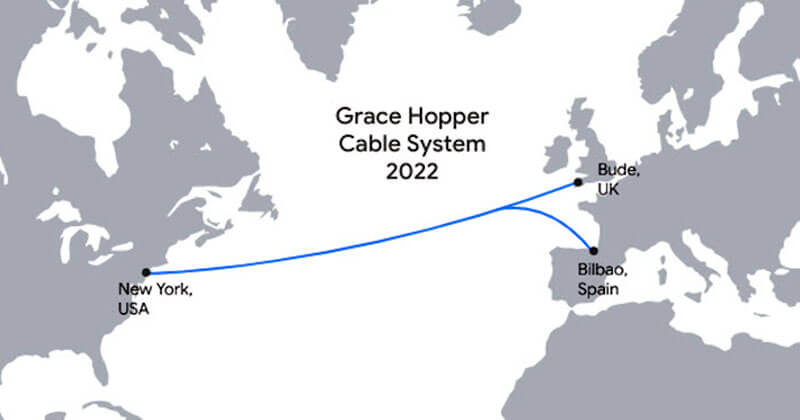 Google will connect the U.S. and Europe with an underwater Internet cable for high-speed data transmission, which will connect New York, English Bude and Spanish Bilbao.

According to the company’s official blog, the new Internet channel, which will be named Grace Hopper Cable Sistem (in honor of innovator and pioneer in programming Grace Hopper) will be connected to other Google cable systems, such as Curie (USA – South America), Deunan (USA – France) and Equiano (Europe – Africa).

The new channel should meet the growing need of users for reliable and high-speed Internet, as well as for uninterrupted operation of Google services – Meet, Gmail and Google Cloud, used by millions of people daily.

The laying of the cable will begin in the near future and its commissioning is scheduled for 2022. The work will be carried out by SubCom, a company headquartered in New Jersey, which has previously successfully implemented the projects Dunant and Curie.

The Grace Hopper project will be the fourth Google-owned submarine internet channel. In addition, the company is also a member of several consortia that jointly operate submarine fiber optic systems around the world. In total, Google has invested in 15 such projects, particularly the Blue-Raman Cable, which is to link Italy and India through Israel.

It should be noted that Microsoft and Facebook are also co-owners of a similar high-speed Internet channel that linked the United States (North Virginia) and Spain (Bilbao) in 2018.