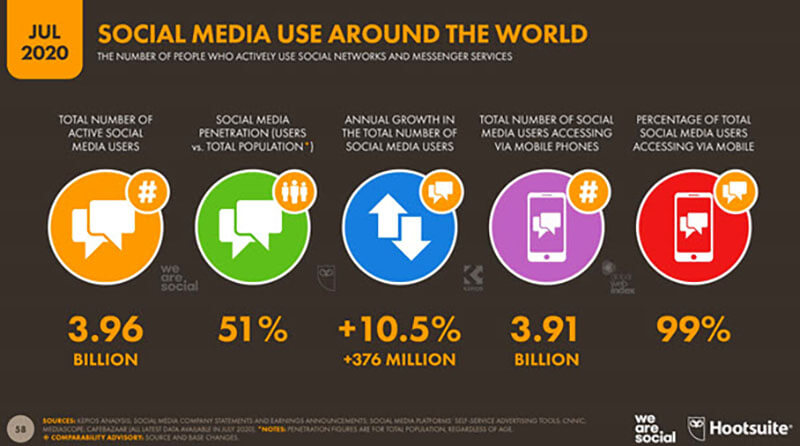 Every second, 12 people register on the social network.

The global audience of social media has reached half of the world’s population. This is stated in the report of Digital 2020 companies We Are Social and Hootsuite.

According to the research as of July 2020, the global audience of social networks reached 3.96 billion people, which is 51% of the total population of the planet. At the same time, the global Internet audience grew by 8.2%, while the number of unique smartphone users increased by 2.4%.

Among the world’s inhabitants aged over 13 years, 65% have accounts in social networks. Every day their audience increases by one million users, which is 12 people per second.

Per user, on average, there are 8.8 accounts on different platforms. Each user spends 2 hours and 22 minutes daily. It is also noted that about 40% of people use their accounts for work purposes.

The rating of the most popular social networks is headed by Facebook with 2.6 billion users per month. The second place was taken by YouTube and WhatsApp with 2 billion users. Instagram has exceeded the threshold of a billion users, and LinkedIn – in 700 million. Twitter has 326 million active users.

At the same time, the real audience of YouTube and Twitter can be much larger, due to the use of platforms of non-login users.