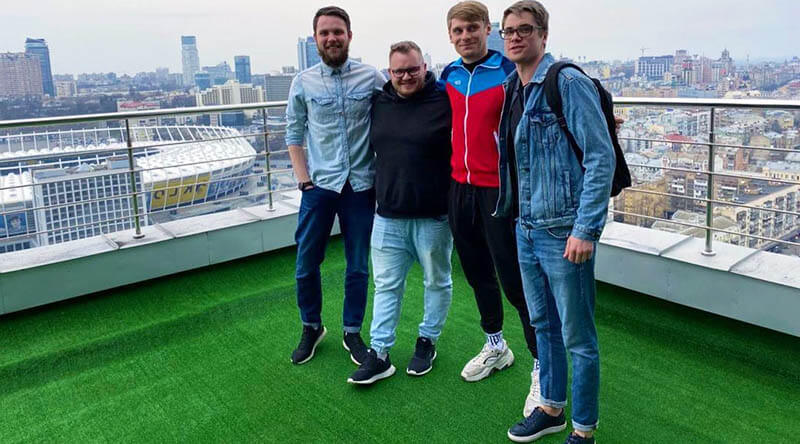 With the help of a “smart” helmet, computer vision and knowledge in the field of neurophysiology, Ukrainian developers manage to penetrate into the depths of the human brain, predicting trends in advertising before it airs and the popularity of music tracks before the release of TikTok-account with a dipshoe of young Tom Cruise made a lot of noise. Beneath the AR mask was a regular person who played golf so realistically and did tricks on behalf of the American actor that it seemed like a new installment of the movie “Mission Impossible.”

Artificial Intelligence (AI) is capable of more extreme tricks in the near future, IT-businessman Vitaly Minyaylo believes. Life extension, replacement of workplaces with neural networks, self-developing artificial intelligence and even virtual prisons are the real prospect of the next decade.

Vitaly has spent the last few years studying in depth the automation of thought processes and writing his PhD thesis on artificial intelligence. In this article Delo.ua together with the expert speculated on how artificial intelligence will help Ukrainians in everyday life and politics, as well as on the experience of connecting the brain to the computer and reading people’s thoughts.

Today, artificial intelligence is used in absolutely different spheres. It performs technical tasks, leaving more time for human creativity. For example, a real case in cinematography: the producer loads the script of the film that has not yet been shot, and AI evaluates the target audience of the future picture, predicts how much the viewer will like it. It takes only six minutes. One of the Belgian companies now offers such a service.

You don’t have to go far. A Ukrainian startup has developed technology to scan the human body. Artificial intelligence and computer vision need only provide a couple of photos from a smartphone to analyze the data. Such a solution can allow the buyer to choose the right size clothes.

“Artificial intelligence is the ability to delegate one’s thinking functions to a program that will do it much more efficiently and faster. For example, a shovel is essentially an analog of a human hand that is much more productive at digging. When a self-developing artificial intelligence emerges, it will do the work for us. It will be a different world, but no less interesting,” Vitaly Minyaylo gives an example.

Vitaly is currently writing his dissertation on artificial intelligence at the Kyiv Polytechnic Institute. Together with his Neurotrack team he is also developing software using machine learning and neural networks. With the help of a “smart” helmet, computer vision and knowledge in the field of neurophysiology it is possible to penetrate into the depths of the human brain. The Ukrainian development makes it possible to predict trends in advertising before it airs, the popularity of music tracks before they are released. This is called neuromarketing, a technology that is popular in the West but is still emerging in Ukraine.

Eye tracking, heart rate, facial expressions, and brain activity are tracked during various activities. For example, scrolling through a website. The team already has several cases with showbiz stars, when an artist measured the degree of popularity of new songs.

“A helmet with special sensors shows the level of engagement and concentration when watching a video or listening to a song. Now after such a study, it takes time to decipher the graphs on the computer – first the data is collected, and then it is analyzed by a specialist – a neurophysiologist. This year we started to develop a product that automates this system and quickly gives out the results of brain activity. We are investing in artificial intelligence in this area in order to start reading people’s thoughts faster and reach a whole new level,” said Vitaly Minyaylo, co-founder of Neurotrack.

Many Ukrainian IT specialists work on advanced developments in the field of AI, but mostly on Chinese and American projects. However, large investments in these markets play a decisive role. Ukraine is still a kind of a raw materials appendage in the global AI community. Government attention to this sector could accelerate the movement from raw materials to the product.

In Ukraine, this could be realized at the level of super safe cities and digitalization of relevant agencies. Here are 5 solutions that could improve our lives right now:

1.”Smart” traffic lights, in which the neural software is embedded and independently analyzes the traffic congestion and optimizes their work.

2. Prediction of utility accidents. Artificial intelligence with the help of special sensors could foresee force majeure and detect the same heat losses.

3. Total overloading of state machinery. AI, Big Data and workflow automation can reduce the cost of its maintenance. Instead of paperwork, which takes about 30% of their time, officials will be able to do more important things. With the help of these technologies, it is realistic to reduce the staff in this area by 10%.

4. eliminating bribery with the help of transparent blockchain technology. The decentralized system works on the principle of “Everyone sees everyone,” and such a tool is sorely lacking today.

5. Telemedicine and artificial intelligence. AI can qualitatively improve the healthcare system. For example, an AI surgeon will help with complex surgeries, using a scalpel with surgical precision, eliminating the human factor and possible mistakes.

Today in Ukraine a concept of artificial intelligence until 2030 has been created. In addition to encouraging students and grants for research in this area, the concept contains some fairly applied things – the use of AI in the defense sphere, the prevention of dangerous phenomena through data analysis, improvement of electronic government registries and strengthening of cyber defenses.

According to Vitaly, a new wave of technologies will come into our life when self-developing AI appears – a machine which will be able to independently and adequately generate theoretical hypotheses, test them in practice without human participation, and apply new knowledge to accelerate and optimize its software and hardware. There will be a tectonic shift in all spheres of life. Social relations will change first of all.

Automation of human thinking activity will create an unprecedented number of man-hours to solve any task. The emergence of new productive iron will allow scaling research in different directions and will spend much less time on this than training specialists from scratch or re-training them.

“And here it’s not just about the economy, but also about quality, safety of life and development of society itself. Kurzweil predicted reaching the singularity, that is, the stage when the planet will become one big technological machine, by 2040-2050. Self-developing AI technology may well become a reality in ten years or as early as the next few years. Of course, it is important to use this technology exclusively for good,” emphasizes the IT-businessman.

We can already see the first attempts of Ilon Musk to directly connect a computer to the human brain, bypassing the senses. There was the movie “The Matrix”, and now it is being implemented in the Neuralink project. The first video game chip has already been implanted into the brain of a monkey, and now it can play intelligent ping pong with the power of its mind. What’s next? This technology will take a leap right after the emergence of strong artificial intelligence. What might be the consequences? For example, instead of the prisons that exist now, adaptive programs in virtual reality may emerge, where AI will gently reshape the aesthetics of criminals toward legitimate ways to get satisfaction out of life without plunging the individual into suffering.

One of the main goals of creating strong AI is to prolong human life. Today, startups that aim to slow the aging process are trending in Silicon Valley.

You don’t have to work in California to create a self-developing artificial intelligence. The key to this new reality can be picked up very soon, either by a giant corporation or by just one person from anywhere on the planet. Each of us can bring this technological and bright future closer by studying, developing and popularizing the idea of the emergence of strong artificial intelligence.