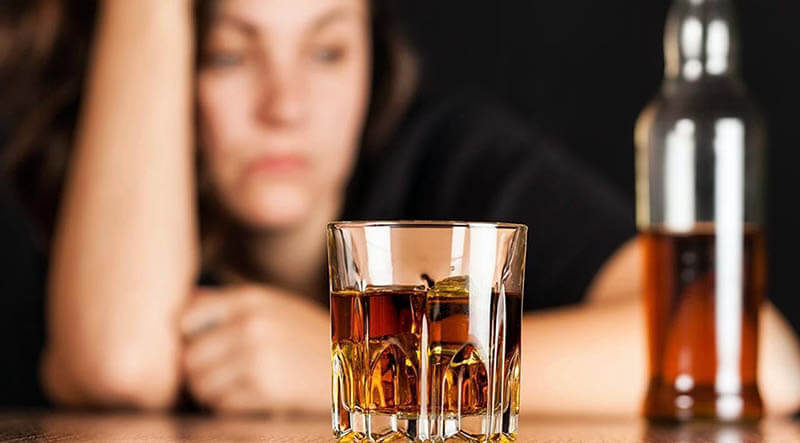 Why does alcoholism occur in women? Common Causes

What are the characteristics of female alcoholism?

What are the dangers of female alcoholism? Consequences of addiction

How to help a drinking spouse? Instructions for the husband

Female alcoholism is dangerous because it is hard to see. It develops quickly, but women carefully conceal the problem, preferring to drink alone. According to statistics, female alcohol addiction most often develops between the ages of 28 and 45 for a variety of reasons. On how to help a drinking wife and how to act when you discover the problem – see below.

Why does alcoholism occur in a woman? Widespread causes

What to do if my wife drinks alcohol? The first thing to do is to find the cause of the addiction. Most often it is psychological problems, which can be associated with excessive female emotionality. Among the most common causes of alcoholism in your wife or your girlfriend are:

Feelings of loneliness and unneededness,

loss of a loved one,

What are the peculiarities of female alcoholism?

Alcoholism in women is virtually no different from alcoholism in men. However, research proves that abuse of alcoholic beverages by women manifests itself much more quickly.

Other features of female alcoholism that you need to be aware of:

Emotionality. Women are more susceptible to stressful, anxious and neurotic situations than men, because the activity of their nervous system and brain is more based on intuition;

High sensitivity of the liver to ethanol alcohol. The liver cells are damaged more quickly when abusing alcohol than in men, so they are much more likely to develop cirrhosis of the liver;

Reduced excretory function. Unlike men, women’s metabolic processes in the body are slower. This means that toxins will be eliminated slowly, accumulating in the soft tissues.

10 signs that indicate the development of female alcoholism

Consuming alcohol, women can not give an objective assessment of their behavior. That is why even when intoxicated they do not notice the real problem of addiction (low self-esteem, lack of attention from the husband, poor relationships with their own children, etc.).

The sooner you discover an addiction, the sooner you can help your loved one. However, women often hide the addiction, so identifying it in the early stages is not an easy task.

10 signs that indicate your wife is drinking alcohol in excessive amounts:

Constantly looking for a reason to drink. If your wife regularly suggests a drink, looking for even a minor excuse (birthday party at a distant relative’s son, good mood, etc.), you need to be wary.

Aversion to the problem. All alcoholics, including both men and women, do not recognize the problem. They believe that at any time they can give up drinking alcohol, but in reality this is not the case.

A gradual increase in the amount of alcohol. The portion of alcohol becomes larger each time, in order to reach a state of intoxication more quickly. At the same time, the woman increasingly chooses strong alcoholic beverages (vodka, cognac, etc.).

Refusal of snacks. Alcoholics gradually lose their appetite. They do not need snacks to achieve intoxication. Even during a feast, the woman will drink more and her plate will be almost empty.

Secrecy. Unwillingness to communicate with relatives, close friends and co-workers who might guess about her addiction. Hiding conversations with new buddies (drinking buddies) or the unexpected appearance of “old acquaintances” whom the wife has not seen in years.

Inadequate behavior. It occurs already in the later stages of dependence, when the woman does not get the former pleasure from alcohol. Inadequacy manifests itself in unreasonable aggression, anger, sudden mood swings, etc.

Decrease of intellectual abilities. The first thing that comes under attack in alcoholism is memory. Gradually the performance of the brain decreases. During this period, alcoholic wives lose their jobs or drop out of school.

Irresponsibility. Neglect is seen in all areas of life, including the family life. The wife stops paying attention to her children and spouse. The house is usually a mess, as alcoholics fail to cope with even simple family duties.

Change in appearance. Pay special attention to this sign: the skin color changes (it becomes yellowish), puffiness and puffiness appear, bags under the eyes are observed. The color of your teeth deteriorates, as well as the condition of your hair and nails. There is a specific smell of alcohol.

Weight gain. On average, with alcoholism, women gain about 6-7 kg of extra weight. In some cases, this is due to the fact that the liver under the influence of ethanol alcohol gradually increases in size.

Several or all of the signs correspond to your situation? Don’t hesitate – discuss the problem with your spouse and start taking action now!

What are the dangers of female alcoholism? The consequences of addiction

Female alcoholism is one of the most dangerous diseases. It develops quickly, leading to severe and irreversible consequences for the entire body. Excessive consumption of alcoholic beverages affects not only the appearance of the woman, but also the functioning of internal organs (liver, kidneys, heart and blood vessels, respiratory center, etc.).

If not treated, alcoholism will inevitably lead to death due to internal bleeding, ascites, sepsis or infectious diseases resulting from cirrhosis of the liver.

If you don’t know how to wean your wife from drinking alcohol, tell her in detail about the negative consequences:

Damage to brain cells and structures,

the occurrence of positional pressure syndrome,

cirrhosis of the liver,

For the successful treatment of alcoholism in women, it is important to determine the stage of addiction. In total, there are 3 stages, each of which has characteristic signs:

Compulsive desire to drink, arising at work, with friends, during recreation, etc. The woman’s body gradually gets used to ethanol. She begins to look for her own reasons to drink (for example, to lift her mood).

At this stage, a strong withdrawal syndrome (“hangover”) is formed. Signs indicating the presence of physiological and mental dependence on alcoholic beverages arise. The binges become more frequent and longer.

It is characterized by irreversible consequences both in an organism, and mentality of the woman. The work of the nervous system and the brain is disturbed. Not excluded multiple organ failure, leading to death.

How to help a drinking spouse? Instructions for the husband

The most important thing is to decide if you are ready to fight for the woman you love. Alcoholism treatment requires not only your support, but also patience. You will need to surround your spouse with care, attention and love. Let her know that she is not left alone with her problem, because you are ready to help solve it.

Drug treatment is the only chance to overcome alcohol addiction. The main thing is to complete it to the end, without interruption and without stopping.

Your actions, how to make your wife stop drinking alcohol:

Contact a drug treatment clinic. If the woman refuses treatment, use an intervention (motivation) service.

Wait for detoxification. Most often it is done with infusion therapy (IV) for 3-5 days.

Support during medication therapy. It includes the recovery of the body after a long period of alcoholism.

Enroll your wife in psychotherapy. Individual and group work with a psychologist is aimed at identifying and eliminating the causes of alcohol dependence.

Help with adaptation. Returning to a sober life after treatment is a complex process. Be there for your spouse to help her overcome stressful situations at the right time.

Now you know what to do if your wife is drinking, and how to help her cope with this problem. Do not give up, because unsolvable situations do not happen. Remember that your attention, care and desire to help can save your beloved woman and family from alcoholism!