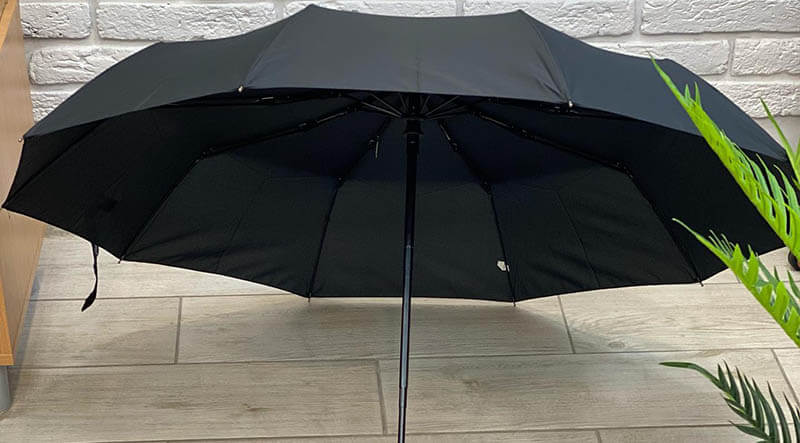 According to historical facts, the first umbrellas, mentioned in the 10th century AD, served primarily as shelter from the sun.Scientists are still unable to come to a general conclusion, where they were first invented – in the Far East or in Egypt?

And only two and a half centuries ago in Britain began to use umbrellas as a means of protection against rain. Since then, such simple designs allow us to go “dry out of the water.

Usually an umbrella is that everyday accessory that is purchased for at least several years, and in order for it to serve for a long time you need to consider various factors. They are few, but knowing them will definitely help not to make a wrong choice.

Umbrellas also refer to those items that have an age and gender. Today we will talk about how to choose an umbrella for men and what to pay attention to in the first place.

Women’s umbrellas are usually multicolored, interesting prints and ornate patterns, and some models are supplemented even with lace or braid.

But, of course, for men such “favors” are not suitable. Men’s umbrellas are made in a restrained and neutral colors – in black, brown, dark green, navy blue and various shades of gray.

If we talk about prints and patterns, it is often a check (from simple to “Scottish”), stripes or strict geometric patterns. But monochrome options are much more popular among the stronger half.

Deciding on the type of umbrella

All existing umbrellas are divided into two types – folding and umbrellas, canes.

Folding type umbrellas appeal to its compactness and portability – the smallest umbrella in the folded form can be only 15-18 cm. It can easily fit even in a small bag, and thanks to its low weight, even a long stay with an open umbrella in hand will not cause fatigue.

The basis of such an umbrella is a telescopic rod, which usually has two to five folds. The more folds, the less space will occupy the folded umbrella, but its dome will be smaller in diameter. The optimal umbrella is considered to be three folds.

Choosing a folding umbrella you should pay attention to the reliability of the frame and spokes, so that the accidentally applied force did not cause a breakage of the umbrella. And one more thing – the less foldable parts, the more durable the entire structure.

Umbrellas, canes even in a folded form look very impressive, so they play a role not only “a roof over your head” during bad weather, but also act as a graceful accessory to your image. Due to their design canes usually create a more rounded dome compared to the flatter surface of folding umbrellas.

Their design is as simple and durable as possible – the spokes are not folded, and even in the closed state keeps the invariability of form. Umbrellas, canes are considered more reliable in comparison with folding models, but their main disadvantage is the size.

They are long enough and there is no way to reduce their size. If you have a lot of running around town planned for the day, such an umbrella can even get in the way. Plus umbrellas, canes are leaders in the ranking of “the most forgotten things” – they are very convenient to hang by the handle in some secluded place, but do not always manage to remember in time that you came with an umbrella.

Which umbrella is better: a mechanical, automatic or semi-automatic?

A mechanical umbrella. These umbrellas have long established themselves as the most durable and reliable. With careful handling of mechanical models can serve for years and years. Typically, these umbrellas are cheaper than automatic and semi-automatic counterparts.

The main feature and disadvantage of mechanical models is the opening of the dome – you have to do it manually. In the process will involve both hands, which is not always convenient, especially when the hands are busy bag or need to make changes in public transport.

Semi-automatic umbrella. Perhaps the most common type of umbrella today. Open these umbrellas by pressing a button, and you have to fold it by yourself.

In fact, it is a compromise between two separate mechanisms: the reliability of the construction is taken from the mechanics, and the convenience and speed of opening the dome are borrowed from the automatic. By the way, semi-automatic models usually have a medium price category.

The system “automatic”. The variant is the most convenient and fastest. The opening and closing of the umbrella is carried out automatically – by pressing a button. Sometimes this mechanism is called “double automatic”.

The quality of materials

As usual, we meet by the clothes. And the first thing that catches your eye at the sight of an umbrella is its dome. More precisely the material from which it is made. After all, the more durable and reliable the material, the better it will protect from rain and longer retain its effectiveness. What types of fabrics are used for modern umbrellas?

Nylon. The most inexpensive material that is used for umbrellas. In addition, nylon is quite thin and short-lived, so it is inferior to other materials in terms of reliability.

Eponge. A kind of polyester with an addition of cotton thread. Represents a new generation of waterproof materials – quick drying, pleasant to the touch and look more natural (no synthetic effect), which is a bit untypical for umbrellas. The only downside will be the higher price tag.

Polyester. Most models of umbrellas on the market are made of polyester. This is incredibly durable, reliable and moisture-resistant synthetic material, which is ideal for the manufacture of an umbrella dome.

Its only disadvantage is its lack of transparency. There is no special luster in it and such umbrellas look quite normal.

Jacquard and satin. These materials are less used in the production of umbrellas, but they look much more advantageous than others.

They are derived from natural silk, so they look more expensive and, as they say, with a claim to sophistication. But originally satin and jacquard did not have a water-repellent protective function, so special impregnations help these fabrics to acquire these qualities. Another disadvantage is their certain “delicacy” – they require careful wear and care.

Polyamide. One of the most wear-resistant materials. The fabric is lightweight, breathable and non-warping, polyamide umbrellas do not require special care and dry quickly. The appearance can be both matte and shiny. But usually such umbrellas are more expensive.

Do not forget about the frame

Reliability of the frame – one of the fundamental criteria in the choice of any umbrella. On the material from which the spokes and the rod depends on the strength and durability of the entire structure.

Aluminum. The lightest and cheapest frames are made of aluminum. But, as the metal is quite soft, this is where its advantages end. Aluminum spokes and umbrella bases usually wear out quickly, and strong gusts of wind can even break the spokes.

Metal and steel alloys. Steel in its purest form is not used now, although such umbrellas would be the most “survivable”. Instead, alloys are used that are lighter than steel itself, but at the same time resistant to wear and tear and reliable in use.

Carbon (or carbon fiber). The material is light and sensitive to impact, but, unlike conventional plastic, carbon is not as brittle, more flexible and restores its shape.

Fiberglass. It is quite widely represented in modern umbrellas, and in terms of characteristics it has many similarities with carbon – the material is lightweight and flexible.

An important factor will be the number of spokes installed in the umbrella. This is the base that holds the stretched canopy. They can be from 5 to 36, but the optimal number is 8-12.

If there are fewer spokes, the umbrella may have a poor tension dome, sag and look somewhat un aesthetically pleasing, and a large number, though it will add respectability in the overall appearance of the umbrella, but the functional load does not particularly have.

Now is gaining popularity system “anti wind”, which prudent manufacturers place in their umbrellas. And indeed – do not really want to feel like Mary Poppins in strong squalls of wind, and end up without an umbrella because of the vagaries of nature.

The storm-proof system is an additional spring on the spokes, which keeps them from breaking during the raging wind. Thanks to them the umbrella can at most bend, but to return it to its working condition, it is enough just to fold the umbrella and open it again. Spokes in umbrellas with an antiv wind system are never made of aluminum.

The bottom line is

So, what is the most important thing in umbrellas? Of course, the frame and its strength, as well as the material from which the dome is made. Choosing the method of opening the most popular system remains a semi-automatic – and the price is reasonable, and comfortable to use.

Type of umbrella – a compact folding or a stylish cane – can be chosen based on personal preferences and conditions of use. For example, if you travel primarily by car, then either type will be convenient, and if you use mostly public transportation, a folding umbrella will be much easier.

If the budget allows, try not to choose the most budget-friendly options. They are not durable at all, and if used in very windy weather, they may become disposable.

And one last thing. An umbrella is like an amulet from the rain: if it is with you – it will not rain!