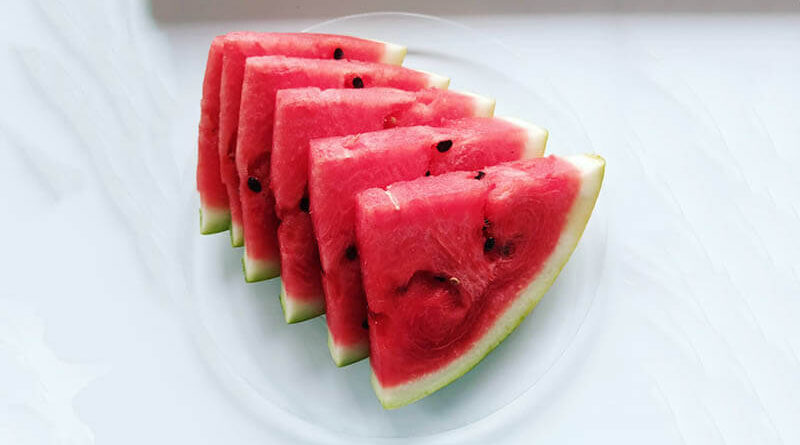 According to a poll on our website, the vast majority of our readers prefer watermelon to melon. But how do you choose a striped one so that you don’t feel painfully sorry for the effort put into transporting the giant? Here are ways to choose a ripe and sweet watermelon

If you tap a watermelon, the ripe one will respond with a ringing sound. If you hear it muffled, it’s not juicy enough. Either it wasn’t ripe or it’s already starting to dry out from the inside.

This advice is probably well known to everyone. And it is probably the most unmistakable. But many people still do not understand: did they manage to get a deaf or a ringing sound from a watermelon? What can I say? Understanding comes with practice. Tap ten watermelons, see the difference.

A ripe watermelon that has reached maturity in the melon field has a dark green, dense rind. It’s hard to squeeze it with your fingernail. But if the striped one was taken off the melon early, the rind has not had time to gain density and it is easy to scratch it.

Of course, quality watermelon rind should not be scratched, pierced or cracked, and should not have brown rotting spots. Cut watermelons and those from which a piece is cut out to show the pulp, it is better not to buy. With a knife, germs are brought into the pulp, which immediately begin the work of spoiling the product. If such watermelon has been standing in the sun for half a day, it is about to spoil. And no one knows how clean the seller’s knife was and whether it might have brought E. coli, for example, into the juicy flesh.

Yes, the green rind of a good watermelon should have a yellow spot. The brighter and more intense the color, the better. The spot is the place where the watermelon was lying on the melon. And if it had enough sun, the spot is yellow. If not enough – it remains pale, whitish. The more sunshine, the sweeter the flesh.

The tail and the “button”.

Folk wisdom says: a ripe watermelon has a dry tail. The practice shows that while the watermelons from melon fields reach buyers in the central part of Russia, the tail will have time to dry up in any case.

More important is the condition of the “button”, the place where the tail comes out. This “button” in a ripe watermelon should also be dry and woody. If you met a specimen with a greenish “button”, look for other goods. It may be from another vendor.

The flesh is bright and juicy. If the cut is smooth, shiny – the berry is either unripe, or has begun to ferment. The color of the flesh in different varieties may vary. There are even yellow watermelons now.

There is an opinion that round watermelons are “girls”, sweeter than oval ones, which are supposedly formed from male flowers – “boys”. In fact, only female flowers have ovaries. So they are all girls. Just not all with a good “character”.

Strongly depends on the variety and the place where it comes from. But if you choose from one batch (and one seller usually has one batch), you have a better chance to get a ripe watermelon if you buy a sample of slightly larger than average size.

It is better not to buy giants and runny ones, as there is a great risk that they were either picked green or overfed with chemicals.

By the way, the ripe watermelon weighs not too much, even if it is big enough. An unripe one has a different density. In water, for example, it will drown. But a ripe one will float. True, so will overripe, dried out ones. So too light striped should be wary.

To choose a ripe and sweet watermelon – take it in your hand, and slap the side with the palm of your hand. From a ripe watermelon, you will feel the recoil with your other hand. It’s firm, springy. An unripe watermelon is soft; the kick in it goes out.

What kind of watermelons are there?

There are only two kinds of watermelon: wild, which grows in Africa, and cultivated – the kind that grows in cucurbits around the world. All others, different in appearance, flesh color, and weight, are varieties and hybrids.

The most popular in Russia are varieties bred by domestic breeders: “Astrakhansky”, “Bykovsky”, “Kholodok”. These watermelons are round or elongated. The round ones have bright, distinct stripes. The elongated ones do not have such a clear pattern, the stripes may merge with the overall color. The flesh is red or bright crimson. Depending on the variety, the watermelon may have a thin or, conversely, thicker crust, large black or small gray seeds.

In addition to green-striped watermelons, there are also watermelons with dark green, white rind and even with a marbled pattern, when on a light background, the green veins form barely visible longitudinal strips.

A famous Japanese variety of black watermelon is “densuke”. In fact, they are not black at all, just the skin has such a dark shade of green that it visually appears black. Because of the exotic appearance and small volume of production, these watermelons are considered to be the most expensive in the world.

The color of watermelon flesh also varies. In addition to the “classic” red and pink, it can be yellow, orange, and white. The most common of the “non-standard” berries with yellow flesh. They used to come to Russia from Asia, but now they are grown in our country as well.

If you don’t like picking pips out of watermelon pulp, try seedless fruits. Opponents of GMO foods need not worry: such varieties are the result of breeding, not genetic engineering.

The benefits and harms of watermelons

Watermelon is rich in magnesium: 100 grams contain 12 mg of this trace element, which is about 60% of the daily allowance. Magnesium prevents the formation of kidney stones and has a beneficial effect on the nervous system. It is also necessary for normal absorption of potassium, sodium, calcium and other useful substances. Watermelon is rich in folic acid, or vitamin B9, which is involved in the work of the circulatory and immune systems.

It is interesting that watermelon pulp contains the amino acid citrulline. The substance is so called after the Latin name of the watermelon (citrullus), from which it was first isolated. This amino acid helps to dilate blood vessels and prevents muscle pain after physical activity.

But there are also contraindications. This berry can not be eaten with kidney stones and gallbladder, some diseases of the gastrointestinal tract, with cystitis and prostatitis.

Pregnant women in the late term should treat watermelons with caution. Because of the diuretic effect of these fruits, women may feel the urge to urinate more frequently than usual.

Every year before the watermelon selling season, Rospotrebnadzor experts warn:

You should buy watermelons only in grocery stores, markets and specially equipped gourds. You should not buy watermelons by the side of the road and public transport stops. The berry absorbs harmful substances contained in exhaust gases, so it may be dangerous for humans.

Fruits should be stored on pallets and under sheds

Sellers should have health certificates

Ask to see documents confirming the quality and safety of watermelons and melons: bill of lading, certificate or declaration of conformity, for imported products – a phytosanitary certificate. The documents must also indicate where the melons came from.

Do not buy cut or damaged watermelon. In the place of the cut or cracked bark, harmful microorganisms multiply. Yes, and the knife can be simply dirty. Sellers are forbidden to cut a piece for a sample and sell the halves. The ripeness of watermelon is better checked by tapping. And if you are not sure that you will eat it quickly, it is better to choose a fruit smaller.

Watermelon or melon should be washed with running water and soap before eating.

Cut fruit is stored in the refrigerator for no more than one day – this is the time during which it should be eaten.

Many people are sure that watermelons are full of nitrates. And when you buy a berry, at home they try to check its content of “chemicals” with a glass of water or a special device. But experts say it is useless: you will not find nitrates in a ripe watermelon. Although they do not deny that fertilizers are used to grow gourds.

Nitrogen is used to stimulate watermelon growth, tell the Research Institute of Melon. But this substance cannot be found in ripe watermelon. Its traces will be found if you check the green, immature fruit.

Vitaliy Kim, director of the farm, also makes no secret of the fact that feeding the watermelons with fertilizer promotes heightened growth. According to him, this makes the fruit larger, but it takes longer to ripen.

Watermelon has at least three properties for which it is valued by weight loss ladies. First, it is low-calorie: 100 grams contains only 38 kilocalories. Secondly, it has a diuretic effect and helps to eliminate excess fluid from the body. Third, it suppresses feelings of hunger. But not everything is so unambiguous.

Dietician Lyudmila Denisenko reminds that any mono-diet, including watermelon diet, is dangerous for the body. According to the expert, during the season you can make yourself a day of unloading on watermelon, but to lose weight, the rest of the time the diet should not be abundant.

It is important to remember about another property of watermelon: it increases the blood sugar level. If a person has an improper body response to a rise in blood sugar, and he does not know about it, then he will not lose weight, but will gain weight.

There are no strict limits, it all depends on the human body. The main thing is not to eat watermelon together or immediately after other food: this leads to increased gas and discomfort in the intestines.

During the “watermelon” unloading days there should be only this product and nothing more, but not more than 3 kg per day. If you are very hungry, you can eat a piece of rye bread or a couple of loaves of bread, says the chief physician of the medical nutrition center, candidate of medical sciences Marina Kopytko.