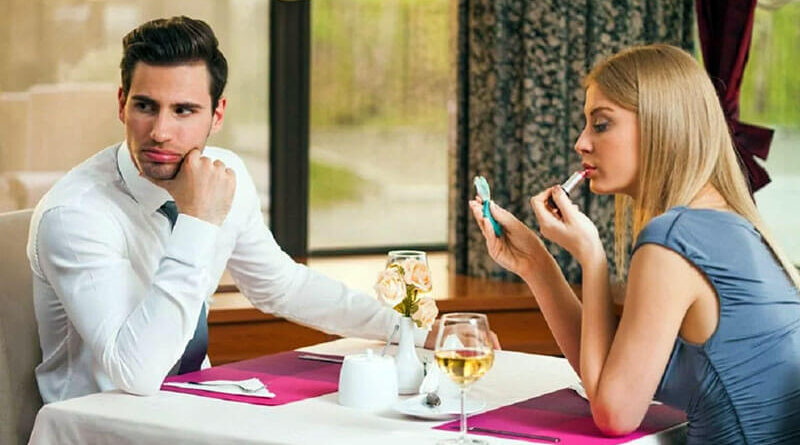 A couple of people land at a free table in front of me in a cafe, and the first thing these two do is not go to the restaurant menu, but to the menu of their phones. They’re chequing. They’re checking the installations. They’re texting somebody. They change their statuses on Facebook. It feels like these two came here for free wi-fi.

The first and most important thing I want to tell you, dear reader: if you want to impress a girl, forget about your mobile phone. Even if you have the tenth iPhone in the platinum case, and you are passionate about impressing your companion with this expensive thing.

You don’t have to put your phone on the table, spin it or report it: “I’m gonna get locked up and order some food!” There’s no need to manipulate the phone at all – put it on vibrate, go deep into a bag or pants pocket, and forget it!

My friend Svetka after meeting with a guy who spent most of his time not with her, but with his new samsung with some incredibly large diagonal (he spent the whole evening telling how cool the camera is and what cool applications are preinstalled on it), from the principle no longer picked up the phone.

“Girls certainly respect the big diagonal, but they love the big dick even more.”

And I recently caught a strange gentleman who regularly texted someone during our three hours walk in the park. “Busy dude!” – I thought, especially since before that he was bragging about a decent position at some ad agency.

In the evening, going to Facebook, I realized that it was not a text – it turns out that during our walk this Internet maniac managed to change at least seven statuses. That is, while we were talking about world cinema, he simultaneously posted some shit on the network like: “Just saw a squirrel!” Guess three times who I removed from my friends that same night?

Even if you get a call, skip the call or answer that you don’t have time right now. Don’t get into long phone conversations, even if you’re an oil magnate and give your broker instructions to sell ten percent of your shares on the Tokyo stock exchange.

Especially stupid looks like a guy who interrupts communication with a girl to answer your mother’s call and tell her that “went to the store, bought cutlets, threw out the garbage”! And do not constantly check your mail from the phone, letting a serious view – of course, girls love business guys and do not like loafers, but it would be better if you do your business somewhere else. Like, at work.

Even if you’re an installagram maniac and don’t eat any salad, sandwich or eclair without taking a picture of them beforehand, forget about your bad habit for a while. You don’t have to check out Foursquare, even if you don’t usually miss any establishments. And try to make sure that at the moment when you are in contact with a girl, no living soul calls you and “banged” the hell out of you. You know how to do that in one fell swoop?

“Put the phone on airplane mode!”

We girls are tired of all this digital shit! Guys are already in the Matrix 24 hours a day – “shooters”, music in the player, calls, chats, social networks. You glue us Vkontakte, make a date on the phone, send greeting cards through WhatsApp and send greetings on Skype.

A little more, and our holograms will start having sex. Screw the phones! Come to a meeting with a pretty girl with empty hands. One of which will have a rose – a simple, analogue rose. Seriously! – You’ll show up without a phone, you’ll be heard as the original.

Option two is either ask her politely to put her cell phone away for the duration of your conversation and make every effort to charm your companion, or… score on this narcissistic gadgetomaniac. I bet she’s got a log in bed.