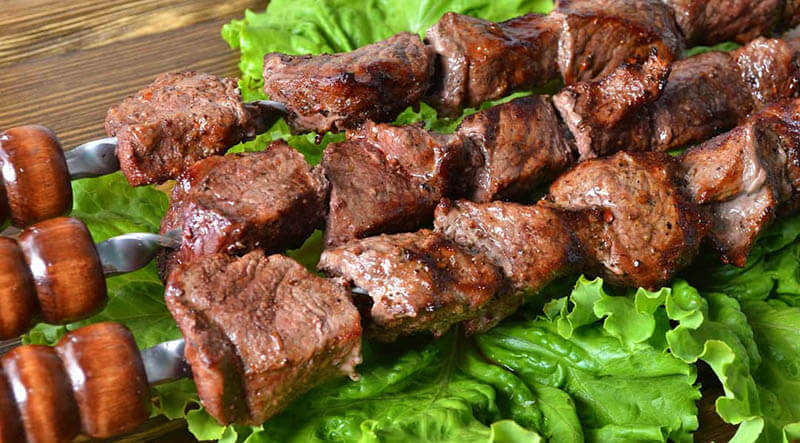 The purpose of marinating is simple: roasting should result in meat that is soft, juicy, and tasty. And here, in general, there is no need to think too hard: vinegar (or, better, sparkling water), lots of onions, pepper and salt are the classic marinade, in which the meat is kept overnight in the refrigerator. But if you want something new and unusual, these three recipes for marinade will not fail, and the kebab – from chicken, pork or beef – will pleasantly surprise your picnic guests.

This recipe was shared by Jamie Oliver: the “naked chef” is always in favor of simplicity, but not at the expense of the quality of ingredients. For the marinade – Oliver prepares chicken thighs, but you can use other parts of the bird – you need lemongrass (available at online stores and major markets), and the other ingredients can be found at the supermarket. Marinate pieces of chicken for at least two hours, but it is better to put the meat in the fridge overnight. Chef draws attention to frying. The coals in the charcoal grill should be in two states: hot and not so hot. Start roasting the chicken pieces on the less hot ones. Flip once and, when half cooked, move to the hotter side. Fry until a crust of light golden color, turn over – and fry the same on the other side. All in all – 5-7 minutes.

The amount of marinade – for four chicken thighs.

Chop cilantro and lemongrass leaves in a blender.

Add the garlic, ginger and lime zest and whisk everything in the blender.

Add the lime juice, chili peppers and sunflower oil and whisk to the consistency of the sauce.

Brush the marinade over the chicken pieces, pushing it under the skin.

Greek souvlaki is the same as kebab: cooked on skewers or on a grill of chicken, pork, or beef. The specifics are in the marinade, the taste of which is dominated by one of the most popular herbs in Greece: oregano. You can use dried. Smear the marinade evenly over small pieces of pork and send them overnight in the refrigerator.

This amount of marinade should be enough for 700 grams of pork tenderloin. If this seems insufficient, add a tablespoon each of lemon juice and olive oil. You can use both dried and fresh oregano, but you will need twice as much oregano in the latter case. Fresh oregano should be chopped very finely.

In a blender, lightly mix all the ingredients.

Leave it to marinate overnight.

Unlike the previous recipes, it takes time to prepare the marinade, mainly to cool it down after boiling. But it only takes five minutes to marinate the pieces of beef tenderloin, just before grilling.

In this marinade – its flavor is quite intense and its consistency is sticky – you need to keep the pieces of beef tenderloin (about 1.5 kg) for only five minutes, just before frying. The pieces should be medium sized. Cook over very hot coals until medium-rare. After which the meat again grease the marinade and lightly fry: so repeat one or two more times. As a side dish to such beef would be suitable vegetables or mushrooms, cooked on the grill.

Mix the garlic and the sesame oil with a little soy sauce.

Mix the remaining soy sauce with the sugar and bring to the boil.

Add all remaining ingredients to the hot mass.

Beat thoroughly with a blender.

Remove from heat and let cool

Let cool completely in the fridge