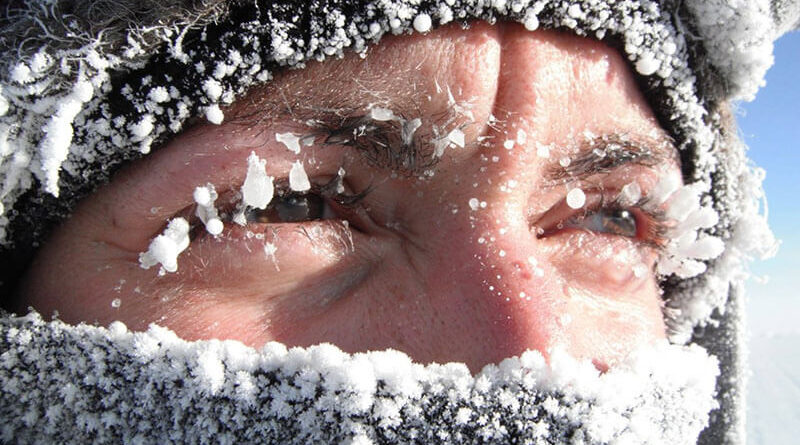 The frost is unpleasant when, shrinking, you leave home to go to work. And deadly if you find yourself alone with him for long hours. How to survive?

You go camping …… or will you just be forced to spend the whole day outside? So, know – to get frostbite, you don’t have to sit for a day in the winter forest. It is enough to chat with bare parts of the body at a temperature below –10 ° C for only a few minutes. And if the street has high humidity and strong winds, then a harmless zero can turn into a serious problem. So, if you are going to make an outing in the cold, warm yourself and do it right. Dress up in layers: a T-shirt, shirt and thin jacket under the jacket will keep warm longer than a thick woolen sweater on a naked body. Prefer gloves to mittens – together with your fingers it will be warmer than separately.

Shoes should be thick soled, waterproof, and in no case should you be reaped, otherwise it may disrupt the circulation of blood in the feet. Spend several hours in such shoes in severe frost – and the surgeons will leave your feet to themselves. And grab a tight scarf, even if you have a jacket with a throat. In which case you wrap your face and breathe through a scarf – you don’t have to carry your nose and lips in your pocket later.

Eat tightly shortly before the release, preferably fatty foods with a side dish rich in slow carbohydrates (cereals or legumes are suitable). By splitting food, your body will last longer in the self-heating season (and it breaks down cereals and legumes for about half a day). Going on a long trip, take a thermos with you with something hot. But just not hot – contrary to popular belief, alcohol is more likely to ruin you than support (and in the case of frost, this is really true).“In cold weather, the body retains heat by narrowing the peripheral vessels, which ensures blood flow to the internal organs and creates protection against general hypothermia. Alcohol, on the other hand, dilates blood vessels, destroying all of your body’s survival plans. In addition, it also reduces sensitivity – you will realize too late that you froze like a dog and do not have time to take the necessary measures. ” Finally, going to minus, smear a cream fatter (an ordinary child’s from a pharmacy is just that) – it will create a film on the skin that prevents overcooling.

2. You are stuck in a car on a deserted highway

“It happens that long-distance truck drivers stall on the road,” Yegor Bedrov recalls, “and they spend alone with a terrible cold from several hours to a day or more, depending on the route.”If you find yourself in a car in the middle of a howling ice cold, decide first and foremost – to go for help on foot or wait for it, staying in place. The closest people are far away and you have no idea how much? Well, try to wait for help. At least you can live with a car longer than blindly wandering in an unknown direction through a snowstorm. When the machine cools down, it is time to get out (inside the metal box it will not be warmer than outside) and make a fire.

If Santa Claus hasn’t prepared a bundle of firewood for your arrival, burn the tires: each of them burns for about an hour. A mound on the opposite side of the fire from the side of the car is a pile of snow – it will prevent a draft exploding into your makeshift shelter. When the tires run out, tear out and set fire to the car’s skin, but do it with caution – it can emit toxic substances when burning, and it is better not to breathe. Do not sit still – from time to time walk from side to side, move your fingers and toes, squat. But do not overdo it – every calorie stored in your body is now vitally important, there’s no need to expend energy without the need.

Do not smoke – cigarettes cause a spasm of peripheral vessels, which impairs blood microcirculation, and the risk of frostbite increases. Use any rags that you find in the car – tie them around the head, face and feet (you need to protect the heat in these parts of the body first). Wrap your face in a scarf or breathe hot air through your hands. Search your medicine cabinet: it’s good if you have an aspirin tablet — it dilutes the blood, making it easier to circulate; a warming or sports ointment will work on the same principle.

3. You got naked in the cold

Well, if, for example, you were thrown out of a car in a night forest in jeans and a shirt (to whom did you so much annoy?), Remember: movement is life. Run and do not stop, while your body generates heat, you remain conscious. You are now like a match: burn out – and you can be thrown away. Choose the right pace: it’s better to run slowly, but for a long time, than to fall face down in the snow after a ten-minute sprint. “A healthy 30-year-old man will remain conscious in a 15-degree frost for about an hour and a half,” Yegor Bedrov estimates. Overweight, health problems? Feel free to take half an hour. Do not waste time, run, run!

4. What to make a person melt

Let’s say, it’s not you who fell into the ice grip, but someone else – and now he needs help. Here he lies, blue and so cold that even in his whiskey luggage. Warm the poor fellow gradually. “Putting it in a heated bath or hot bath will only harm him,” Timur Sharvadze warns, “blood vessels will suffer from a sharp temperature drop.” For the same reason, the poor fellow is contraindicated in intensive rubbing and boiling tea for oral administration. “Wrap it in tight blankets, put it in a warm room, solder it with a warm, non-hot liquid,” Timur continues. And of course, show the unfortunate doctor as soon as possible.How not to get frostbiteDegree of frostbite

I degreeThe most harmless. You walk a hundred meters from the entrance to the car without gloves. Your hands turn pale, you feel tingling, burning, itching. Damaged tissue with proper care (hold it in warm water, then regularly smear with a fat cream) will completely recover after 5-7 days, and until then you will be like a fool walking in red “gloves”.

II degreeMore terrible. You went to the subway for a friend, she lingers, but you don’t put on a hat and gloves. It was like this for an hour, and now on the pale skin over the next days nasty bubbles with a clear liquid form. You feel the same as in the first degree, but more pronounced – and add aching pain. It would be nice for you to see a doctor. Sores will heal for two weeks.III degreeThis is already serious. You either got lost in the winter forest, or, celebrating your father’s anniversary, fell asleep in the refrigerator in the restaurant. Bubbles are no longer with transparent, but with a bloody liquid, their bottom is blue-purple in color. And it really hurts. You urgently need to see a doctor, but even he doesn’t always save – after 2-3 weeks, the rejection of damaged tissues may begin, and scars will remain in their place for life.IV degree

You are almost over. Cold struck soft tissues, in some cases even bones. There are no bubbles, but the affected areas are almost blue, sometimes with marble patterns. Swelling develops. Affected limbs are likely to be amputated, at best, deformed for life. A doctor, rather a doctor! It is a matter of life and death.

Run to surviveHere’s a chilling case described in Esquire Magazine No. 75 for March 2012:“I served in the Krasnoyarsk Territory, between Minusinsk and Abakan. <…> One fine day he was on duty on a company. The platoon on duty worked on the night shift, and they had to take food to them. <…> Frosts stood –35.Since I worked indoors and only occasionally went to the track, I was dressed in the so-called “glass” – summer hebe. On the feet are tarpaulin boots. <…> I sat in KrAZ and drove to the highway. At KrAZ, the third and fifth gears are located in parallel, it is easy to confuse. And I without driving experience – stuck in fifth gear and safely stalled immediately in the middle of the taiga. There is no battery. Everything was de-energized. The car began to cool. ” The soldier ran what he was to his unit, about 7 km. Fortunately, he ran, though barely alive.

“The guy made his first mistake by recklessly dropping in such a frost in a glass. And the fact that he ran did the right thing, what other options did he have? It’s worth it, however, to smear with engine oil – oily, it would work like a film, for some time covering the skin from low temperatures. “