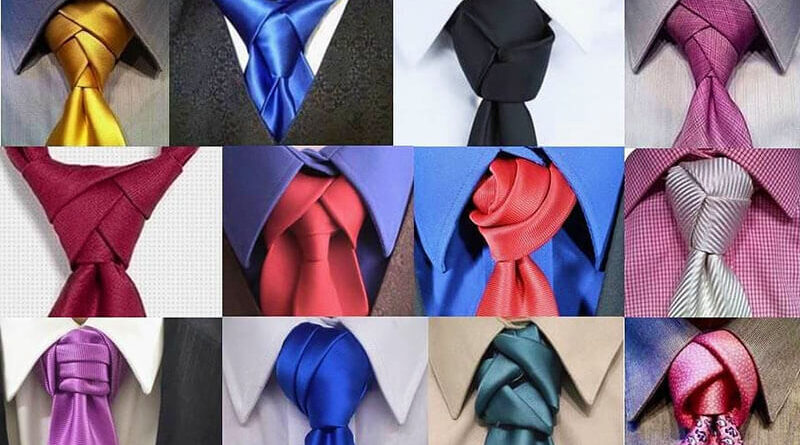 Even the most beautiful tie can be tied so badly that it will produce the wrong effect for which you expected. To avoid such unpleasant situations, you need to know how to choose the right tie knot. This is not such a difficult art, and now we will talk about the most common nodes and situations in which they will be appropriate.Blue men’s tieThe main rule for choosing a knot is to observe proportions. The type of shirt collar determines the type of knot: the smaller the distance between the corners of the collar, the narrower the knot should be. The material from which the tie is sewn also affects the choice of the knot: the denser and thicker the tie, the smaller and more accurate the knot should be.

1. One of the most versatile and popular nodes is, of course, the fourth node (four-in-hand). This is a great choice for ties of any material. Such an asymmetric knot is fastened and untied in one motion.Tie pattern, quarter knot

Both nodes can be used both in an official setting and in an informal one. Particular attention should be paid to men of large complexion: not enough material is spent on tying such knots, and the tie is quite long.3. However, knots are poorly suited for narrow soft ties: they become flat and inexpressive. To make the knot on such ties more voluminous and at the same time reduce the length of the tie, use the Victoria or Prince Albert knots.Tie-up scheme, knots Victoria or Prince Albert

4. Symmetric half-windsor knot – another versatile knot that looks good with ties made of any materials and with any type of collar. It is tied up more complicatedly, it is necessary to practice.Tie-up scheme, symmetrical half-vindzor knot

5. For official occasions, a large Windsor node is a good choice. It is named after the Duke of Windsor, who, however, did not wear this knot himself, preferring a quarter knot. The Windsor Knot harmoniously looks only on narrow tight ties made of silk and in combination with wide collars.Tie-up scheme, Windsor knot

Finally, we give one more tip. The knot will look more spectacular if, before tightening it, you squeeze the tie so that two longitudinal folds are formed to the left and right of the knot, and press your finger between them. Then tighten the knot without removing your finger. The result is a beautiful dimple.However, on thick woolen ties, you can refuse a dimple. This was the case, for example, Gianni Agnelli, a famous Italian entrepreneur with impeccable taste.