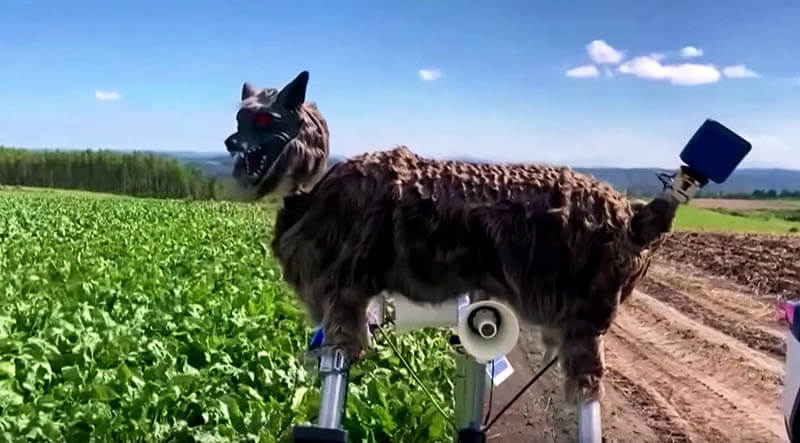 Monster robots are covered with artificial wool, their eyes glow and their head can rotate in different directions.

According to The Guardian, citing the local media, the inhabitants of the Japanese city of Takikawa declared a kind of war to the bears that came to visit people. Animals began to be scared away by frightening robotic installations in the form of monster wolves.

It is difficult to say whether the increased activity of bears in northern Japan is related to the decline in human activity due to the coronavirus pandemic. And there were no severe restrictions imposed in this country either. However, the fact remains that in 2020, the number of bear clashes in Hokkaido Prefecture was the highest in the past five years.

Most often bears go to human dwellings in late autumn, when before hibernation kolopalopym need to properly fatten up. Local authorities have decided to scare away the wild animals in a very original way. They ordered from the engineering company Ohta Seiko mechanized scarecrows in the form of wolves – natural enemies of bears.

The monster robots are covered with artificial wool, their eyes glow and their head can rotate in different directions. To scare bears, the scarecrow flashes light indicators and emits different sounds: from wolf howling and growling to simply synthesized noise. “Monsterwolves are activated by a motion sensor and can be mounted either on a high mast or directly on the ground. In the first case, it looks more creepy – the robot rises above the plantations like a ghost.

After the installation of robotic monsters, reports of people meeting bears have sharply declined. To be fair – here not only the bear will be afraid if he sees something like this in the field at night. Judging by the video from the cameras placed on the scarecrows, wild animals are sensibly rehearsed immediately after the “monster wolf” activation. However, it is possible that the bears will quickly understand the safety of such scarecrows.

In any case, the Japanese experience can be useful not only for the island state: according to scientists, the frequency of attacks on people by bears is steadily increasing in all countries where these animals are found. The expansion of human habitats, including recreational (e.g. country houses), increases the risk of encountering the wild animal.

Among all the major predators bears are the most dangerous for humans: every seventh of their attack ends in death. Nevertheless, these animals are very smart and try to avoid meeting people, especially if they behave noisily and do not move alone.