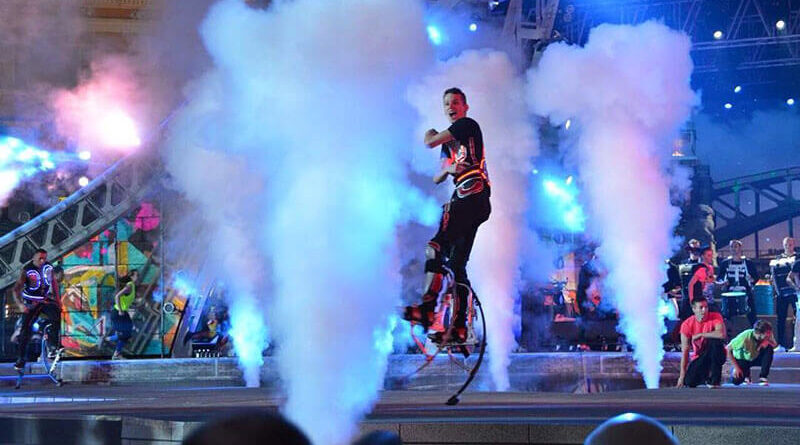 The name of extreme sports speaks for itself. Some people enjoy it aesthetically, while for others it is a great way to define the facet of human possibilities.

Each extreme sport carries a share of surprise when it is difficult to predict what will happen next. That’s what makes them particularly attractive. Let’s go through the list of the most popular extreme sports.

Climb into a huge multi-layered inflatable balloon and run through the mountains from the steep cliffs. It’s not fun for the faint of heart.

Scuba diving in shallow water among reefs can and is considered extreme only with a stretch. But diving, when you have only a small can of oxygen behind you, and under you – an unknown many kilometer’s world full of monsters – quiet.

Jumping on special stilts – jumper – is quite an extreme kind of outdoor activities. If you land incorrectly, you can get serious injuries, which has been proven many times in practice.

As part of this extreme sport, you need to climb the complex, steep rocks on a rope as fast as possible. And it is not as easy as it seems at first sight.

Climb into a light, inflatable sled and go down a slope with a challenging terrain as fast as possible.

Free fall from the rocks, where athletes maneuver between sharp peaks. It’s scary to watch, not to participate.

Compared to the past sport, this one is not so dangerous. Nevertheless, this sport has become practically an art. Athletes write out complex pirouettes, throw away and then catch up with their parachutes, and of course always risk their lives.

A giant inflatable cushion is installed on the water, a person lies on one side of it. At this time, a person jumps from the tower on the other end. The pressure throws the first extreme lover into the water, having previously lifted several meters in height.

One of the types of climbing, in which athletes conquer difficult, rocky slopes. Negative slopes, which some pass without insurance, make this sport dangerous and difficult.

Dreaming to feel like a shell? Then this sport is for you. In it, a man is launched by a huge catapult, he flies into water or on soft mats. They say this feeling of flying is unforgettable.

Imagine you’re between rocks, a few hundred meters high. Only a stretched rope separates you from the ground. This is slacklining. The task of athletes is to walk between the ropes on this rope. And yes, real extremists don’t use insurance to do that.

Something between acrobatics, water skiing and snowboarding. On a special board, athletes perform incredibly difficult tricks, while a fast boat races them at incredible speed on the water surface.

It’s both surfing and kite flying at the same time. Athletes ride on a special board, and control it with a small paraglider. They hold it in their hand and move with the wind streams.

Motorcyclists do deadly dangerous tricks on their bikes. They spin in the air, jump over cliffs and do everything to tickle their nerves.

The pogo sticks were originally intended for children only. But after adults began to do incredible things on them, jumping a few meters high, such an activity began to qualify as an extreme sport. And from year to year it is becoming more and more popular.

And how long can you hold your breath underwater? Freedivers rely only on their own bodies and do not take oxygen tanks with them. Not only does an athlete have to go as far down as possible, but he has to “keep the air” to float. In this extreme sport there is an incredible record – about 125 meters deep. Yes, yes, that’s how much a man without scuba diving could dive.

Running, overcoming obstacles, climbing tall buildings, jumping from an incredible height and continuing the run again, athletes in this category exactly deserve the title of extreme.

It’s almost the same parkour, but a little more selective and ordered. It’s a very traumatic activity that causes extreme stress on the human body.

A kind of sport in which a person plans on his own “wings”, catching the wind streams. For the start, you need an elevation with at least a small slope. The hang glider itself is non-motorized, so the athlete can only rely on luck and his own agility.

The brutal cold does not stop athletes who want to conquer ice caps, frozen waterfalls and other very unpleasant landscapes. They have the right equipment in their hands to help them get to the top. Here a person is exposed to almost all risk factors, because fragile ice can collapse at any moment, taking away bad people.

Diving under the ice may not be so terrible, but in order to get out, you need to navigate well in the underwater world. It’s a very extreme sport. Think about it, because if something goes wrong, people will not help you, even if they are only half a meter – over a thick edge of ice.

Athletes reach incredible speeds, moving on special icy tracks. One awkward movement and you can get seriously injured by flying off the route.

People go on a long journey to conquer dangerous mountain rivers on special boats. They are so violent that even the most experienced swimmers do not always manage to get out when they hit the water. Ice water stifles movements, and unexpected, large-scale rapids can deprive the gift of speech of an ordinary man. Oh, and waterfalls are everywhere. Yeah, it’s a bit extreme.

In Spain, it is a traditional entertainment where crowds of bulls come out into the streets. People run away from them, but not everyone succeeds, some get injured. Classes are not for the faint of heart, because in this race with angry animals it is easy to lose composure. You can’t stop here, otherwise a whole herd will run through you. Not only pair-footed, but bipedal participants in the action.

You can ride the board not only on snow or water, but also on sand. To try it, people find the highest dunes in deserts around the world and ride them like snowy mountain peaks.

Ski jumping is an Olympic sport that includes ramp jumping and a quiet landing on a hill. During the Olympics, “jumpers” are evaluated by the distance of the jump and the level of technology. It is a very extreme and dangerous sport, especially for beginners.

Treacherous slopes, especially on natural routes, are especially dangerous. In addition, avalanches are another danger in the mountains. Even on a small scale, the snow moving at enormous speed can bury alive anyone who gets in its way.

Reminds us of surfing, but we’ll have to move on a smaller board that has no fins.

At first glance, it looks like a rope walk, but not so extreme. Here athletes take small routes at an altitude of just a few meters or less. However, you have to do all 100 if you want to do at least some basic tricks.

Ice skating is a competitive form of skating in which people compete with each other over a certain distance. Routes are mainly designed for speed or endurance.

Paintball is a modern, rapidly developing direction. It requires strength, speed, agility and good physical shape from athletes. During a paintball game you will need tactical thinking to figure out and defeat all members of the opposing team.

It is a jet ski race, which is no less spectacular and extensive than the usual car or motorcycle racing. The reaction rate of the athletes is also important in these races.

In this sport, athletes descend from the mountains using special bicycles. They overcome multiple obstacles, sometimes at speed. This is a dangerous competition in which athletes can move off the trail at any time and fall off a few tens of meters high.

People climb to extreme heights to then jump into the water. If you fall at great speed, the water no longer feels like something soft and welcoming. It becomes like concrete. Athletes do not wear protective clothing, so it is very important to enter the water at the right angle.

Adrenaline levels are off the charts when you jump down into this abyss of uncertainty. You fly at the rate of free fall, but only until the rubber band pushes you up. I think that’s really scary.

Many of these sports prove that a man is almost unlimited in his abilities. In addition, it becomes obvious that inventive people have no time to get bored: it is through experimentation that these beautiful sports were born.