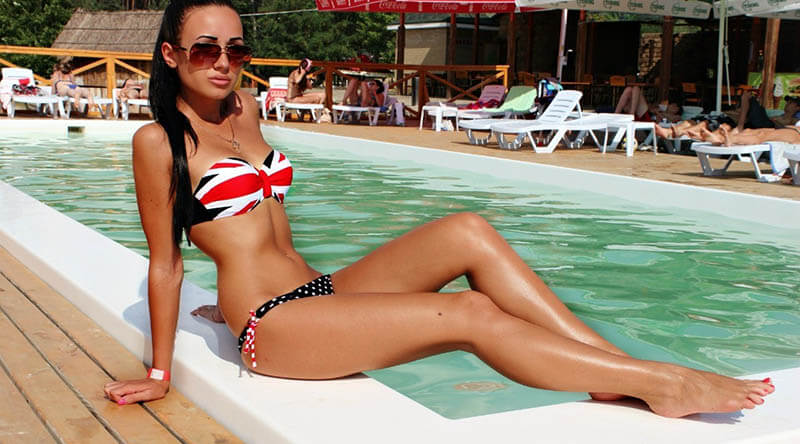 I’ll start with myself. When I told my husband what I was writing the article about, he laughed nervously. We have been together for 9 years, of which 4.5 years we lived in different countries. First our common Moscow, then my internship in England for 3.5 years, then his work in Germany… For the last year and a half we have been living together and almost never parted. Finally and hopefully forever. These have been hard years, but I am sure that they have helped two very young people (we met when we were 20) to keep their relationship, not to get separated, not to get torn apart by everyday life, which has separated dozens of our acquaintances couples. Focusing on yourself, your studies, jobs, and interests – was that hard? Yes. Were there moments of despair? Oh, yes! But it was a beautiful time in its own way, with sudden dates, unforeseen flights, letters, postcards and packages, small-town meetings and falling asleep in front of an open Skype window. It would have been a shame to condemn this relationship simply because circumstances were not in our favor and we could not live together.

Later, while in therapy, I realized that it was this experience that made my husband and I feel pretty early on that any relationship is a lot of work, not just a boundless feeling. A long-distance relationship cannot be left to chance. Every day both people have to put something into their connection: find time to communicate, the right words to support, adjust schedules and timetables. That’s why psychologists believe that a relationship that has passed the test of distance is more likely to survive any turmoil.

WHERE DO THE LEGS GROW FROM

Researchers from the U.S. Center for the Study of Long-Distance Relationships (yes, imagine that there is one!) blame the economy and the Internet for the emergence of a huge number of separated lovers. The conclusion is, in general, obvious: the increasing mobility of the labor force does not affect the quality of personal life in the best way, and makes a big contribution to the piggy bank of long-distance relationships. So do numerous dating sites: each year, tens of thousands of people around the world find each other on the Internet in spite of geography.

“Students who leave their first (or maybe second) great love for the sake of their studies and go to other cities and countries are also “at risk. The ease with which people move around the world and take on projects in different parts of the world has led to the phenomenon of remote marriage, or, as sociologists call it, distant families. At the moment in Russia such families make up about 6% of the total number of married couples, and their number is only growing every year. The difference between such marriages and “traditional” marriages is that the spouses do not live together (usually because of work), maintaining a tender romantic relationship and not intending to divorce.

A reasonable question is why some couples can’t stand being apart, while others can’t? Is it possible to predict which couple will cope with the distance and which will fall apart? According to psychologists Lee and Carole Pistol of American Purdue University, it is quite possible. The fact is that our relationships with others are most influenced by the model of attachment that we formed in childhood, interacting with parents and family members.

People with so called secure attachment style are confident in themselves, they do not need confirmation of their own attractiveness and value from other people, and they are able to keep a balance between independence and closeness in relationships. Such people (I would even say, superhumans) are not afraid of loneliness, they are comfortable alone with themselves, and therefore their attitude to their partner is constant, regardless of whether he is near or thousands of kilometers away.

If a person is characterized by an anxious or avoidant type of attachment, it is terribly hard to be away from loved ones. Without the constant approval and affirmation of love, such people wither and begin to go crazy. When a loved one away, “anxious” types go head first into self-criticism, and then start to look for flaws in the partner and the relationship as a whole. They are most sensitive to the difficulties that inevitably appear in a long-distance relationship, and the absence of a loved one for them is equivalent to loss of self.

Conducting a study among 600 people who had experience in a long-distance relationship, psychologists calculated that those couples where at least one partner has a secure attachment hold the strikes. But what should you do if you’re both not yet wise and experienced enough to have any anxiety or doubt at all? First of all, realize that from the moment you say goodbye at the airport and the plane with its silver wing leaves the earth only a shadow, you can no longer control anything. It is generally a bad habit, for that matter, and in a normal, traditional relationship. But at a distance it is like death. Any attempt to control intensifies anxiety, excites unhealthy fantasies, covers with a veil of doubts and fears. And in the end you have less and less power, time and attention to love – the only thing that helps to survive the separation.

Your task is to build a strong connection, and any doubt creates micro-fractures. How to avoid it? Be here and now, not in thoughts and dreams. Call each other, text each other during the day (thanks Viber, WhatsApp and iMessage allow you to do this for free), share everything that happens to you – and chronicle events, and feelings. Also, gossip! Third-person discussion, as unethical as it sounds, is very bonding. Calm your conscience: you’re not hatching a vicious plan, but only sharpening tongues. Psychological fact: sharing the latest gossip makes the relationship stronger. It’s as if you are telling each other, “We are not like them,” and it acts as a soothing effect on the souls wounded by separation.

At first you may feel that you’ve sacrificed yourself – to his studies or career. Or, on the contrary: that the victim – the man you love, if you had to leave. Both are not constructive and adds extra pathos in the daily conversation. You feel like a martyr or, conversely, struggling with guilt and, as a consequence, start talking only about the sublime. Give up this pathos business. Share your feelings, cute little things, witty observations and sexual selfies – all of which is the best way to keep the fire of love and passion alive.

You know what advice (after the standard “call me several times a day” advice) is most often given to newcomers by experienced “remotes”? Leave things at each other’s place to remind your loved ones of you. Preferably, these things should smell like you, your favorite scent. This little trick is not just a tribute to sweet domestic tenderness. It’s a behavior your body will approve of. Scent plays a crucial role in shaping intimacy – not just sexually (eh, what a pity that scent still can’t be transmitted over Skype…!), but emotionally as well. When you meet after a long separation, you realize that in front of you is a loved one, a meeting with whom you have been waiting for. But the body falls into a stupor and flatly refuses to recognize the traveler: everything in it seems unfamiliar and alien. As a result, instead of the expected hot sex you internally cringe at every touch.

That is why psychologists recommend a good “sniff” to help the forgetful body to recognize your favorite. The longer you have not seen each other, the greater the chances that “sclerosis” has gone too far. It’s better to see each other every month on a weekend than to spend two weeks together once every six months. Breaks longer than a month and a half make the “disease” progress rapidly.

TV producer Lesa is 29 years old, lives in Italy, and her husband has been working in San Francisco for a year. “I am terribly depressed by the lack of daily routine,” says her friend, “some boring regularity, scattered socks and uncovered toothpaste in the bathroom (I never would have thought I would miss it all so much!). When I get sick, there’s no one to call the doctor or make soup. Or when my loved one is having a hard day and I can’t hug him. But I can see how we are different for the better than couples who spend all their time together. My husband and I spend hours talking on Skype, sharing all of our experiences with each other, and fighting less. Honestly, sometimes I think the distance has made us feel more close.”

Lesya’s seemingly absurd statement is confirmed by scientists at Cornell University. This year they conducted a study and concluded that feelings of deep affection and long-distance relationship go hand in hand. The fact is that long-distance couples are more appreciative of every minute of live communication and are more willing to engage each other in the smallest aspects of daily life, which is often neglected by those who live under the same roof.

A long-distance relationship must come to an end sooner or later. Perhaps this is the main rule for those who have been separated by circumstances. Everything that causes unpleasant emotions (no matter what heroes of distant novels say, no matter how brave they are, but sadness, melancholy and sadness are the true companions of a long-distance relationship) must end, and the end of a long-distance relationship must be clearly marked. A year, two, three, even ten – the main thing is a certain date that you both focus on. With a clear goal ahead, it’s much easier to calculate strength. And there is something to answer to curious friends and relatives. It’s a well-known psychological trick: when people realize that they have to endure the pain for exactly five minutes, it doesn’t hurt as much.

Fix a deadline and don’t forget about it. Make plans, don’t gloss over resentments, and remember that there are no guarantees. Long-distance relationships may or may not work out. But it’s definitely worth giving them a chance.

Psychologists believe that educated people have a better chance of keeping love at a distance. The higher the IQ, the stronger the person tends to reason and analyze and is less likely to succumb to emotions. This allows educated people to see perspective in a “distant” relationship.

THE SEASON IS WAVING

Traditionally, the number of long-distance romances increases after the summer vacations. Holiday romances grow into something more, but, alas, by November their number drops by at least a quarter.

It’s impossible to be in a long-distance relationship and be a prude. From now on, sexy photo shoots and Skype sex are your routine. Look for advantageous angles and put a good nightlight in the bedroom – competent light ensures a beautiful picture.