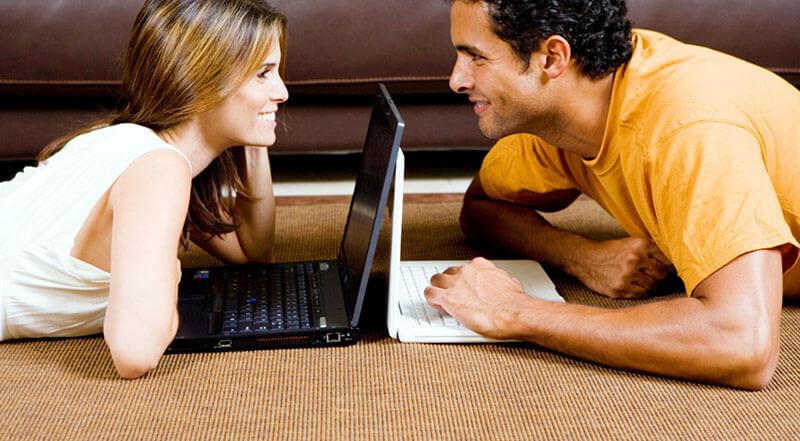 Every year people spend more and more time on the Internet, which has evolved from entertainment into a vital necessity. Here you can earn and spend money, watch movies and read books, make virtual excursions to other countries and … get acquainted. According to statistics, one in three people on our planet of marriageable age sits on a dating site or uses mobile applications that allow you to communicate with people, taking into account geolocation: it is still more pleasant to find a friend or loved one who lives or works in walking distance.

The Internet has also simplified the procedure of dating. If before it was possible to get acquainted only at a guest, at work, at a party or in a club of interests, now it is enough to lay out the questionnaire on the next dating–site or to join a group of acquaintances in a social network, having taken care of good photos. It is interesting that many dating on the web ends with a wedding, but there are also people who are disappointed in this way of communication. What is it – love online?

The main advantage of dating on the Internet is its ease of use. If a stranger comes up to you on the street and asks you your name, it can be alarming, frightening and repulsive, especially if the appearance of a stranger is far from perfect. On a dating site, on the contrary, you can instantly start correspondence – this is why you came here. It is easy to joke, flirt, ask questions and answer them.

This is a real salvation for shy and complex people who are afraid to talk to a passerby in the subway or a neighbor to the dacha. In virtual correspondence, you always feel more comfortable and freer, because you do not need to think about the lack of appearance or feel uncomfortable when there are pauses. You do not care that the nose jumped a pimple, a button on your jacket came off, and the last time you did a manicure a year ago. In addition, you always have time to think before answering the question, which means you are less exposed to emotions and do not write too much. By the way, if you do not like the dialogue for some reason, you can send the interlocutor to ignore without further explanation.

What else is the advantage of online dating? At the beginning of virtual communication each person has a chance to make the most enjoyable impression, because they are evaluated by the clothes only in real life. On dating site, of course, your photos are posted, but the main emphasis is on correspondence, so you have a chance to sparkle with intelligence, demonstrate good outlook and the best qualities of character. Many people immediately want to go to Skype or offer to meet immediately, thus depriving themselves of the opportunity to get to know each other better. However, eager for a relationship for one night do not bother to correspond, for them the main thing is the external data partner. Another plus is that before the first date you can make an impression of a person, getting rid of disappointments at the meeting and not wasting time on hopeless communication.

Or you can get acquainted at all without a photo, and then create a family with three children – this happened to the Muscovites Sergei and Ekaterina Glaznov. Once Katya was bored at work, she typed in the ICQ search name Sergei and wrote to the first person from a long list of users of the same name. A week later they met and soon realized that it was fate… Yes, and it happens!

What else are good dating sites? You can chat with several people of the opposite sex at once, and no one will accuse you of immorality. At the end of the day, you’re on the lookout and you don’t owe anyone anything. And to facilitate this process, developers of mobile applications for the dating-industry create many tools to choose a partner according to their interests and life values. In the West, there are applications for dating animal lovers, travelers, fans of a certain direction in the arts, followers of different religions, gourmets, full or tall people, but among them there are also very strange communities, such as Gluten-Free Singles – dating for those who follow a gluten-free diet, or bacon community.

Even on a regular website, you can customize filters so that your profile is only seen by people with similar interests. We are doing everything possible and impossible to finally find the only person for life. But why the total problem of loneliness that mankind faced at the end of XX – beginning of XXI century remained unsolved? According to sociologists, about 40% of people either never got married or had a divorce and did not build new relationships. What is the reason?

What is the danger of getting to know each other on the Internet?

It turns out that not everyone who registers on a dating site or downloads a mobile application to find a partner wants to find love and start a family. Why else would people get to know each other online? Alas, a lot of people are looking for a relationship for one night or several nights, for a month at the most. They flutter like moths from one partner to another, and they quite like this life, and it is not necessarily men, some women are also supporters of free “love” without obligation. Many people come to dating sites to assert themselves, to raise self-esteem, to heal wounds after parting or to overcome complexes at the expense of another person, which is also the use and exploitation, but on the emotional level. It happens that people get to know each other in order to move to another country, find a sponsor or solve some other material problems.

There are also scammers on such Internet sites – marriage scammers, thieves and albums, which make up about 10% of the male contingent. There is a high probability to come across a maniac, a mentally unhealthy man or a married man who is looking for entertainment on the side, because no one prevents him from setting the status of “not married” and the purpose of acquaintance “family creation. And women can also be cheaters, so caution will not hurt anyone!

All life is the theater

Internet dating provides an excellent opportunity to try on different roles and wear a mask until the inevitable development with disclosure. Alas, not always people answer the questions of the questionnaire truthfully, many carefully process photos in Photoshop, sometimes attribute a few centimeters of height, lose 5-10 kg weight, exaggerate their dignity, invent education and profession. In this case, sometimes it is possible to deceive a partner for a very long time – who as luck would have it. Anna from St. Petersburg met on a site dating a very decent man, who, like her, was looking for a serious relationship. They spent time together, went on vacation, he came to visit her and invited her to his bachelor rented apartment. When the girl got pregnant and raised the question of marriage, it turned out that the gentleman has long been married and divorce is not part of his plans. The saddest thing is that after parting with Anna, this man remained on a dating site and does not plan to change his lifestyle.

Speaking of pictures. Professional Photoshop, not corresponding to reality, can lead to shock on the first date, but it can happen and vice versa. Many people are non-photogenic and look much better in life, so when you refuse a date because a person seemed unsympathetic, you make a mistake. It is quite possible that you will completely change your mind the first time you meet. In general, do not jump to conclusions!

How do you protect yourself from disappointment

Psychologist Luciya Suleymanova advises to post the most natural, unprocessed photos on the dating site, not to belittle your age and not to exaggerate your dignity and material wealth, as for the most part men.

“This is how you avoid disappointment,” says Lucius. – The best way to avoid disappointment is to be, not to seem. Always be yourself, don’t pretend and set your priorities clearly. Fill out the form as truthfully as possible, specify the true purpose of your registration on the site, and then unnecessary applicants will be eliminated the first time you look through the information about you. However, there is a category of people who in principle do not read the questionnaire, and immediately write, because they are looking for easy meetings for one night, such you already have to sift out on their own. Pay attention to the questionnaires of those who have written to you, if the information about the person is too scarce, and the photo is missing or it is offered to send to the mailbox: there is a reason to think, and do you need, in general, such a friend?

Also, you should be worried about photos that are too frank, strange impatience and lack of desire to correspond, such people immediately talk about meetings and closer communication. This is a sure sign that the potential partner is not interested in your inner world at all, as he has very different goals. And of course, follow general safety rules – do not get in the car to a stranger, do not go to his house and do not invite him to your home, do not tell anyone your home address and passport details, and make appointments only in crowded places. Alas, dating sites often meet inadequate individuals, and it is better to protect yourself in advance.

Another disadvantage of dating on the Internet – too much choice. Yes, the advantage can easily turn into a disadvantage. The fact that the simplification of communication devalues communication, because you can now find your soul mate through a smartphone in the subway or in line to see a doctor. It didn’t work out with Petya – let’s try with you, and if Nastia can’t come on a date today, you can invite Masha. From a huge “range” of proposals dizzy, and you feel in a huge supermarket with beautiful packaging, while wanting to try everything! Various innovations in the dating industry have not taught people to really communicate and get to know each other, although, of course, there are many nice exceptions, because in fact many people are looking for dating on the Internet for a serious relationship and they are doing it. I want there to be as many cases as possible…

On dating portals often glimpses some “American generals” who put up photos in epaulets, say compliments, actively get acquainted with women, write touching words of love and tenderness. After a while, when the victim falls in love, “promotion for money” begins. The “generals” very pitifully talk about the need for an expensive operation or invent other ways to get from gullible women help, vowing to assure that everything will be returned, and disappear. Such people are called scanners, and extortion is their profession, sometimes as a part-time job, especially when it comes to students. Sometimes they even manage to catch these scammers, as it happened a few years ago, when three guys promoted a rich foreigner for 20 thousand euros, creating an account on a foreign dating site with a picture of Anastasia Volochkova. Do not be too gullible!