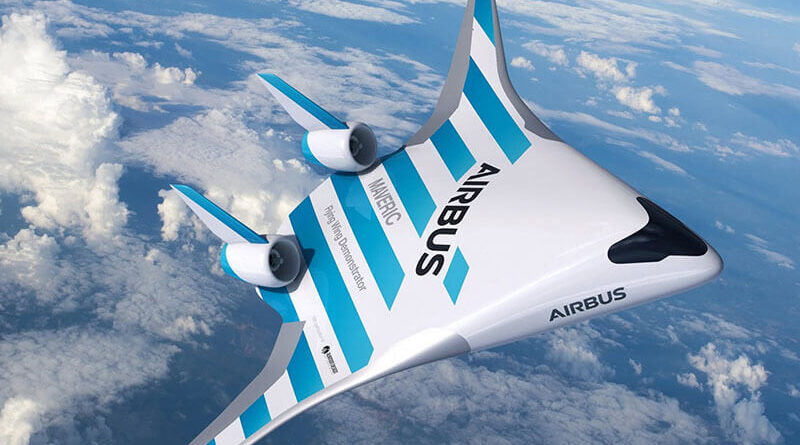 At this year’s Singapore Airshow, the famous aerospace company Airbus demonstrated in action a large-scale model of next-generation airliner created by the BWB (Blended Wing Body) aerodynamic scheme. This model, called MAVERIC (Model Aircraft for Validation and Experimentation of Robust Innovative Controls), is designed to study and demonstrate the benefits of aircraft whose fuselage is integrated with their wings.

The idea of the BWB aerodynamic scheme was born in the 1920s, and over the previous century a number of attempts have been made to implement it fully or partially. This scheme is an intermediate variant between conventional aircraft and aircraft type “flying wing”. In the former case, the wings and fuselage are separate elements of the aircraft’s structure; in the latter case, the aircraft has no fuselage at all and turns into one big wing. In the mixed BWB version, the wings and fuselage are present, but they flow smoothly into each other without any clear separation boundaries.

The reason why the BWB scheme attracts the attention of aeronautical engineers is because of several major advantages. The fusion of the wings and fuselage into a single design allows for a larger effective area, which requires less traction to create lift force, affecting the flight efficiency upward. In addition, in the combined version, the aircraft has additional space to accommodate cargo and passengers, which will allow for the creation of smaller aircraft dimensions.

The Airbus MAVERIC prototype is 2 meters long and 3.2 meters wide with an effective wing area of 2.25 square meters. It is powered by two miniature turbojet engines installed in the area of vertical stabilizers. The prototype model, like the future full-size prototype, is equipped with remote control.

It should be noted that the MAVERIC aircraft first took off in mid-2019 and this year it will continue its flight test program. The information collected so far shows that the use of the BWB aerodynamic scheme allows achieving 20% fuel savings, and in the case of full-size aircraft, this figure may even increase.

One of the disadvantages of this type of aircraft in passenger design is that the cabin is located deep inside the aircraft and there are no windows or windows at all. This problem has already been solved as part of the Airbus concept project, and information panels of the appropriate shape will be installed on the walls of the passenger cabin, which, in addition to displaying entertainment and information content, will be able to turn into virtual windows to the outside world.