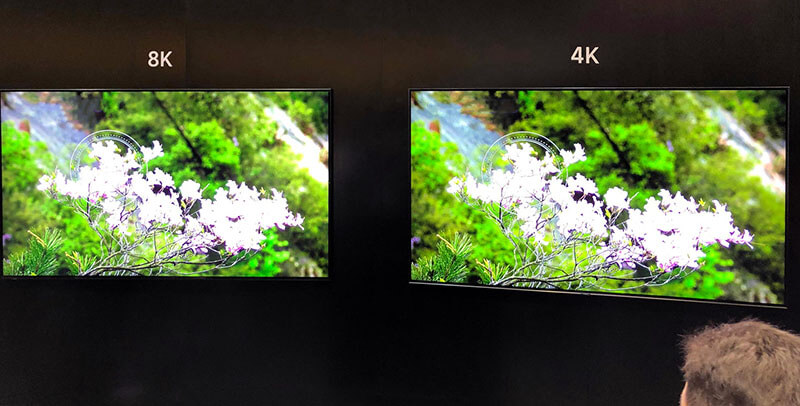 Pixar, Amazon Prime Video, LG, the American Society of Cinematographers and Warner Bros. conducted a study to determine whether people see the difference between 4K and 8K TVs when watching a variety of video content. In the study, 4K and 8K TVs were defined as devices with screen resolutions of 3840*2160 and 7680*4320 pixels, respectively.

For the experiment 8 video clips in 8K resolution were prepared: two “Dunkerk” clips from Warner Bros.., digitized from 70mm film, one of which showed the close-up of the character and the second – the general beach plan; animated clips from Pixar, Brave and A Bug’s Life, originally “drawn” in 8K; two clips from the series The Tick produced by Amazon, shot on a digital camera RED, as well as the video Nature provided by Stacy Spears. All the clips were shot using an HDR10 profile.

What is this done for? So that the information about the TV’s transition to the 4K mode will not be displayed during the playback.

The LG 88Z9 88-inch 8K OLED TV was used as the screen. The playback source used was a Windows PC equipped with an 18-core Intel Core i9 processor, a RAID array of SSD drives and a Nvidia GeForce 1080Ti graphics card. The BlackMagic 8K Pro video interface sent video over four 12G SDI channels to four AJA Hi5-12G SDI-HDMI converters providing HDMI 2.0 output. Four converters sent the HDMI 2.0 signal to Astrodesign SD-7075, which converted it to a single HDMI 2.1 stream, which in turn was output on the TV. The compressed files were played in the professional DPX format at 24 frames per second. They were encoded with 10-bit precision in the BT.2100, which uses the BT.2020 colour scheme and PQ EOTF (electro-optical transfer function); this is the standard for HDR10. Playback of such files requires a constant read rate of at least 3 GB per second!

In each session, the 4K and 8K versions of each clip were played in three sequences. In two sequences, the 4K and 8K versions were arbitrarily labeled with “A” and “B” and played back twice in turn, i.e. ABAB, after which participants indicated in the evaluation form which one looked better. In the third sequence, the 4K version was reproduced four times, although participants still saw the alternating labels “A” and “B”.

Each participant’s visual acuity was checked before the study began. Most participants (61%) had excellent eyesight. The remaining 39 per cent had only slightly worse vision. Most of the 8K rollers were rated “very slightly better”. In the groups of participants with a higher visual acuity than average, the higher clarity of 8K videos was noticed by a slightly higher number of respondents. Researchers paid the most attention to the results of this group, as people with the highest visual acuity theoretically had to unmistakably distinguish 4K video from 8K. It is noteworthy that the higher detail of the video Nature from Stacy Spears determined the majority of participants in the study. This can be explained by the fact that the Nature footage contains a lot of very small details, which is exactly what the increased detail is visible. The researchers concluded that increasing the resolution to 8K at 88 inches does not give a visible improvement in image quality. Using an LCD screen instead of an OLED sensor in the study would also have little effect on the results.

An 8K image is very slightly superior to a 4K image, and this is only noticeable from a short distance to people with very sharp eyesight. In real-life conditions, the average viewer is likely to simply not notice the difference.