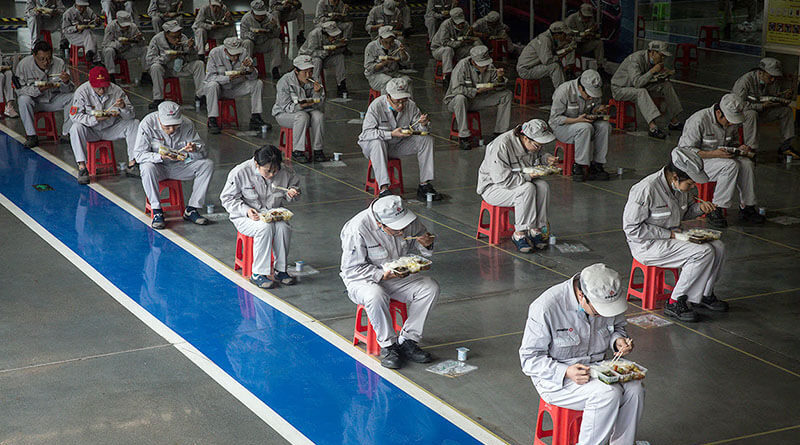 After defeating the coronavirus, the relationship between the state and business will strengthen, and the states themselves will become more centralizedIt seems that the spread of the disease in the world has not yet reached the top of the graphs. Even in China, the danger of a second wave of infection remains. The most significant battlefields are the United States, Europe and India. Unfortunately, the bill can go to tens of millions of infected and hundreds of thousands of dead. The impact of the pandemic has spread far beyond the borders of medicine; it has affected the foundations of a familiar lifestyle around the world.

After the end of the Cold War, the world no longer shared ideological doctrines, but the world did not become one. We see a division according to the type of government into centralized and decentralized states. Centralized systems, of which China is an example, are easier to deal with unexpected large-scale crises than decentralized systems.On the example of the USA, we see that the advantages of decentralization are manifested in periods of economic development, when in many decision centers there is a search for technological and organizational innovations, from which the most effective are selected based on competition. In the period of an extraordinary crisis, when several “black swans” flocked at once, the ability of the state to mobilize large-scale financial, technological and human resources as soon as possible becomes the most important success factor – and this is the advantage of centralized systems.

Now we are witnessing the beginning of a confrontation between these approaches, a more serious confrontation than last year’s forgotten trade war between the US and China.The United States will have to choose how much the threat of loss of human life and economic potential can move the social system, historically formed as decentralized, to centralization. This shift will occur regardless of the will of individual groups or politicians. Measures to restrict movement, control of the population with the help of gadgets, the introduction of a face recognition system and a partial rejection of the principles of privacy and information about it are what will have to be given up and adopted from a competitor, China, in order to survive.Russia has its own tradition of interaction between the state, population and business, and it is closer to the centralized model. The reaction of the Russian state to the spreading epidemic was quick and quite adequate. As with any major crisis, many things are sorely lacking, but over time, a centralized system will find a way out.

Business after the pandemic

Life will never be the same as before the coronavirus, many realities will change around the world. There are five major changes.Instead of the tasks of economic development, through achieving maximum efficiency in international commodity exchange, protectionism and localization of production chains with maximum added value in the national territory will come first. The strength of the supply chain becomes more important than the effectiveness of its parts.Real digitalization will quickly happen – everything that can be converted into digital and done remotely will be translated in the near future. Paper contracts and meetings for thirty people with a personal presence are already a thing of the past.At the corporate level, there will be a return to the fundamental rules of doing business: a business should be profitable, a credited business is vulnerable and unreliable in the long run, liquidity reserves are more important than the desire to optimize everything. The era when startups boasted about their cash burning rate is a thing of the past. Cash is the king, like a hundred years ago.

The corporate structures themselves will change – many tasks can be performed by the joint efforts of workers working remotely on corporate networks. There will be no offices with open space for hundreds of people, and the corporate structure itself will become more “flat”. Several management levels will disappear. The success of the company will be determined by the ability of its management to quickly develop and implement solutions.The connection of business with the state will be strengthened. Large investment projects will cease to be a private affair of a company. The state, as a regulator that defines the rules, and as a party that expects the public good from business in the form of employment, taxes, environmental protection and social development of the territory, will be involved in the design and business planning process (since it will all go digital) from the very beginning project. In response, business can count on government support in extreme circumstances.

What to do now

This is how the world will look after for those who survive. And what can be done to support business and employment today?

For large businesses, the main challenge today is the sustainability of production and financial chains. Therefore, it is necessary for the state to assume some of the risks associated with financing large enterprises. For this, approval of limits for issuing state guarantees to systemically important enterprises is suitable. This can be done by the government on the basis of uniform industry rules prepared by ministries. The Treasury should maintain a unified register of state guarantees, which should be provided for a period of three years free of charge. Under these guarantees, commercial banks will be able to continue lending to enterprises, many of which will violate capital adequacy standards.What will happen if part of the enterprises cannot pay off loans secured by state guarantees in three years? These enterprises can be nationalized and put up for privatization to return state funds.For SMEs, the main problem is the ability to pay staff salaries and rent payments in conditions when revenue has decreased several times. It seems appropriate that social payments for SMEs be completely zeroed for the next two to three years. If the staff is reduced, no one will pay insurance premiums anyway.

An overwhelming burden for business during the crisis was the property tax, which has increased many times over the past three years due to an increase in the cadastral value of property. This is an important tax for the regions, but it is essentially anti-modernization. For example, you have built a new enterprise and pay property tax at a rate of 2.2%, that is, you give as a tax a quarter of the cost of the plant for ten years of its payback (if any). Your competitor “finishes” the old already depreciated equipment and does not pay tax at all. Unfortunately, today this is a tax on those who nevertheless decided to build new factories, offices and shopping centers.How can one compensate for the shortfall in regional budget revenues when abolishing property tax? Income tax may be increased, say from 20 to 22%, so that the increase goes to the regional budget. Income tax – honest tax. You can share when you have something to share. Regions and companies will be interested in the same thing – increasing the profitability of the business.This severe crisis gives us the opportunity now to complete the system of interaction “state – population – business”, making it more modern and focused on development. Coronavirus will pass – mutual understanding will remain.