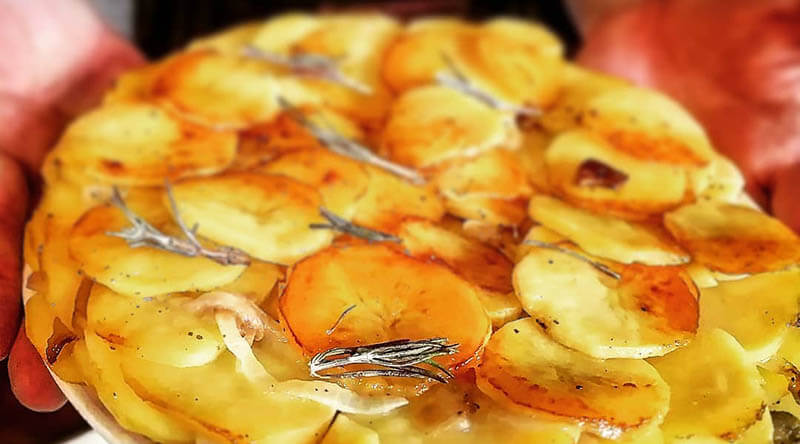 We all loved potatoes as children. For adults, however, it is almost indecent: potatoes are declared the enemy of health and a slim figure. Is it true or is it slander?

We all loved potatoes as children. For adults, however, it is almost indecent: potatoes are declared the enemy of health and a slim figure. Is this true or is it slander?

Michel Montignac, the creator of the famous diet based on the glycemic index (GI) of foods. According to his theory, all foods with a high index (70 or more) lead to rapid weight gain. The index for boiled potatoes is 70, for mashed potatoes it is 90, and for baked potatoes as high as 95. Hence the conclusion – eliminate potatoes from your diet immediately!

Robert Atkins, who has developed a no less popular diet, the low-carbohydrate diet. According to Atkins, potatoes automatically become a non-grata product on the table of every person concerned about the problem of excess weight.

William Bunting, the famous Canadian professor and insulin researcher. A lifelong researcher for the cure for diabetes, he held potatoes and pasta responsible for the obesity epidemic that threatens the world.

Proponents of separate eating are more tolerant: they leave the tubers the right to exist, but require that they be isolated from any protein foods, both animal and plant.

Followers of low-calorie diets do not call for the immediate elimination of potato fields and claim to merely control the caloric content of their meals. But in the menu of the most stringent of them you will not find the ill-fated root vegetable.

Who would dare oppose such an authoritative team? Relax, there are some!

Gastroenterologists say that because of the high starch content, potatoes become an invaluable product for stomach diseases (ulcers, gastritis) and predisposition to them. The starch irritates only militant nutritionists and fanatical thinners, while on the contrary, it calms the walls of the stomach.

Experts in the field of cardiovascular and renal diseases are also strongly against excluding potatoes from the menu. It is full of potassium, which improves metabolic processes and normalizes the water-salt balance. Moreover, potatoes have an anti-edema effect, and where there are no edemas, the scales show smaller figures.

The conquerors of the North and the gold diggers of Alaska are not the most modern advocates, but nevertheless their opinion is also valuable. It was our root vegetable, rich in vitamin C, that saved the adventurers from the terrible disease, scurvy.

Lovers of some fashionable diets, too, oddly enough, on the side of the accused. The fact is that there are not only potato unloading days, but also entire potato diets. The meaning of them is a topic of a separate conversation, but, nevertheless, they exist.

And in fact it’s necessary to know that it’s not potatoes that cause damage to the figure, but the oil and fatty sauce with which they tend to pour it.

…chips. Essentially, they are pressed starch soaked in oil, thickly salted and peppered, often with artificial flavors and flavorings. There are no vitamins, minerals in a form that is better not to consume. In addition, chips cause thirst and subsequent retention of fluid in the body, which immediately affects the weight. The caloric value of 100 grams is 500-550 kcal.

…French fries. Vitamin C and minerals are preserved in it, but still this dish is extremely not recommended to those who care about a healthy stomach and a thin waistline. The caloric value is not less than 400 kcal per 100 grams of product.

A safe combination with fats potatoes can be provided only at home, preparing the right dishes from the right products.

For those who lose weight it is better to season it with vegetable oil instead of butter, or low-fat sour cream, or stew, for example, with fish, a carrier of valuable polyunsaturated fatty acids.

The average potato is:

Vitamin C in fresh potatoes is only 2 times less than in citrus – 20 mg per 100 grams. The vegetable is also rich in B vitamins, beta-carotene, vitamin E as well as biotin and folic acid. Fresh tubers have a lot of magnesium, which is extremely useful for the nervous system.

“So maybe it’s better to do without it?” – doubters think. After all, Atkins and Montignac, and pots are not allowed, and in general, lived in Russia without it, until Peter I went to Europe…

Whether to justify potatoes or not is up to everybody, as is the choice to eat them or not. But to argue that you should not give up tubers because you lose weight, should not. Potatoes do not hinder weight loss, on the contrary – an enabler. After all, the boiled root vegetable has a pleasant feature – quickly and for a long time gives a feeling of fullness, and thus helps to avoid overeating.