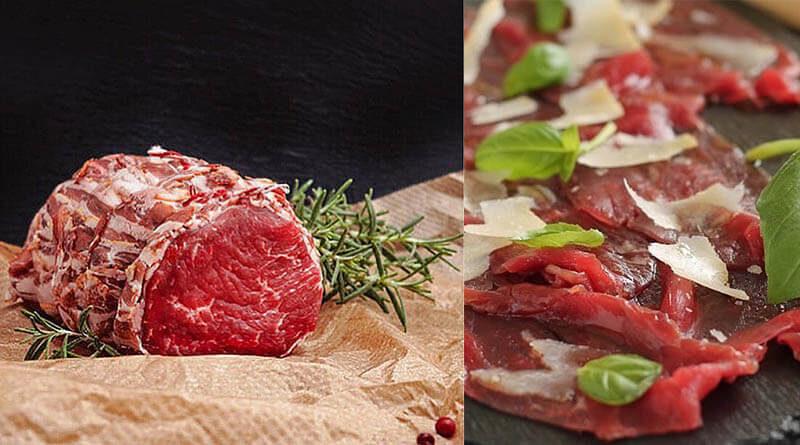 Many restaurants have carpaccio, tartar and other dishes from raw meat in their menu. But is it all safe? We tell you.

Meat refers to products that require heat treatment. On the surface of raw meat can live parasites and bacteria, such as Escherichia coli, salmonella, listeria and others. At high temperatures, they die. But if the meat is not treated properly, there is a risk of catching an E. coli infection. How hard the disease will be, depends on the source of infection, and also on the age and health of the diseased. The risk group includes the elderly, pregnant women, small children and people with chronic diseases – it is they who have the symptoms of infection and complications may be the most acute.

The most dangerous type of meat is minced meat. It is often made by adding the meat of several animals. Therefore, the risk of infection increases. Some doctors believe that for the same reason, raw fish is less dangerous: unlike meat, it is usually not chopped or mixed with other fish. However, raw fish and seafood are also a source of dangerous bacteria and parasites. In addition, it may contain mercury, which has toxic effects on the nervous, digestive and immune systems.

Doctors do not agree on the optimal temperature to which to heat the meat during cooking. Americans advise to bring the temperature of beef, veal and lamb to 62.8 ° C and maintain it for at least three minutes. Minced meat should be brought up to 71.1 °C, and poultry – to 73.9 °C. The British offer to cook all food until it is heated to 70 °C. The recommendations of the World Health Organization also agree to 70 °C. There is no need to focus on the color of meat: the meat may have a pink color, but be ready to eat. You can monitor the temperature with a special kitchen thermometer.

But freezing will not free the meat from bacteria, as many believe. In the freezer, the bacteria will stop multiplying, but after defrosting it will resume its activity. Washing meat won’t help either, so you’ll only spread the bacteria in the kitchen, not get rid of them.

Eating raw meat in restaurants is theoretically not dangerous, because according to San Pin, it should be checked and have a veterinary certificate. But to ensure the safety of meat, you need to fry, bake, boil or otherwise heat it.