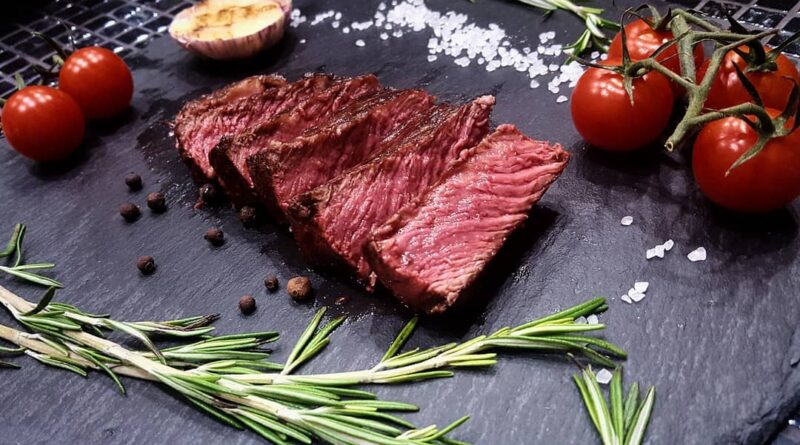 As soon as the primary problems of the primitive time of lack of food and heat receded into the background, and man learned to breed animals, he wondered “how best to cook”.

Meat has been eaten by mankind since the first mammoth killed. At that severe time its consumption was a necessary element of survival – replenishment of organism resources with necessary quantity of protein and microelements. As soon as primary problems of primitive time of food and heat shortage retreated to the second plan and the man learnt animal breeding, he wondered “how to cook better”. Naturally, there have been countless ways to make a dish out of animal meat since then. But perhaps the most popular and beloved by real gourmets for several centuries is steaks. That’s what we’ll talk about.

Well, what are they…?

In fact, this dish can be cooked from any type of meat and even fish, but still in the classical view of this is used cattle. As a rule, pieces (from 3 to 5 cm thick) are cut out of those parts of the carcass that did not participate in muscle activity. And such only 10 percent of the total volume. That’s why the price of steaks is so high.

If we look for the roots of the origin of steaks, we can see that back in Ancient Rome priests roasted large pieces of beef on the grids for sacrifice to the gods. In the Middle Ages in Europe, this meat was little valued. Only a little later in England began to specially feed young bulls in order to obtain a quality product when slaughtering. In 1460, the recipe book by Beltis Platinus described the technology of cooking veal on open fire. This tradition later spread throughout Europe, which explains the presence of the English words “steak” and “roast beef” in all languages, including Russian.

However, it is generally accepted that steaks are still a national American dish. Even though Christopher Columbus brought meat cows of the Long Horn breed to the New World and later brought English Hereford and Scottish Angus, the consumption of specially cooked pieces of meat is so firmly embedded in the culture of the United States that the whole process, from the cultivation and fattening of bulls to the certification and sale of fresh beef is strictly controlled by the government.

The largest supplier of meat for steaks is considered to be the USA. However, Australia, New Zealand and Argentina try to keep up with the reputation of meat powers by maintaining high standards and providing products of excellent quality. But Japan is considered by professionals to be the best producer of raw materials for steaks.

Unfortunately, the export of beef from this country is strictly limited, so its price is unusually expensive. By the way, in the country of the rising sun was invented “kobe steak”, which is prepared from a special kind of veal. Six months before slaughtering, the animal will actively appear with clarified yeast beer and massage its back, which makes the steak extraordinarily soft and acquires a special taste.

It should be noted that there are two systems of fattening young bulls: grain and herbal. The most valuable are animals grown on grain (in America corn is used for this purpose, in Australia – wheat), because inside their muscle fibers are formed thin fat layers. This beef is called marble and is more tender and juicy than the meat of a bull of grass fattening.

Real steaks are never made from steamed beef. It has to endure for at least 20 days, during this period fermentation occurs and muscle tissue becomes more loose and tender. As mentioned above, the pieces of meat are cut transversely. This allows heat to pass through the “pores” of the fibres, quickly heating the product to the desired temperature.

You have to understand that a steak is not just a piece of meat roasted on both sides. There are over 100 kinds of steaks in the world. Each has its own unique name, which is formed from the name of the part of the animal from which it was carved, the name of the breed of cow, breeding grounds and feeding method. Properly prepared by a professional, the process is a true art, directly dependent on experience.

First of all, the raw steak should be lightly fried on one side and on the other in an open fire until crust is formed so that the juice inside is evenly distributed and does not leak out. Then bring it to the desired level of readiness on a tray, grate or pan. According to the American classification system, there are six degrees of steak frying: Very Rare (very raw), Rare (raw with blood), Medium Rare (medium raw with a predominance of pink juice), Medium (medium fried meat with pink meat juice), Medium Well (almost fried), Well Done (completely fried to complete dryness).