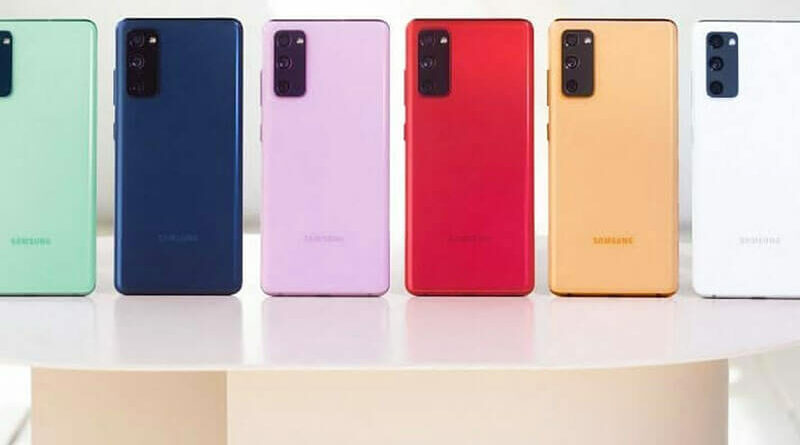 Today, Samsung during its official presentation showed the flagship smartphone Galaxy S20 FE (Fan Edition). As the name implies, the smartphone will offer in the new flagship what the company’s fans want the most. According to the company, they offer all the main features of the Galaxy S20 at a more affordable price.

The smartphone is equipped with an AMOLED display with FullHD + resolution, the main advantage of which is the support of the refresh rate of 120 Hz. The display of this smartphone differs from other flagships of Samsung Galaxy S20 by its larger frame. At the top of the display is a cutout for the front camera at 32 MP.

It should be noted that the Galaxy S20 FE has a dynamic refresh rate, which varies depending on what the owner of the smartphone is using at a particular time. Due to this it is possible to achieve a balance of smoothness and autonomy.For autonomy, by the way, the responsible battery with a capacity of 4500 mAh, which is guaranteed to suffice for a day of active use. There is support for fast charging with a capacity of 25W, but complete with a smartphone, unfortunately, the company supplies a charger with a capacity of 15W. There is also a reversible wireless charger, which allows you to charge headphones or smart watches from your smartphone.

PlatformThe flagship Qualcomm Snapdragon 865 Plus chipset is responsible for the operation of the smartphone, and the standard version was responsible for the operation of the Galaxy S20 models released earlier. For models with 4G, a version on the Samsung Exynos 990 processor will be available.Paired with the chipset will be 6 GB of RAM, there will also be a version with 8 GB. The internal memory in the 4G version, which will be sold in Ukraine, will be 128 GB in all versions, but the 5G version will also have 256 GB available as an option.

Samsung Galaxy S20 FE camerasThe model is equipped with a main triple camera, which includes a 12 MP main sensor, which has optical stabilization and phase autofocus, an ultra-wide 12 MP sensor with electronic stabilization and f / 2.2 aperture and a telephoto module with triple optical zoom and optical stabilization.Apparently, the main sensor has moved from the older models S20 and S20 Plus, and ultra-wide and telephoto should be simpler. This was to be expected, given the price of the model. However, the quality of shooting should be good, but to say for sure, you should wait for the first tests, which will be soon.

FeaturesDespite the more affordable price than the flagship Galaxy S20, presented earlier, the company did not deprive the S20 FE of flagship chips. The model has stereo speakers, dual SIM card slot, IP68 and NFC. The company did not make any exceptions in terms of chips, which is gratifying, because last year’s Galaxy S10 Lite, which is similar in concept to the Galaxy S20 FE, did not have many chips of the flagship Galaxy S10.The model is made of polycarbonate and aluminum (rear panel and body frame, respectively). It weighs 193 grams and is 8.4 millimeters thick, which is good considering the volume of the battery. The smartphone will be available in blue, lavender, orange, white, red and mint.

ConclusionsSamsung Galaxy S20 FE turned out to be quite a good smartphone, as Samsung managed to correctly identify the main flagship parameters that are of interest to users (including fans) of the company in the first place. The official price in Ukraine is 19,999 hryvnias, but now it is offered to be ordered at a reduced price – 17,999 hryvnias, which is really good compared to other flagship smartphones from Samsung.The Galaxy S20 FE is really worth buying if you are a fan of the company and want to get a flagship smartphone with a good display, chipset, camera and battery, but at a price cheaper than $ 1,000. You should wait for the first tests and user feedback to find out whether to buy it or not.