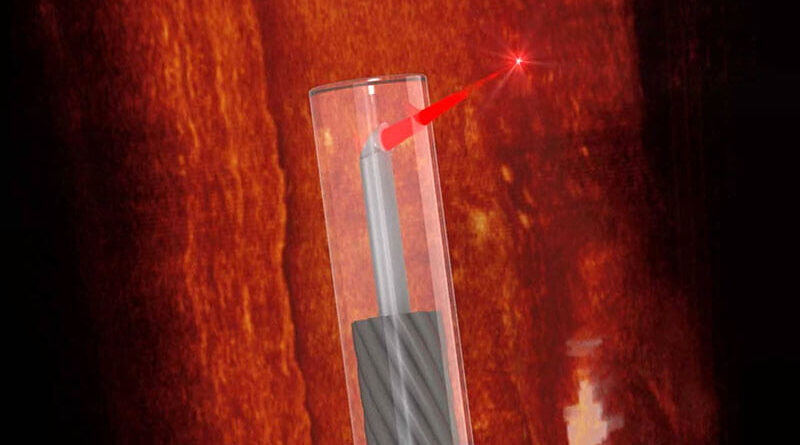 An interesting new invention by a joint team of material engineering specialists from the University of Adelaide and the University of Stuttgart was announced today – the fact that scientists have managed to create the world’s first microscopic chamber lens, which, due to its size, can easily interfere with the inside of blood vessels and capture 3D images of channels and vessels. The main purpose of this development is to provide physicians with a more accurate and detailed view of the first signs of cardiovascular disease and to further deepen their knowledge of internal processes in blood vessels.

The basic design of the given chamber lens has been created by means of the specially adjusted 3D printer which has finished all work, thus while developers prefer to hide in a secret used materials and concrete type of technology as it is considered an intellectual secret – it is quite possible that soon they will receive the patent for it. The camera lens itself is attached to the thinnest cable, approximately equal to the thickness of human hair, which in turn gets into the blood vessels without any hindrance and starts its work – preliminary research on mice confirmed the developers’ expectations and demonstrated that there is still room for them to grow.

In addition, there is always room for further improvements, not to mention the fact that at the moment the developers are interested in further increasing the sharpness and contrast of the resulting images. Given this success, there is no doubt that relatively soon the team will present something similar.

It’s worth mentioning the fact that camera lenses for studying and researching blood vessels somehow assume quite a large and complex amount of work on this technology, and that’s why the developers, although they remain optimistic, still point to the fact that we should be realistic – so we’re unlikely to see a broad commercial move of such blood technology in the next few years. Unless, of course, some improvements are presented.