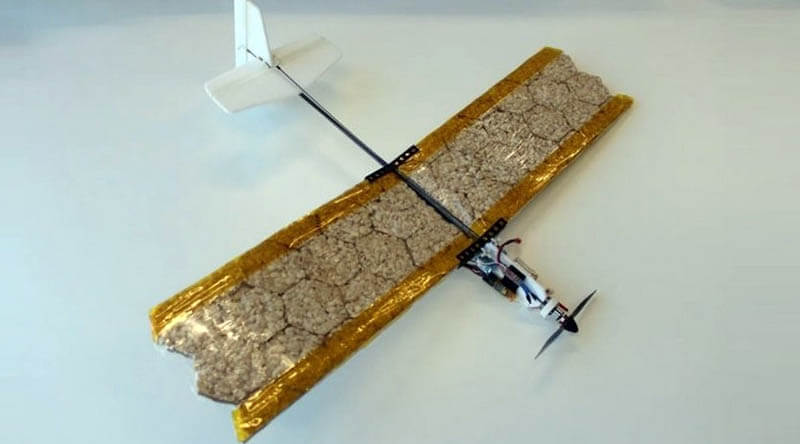 Seven-meter wings made of rice cakes paired with an engine allow the device to accelerate up to 10 m/s.

Scientists from Switzerland have developed an unmanned aerial vehicle with edible parts in case of emergency. They presented their invention at the International Conference on Intelligent Robots and Systems in Kyoto, IEEE Spectrum reports.

Employees of the Swiss Federal Institute of Technology in Lausanne (EPFL) noticed that most of the weight of drones are parts that, although they ensure its operation, are not useful for humans. They decided to replace some parts with food that people can eat if necessary.

Bokeon Kwak, Jun Shintake, Lu Zhang and Dario Floreano presented a drone with wings made of compressed air rice, which has characteristics very similar to the foamed polypropylene used in the construction of UAVs – it is light, strong, cheap enough and easy to process with a laser. The resulting rice cakes are nutritious enough to serve as a good breakfast.

The scientists took ready-made rice cakes and cut hexagons out of them using a laser machine, which were then glued together with edible gelatin. Then the workpiece was packed in plastic wrap and fastened with tape to prevent the wings from getting wet and falling apart in a humid environment.

And here the size of the drone is determined not by flight characteristics, but by nutritional needs. Rice-gelatin wings with a wingspan of about 7 meters have an energy value of 300 kcal, enough for a person to eat, even for a short time. Thanks to this, people in trouble will be able to hold out until the rescuers arrive or replenish their strength for independent movement.

According to engineers, most UAVs can have a payload of 30% of the total weight, and the new approach has increased the share to 50%. The rest of the prototype is inedible, because it is made of foam and carbon fiber. The engine accelerates the vehicle to 10 m/s, and battery-powered servos move the tail parts to control the flight. In the future, the inventors plan to add more edible elements and make the drone carry edible containers with cargo such as water.

The head of the study, Bokeon Kwak, told IEEE Spectrum that the engineers also plan to improve the aerodynamic properties of their device, primarily to increase lift and reduce drag by changing the shape of the wing. If this succeeds, the drone will be able to fly longer and carry more weight. 3D printing technology, which is already being tested, will help them in this.

Earlier, engineers figured out how to make the quadcopter fly almost endlessly. They connected a device called V-Line Pro to the DJI M30 quadcopter, which constantly feeds the aircraft with energy, but only if it is connected to it with a 100-meter cable.

They also wrote about a new unusual model of the XAG P100 drone. It is equipped with a liquid spraying system and can lift up to 40 kg.