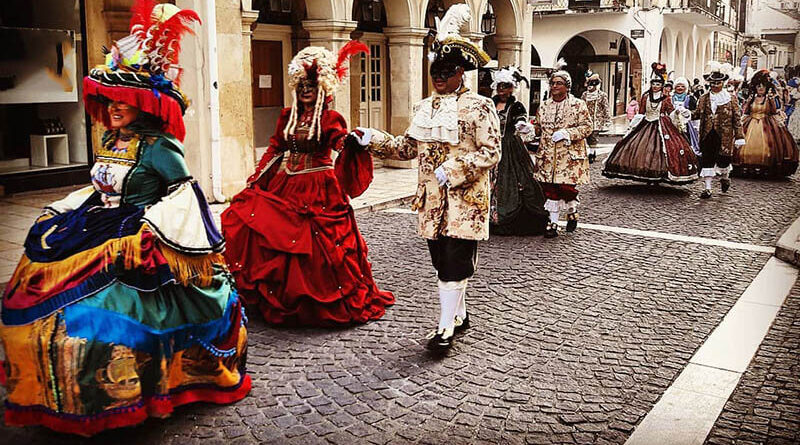 “Carnival” – the mere mention of the word conjures up feelings of celebration, brightly colored masquerades, and, of course, some mystery. Today many cities around the world annually organize similar festive processions and performances, but still the most famous in Europe is considered to be the carnival in Venice. This ancient city, which is akin to water more than to land, for more than 900 years is the main stronghold of the spectacle for almost a week.

In 2011 the Venice Carnival will be held from February 26 to March 8 inclusive. Even if you have already visited Venice several times and been here in different seasons, and you can safely say that you know this city better than your five fingers, only during the carnival you can feel the spirit of this amazing atmosphere of festive Venice. In addition, the 10 days of spring carnival will be an unforgettable gift for you and your loved ones for the upcoming holidays.

In its origin, the Venetian Carnival is essentially an analogue of our usual Shrovetide. Both Orthodox and Catholic, the week before Lent was a week of debauchery – with dressing up, theatrical performances, and, of course, a variety of goodies and sweets that could be bought from traveling stalls around the city. There are two of the most popular explanations for the origin of the word “carnival. They both complement each other in the best possible way.

The most common version belongs to the Catholic Church, which claims that the word came from the Latin carne vale, which means “farewell to meat.” Another version, however, is from the Latin carrus navalis, “fun chariot, ship of festive processions,” i.e., some festive action.

The festive days quenched not only the gastronomic fantasies of the population: during the carnival nothing seemed too shameful, too daring, too reckless, or too promiscuous. Carnival became an outlet for people living under strict religious taboos, and the masks and costumes allowed an escape from the prejudices dictated by class. “I concealed myself under the clothes and mask of a clown. My thoughts, intentions, actions are unexpected. I am able to constantly reincarnate and do with laughter what to many may seem forbidden or obscene. To love without loving…,” wrote Giacomo Casanova about Carnival.

“Holidays are holidays, but it’s time to know the honor!” the church decided, when the use of masks and the opportunity to be unrecognized so appealed to local residents that they began to be used on ordinary days as well, of course, most often for not the most humane purposes. To prevent the spread of indecent acts in 1608 issued a decree, according to which men for wearing masks in everyday life were sentenced to two years in prison and a fine, and women were publicly flogged on the square. Today even outside the carnival Venice is filled with a variety of masks, but still more often as souvenirs for tourists and collectible copies for connoisseurs of high art.

Speaking of masks: the prototype of traditional Venetian masks is the masks of the theatrical street performance “Commedia del Arte”, which included both good and beautiful-looking characters, and all sorts of monsters. Hence the elegant and romantic images of the “colombina” and “moretta”, as well as the creepy-looking “bauta”, “volto” and others. During the carnival most of the townspeople and visitors move around the city wearing masks, so it takes some time to get used to this unusual environment of mysterious characters.

Especially quickly you lose your sense of comfort when the mask of the “healer of the plague” approaches you. Its distinguishing feature is its long beak-like nose. Once upon a time, special aromatic substances were placed in it, which supposedly prevented the healer from contracting the plague, a disease that has visited Venice more than once. Along with the mask, the character’s costume also works on the sinister bird image: as a rule, it is a dark cloak reaching to the heels, and some kind of cane or stick in his hands, so that the “healer” does not touch anything infected.

Carnival participants are very careful in their choice of costume and mask. Many come to this annual performance several years in a row, each time striving to surprise the audience with something new. Particular attention is paid to costume details: accessories, jewelry, matching patterns on the details of the dress, mask, fans, canes, and even shoes. Some

buy ready-made costumes in specialized stores, but more frequent carnival frequenters make it on their own or to order on their own sketches.

They spend a lot of time and effort, but also a lot of money, because each “real” costume is a work of art of the highest category. You can see this for yourself by watching one of the tours or the finals of the traditional competitive costume parade in Piazza San Marco. Since many people come to the carnival as families, the costumes are usually chosen in the same style for each family member and even for four-legged pets. During the festivities on the streets of Venice, you can often find the dogs walking on a rhinestone embroidered leash in a fashionable costume style.

If you haven’t been preparing for the carnival for a year, but still decided to take part in it without limiting yourself to being a bystander, you can rent costumes. In addition to agencies in Moscow to rent costumes and masks, many hotels in Venice itself offer similar services. Believe me, you will be filled with indescribable delight when you in a beautiful costume can become a real part of the most famous carnival in Europe! Your stage will be not just a square of the city, but all the streets and bridges, embankments and canals of Venice. When else will you have a chance to ride in such an unusual attire on the Grand Canal in a gondola or on the local “water bus” Vaporetto, or to drink a cup of the famous hot chocolate in a cozy cafe, catching the rapt attention of tourists who are not in costume?

By the way, there are several unspoken rules, which, if possible, are observed by all costumed carnival participants. The most important thing is to keep your person a secret, i.e. not to talk and not to reveal who you really are. Often other participants, upon seeing what seems to be a familiar costume, will approach to find out if it is the person they think it is. But the point of the carnival is to keep everyone unrecognized, so you find yourself in the full right to avoid answering by only bowing slightly or making an elegant gesture with a fan or cane.

Another thing to be prepared for is that they are constantly trying to take your picture. Later, many pictures of you might end up on popular carnival forums and even calendars! You can refuse to be photographed, but if you do decide to, we advise you to think in advance about the most appropriate and interesting poses and gestures for your character. Each costume and mask have their own characteristics and character. For example, there’s no use trying to coquettishly put aside your leg for a lady in an 18th century dress with a crinoline – you simply won’t see it. But the graceful posture supported by a corset and a mysterious smile (again, if the mask will allow to show it) will help you to create a wonderful image and get great pictures of the remarkable event.

During the carnival you can buy a mask at a price even lower than, for example, in the summer season. Everywhere in town are open stores and mobile stalls with products for every taste and budget. Local craftsmen, however, resent the fact that most of the products sold have more to do with China or Korea, where masks are made from cheap materials and not of high quality, and then sold cheaply to the delight of delighted tourists under the guise of “real Venetian masks.

If you want to be 100% sure of the origin of your mask we advise you to buy it in one of the traditional salons or stores, addresses are always in the guidebooks and tourist brochures. There is another way to get a Venetian mask – make it to order. The city are open small workshops, where at your request within a few days to create for you a real Venetian works of art. Prices for such services vary: from 20 to several hundred euros.