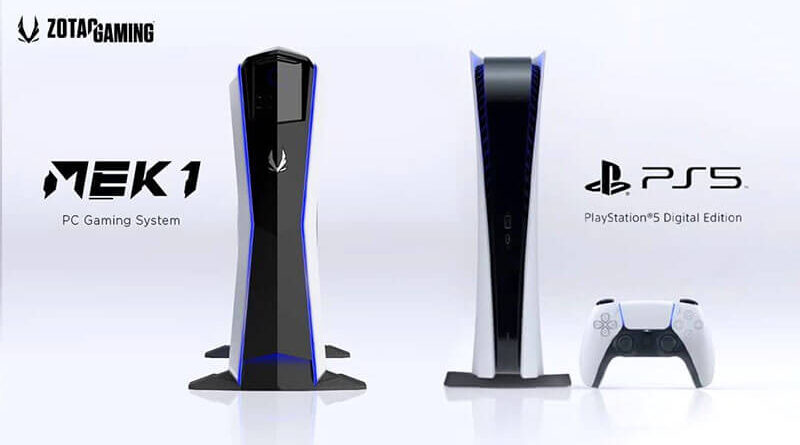 As you know, announced in mid-June 2020, the game console Sony PlayStation 5 received a very unusual design. Many people liked it, but there were also those who did not like it at all. Yesterday to comment on the appearance of this game console from the Japanese corporation Zotac, which published a comparison of the novelty with its proprietary gaming computer called MEK 1. As you can easily see, in terms of appearance PS5 design actually very similar to the appearance of this PC, at least on the front side exactly. The device has not only a very similar appearance and similar colors, but also the backlight, because it is also blue or navy blue. Zotac is convinced that the MEK 1 looks similar to the Sony PlayStation 5, although the PC was introduced much earlier, so the Japanese corporation simply could not copy it, because its appearance was kept strictly secret until the very end. However, it should be understood that it is unlikely that the engineers of the Japanese corporation decided to replicate the product of another company, especially since Sony is among the brands that can afford to spend tens of millions of dollars on the appearance of the console alone, not to mention its technical equipment. Both electronic devices are similar to each other only on the front, while on the side and back they look completely different.

In the case of the Zotac MEK 1 case, the user encounters tough aggressive parts of the case that belong to the aggressive gaming design. In the case of the PS5 game console, all its elements and boundaries are smooth, which creates the effect of minimalism. Of course, it is possible that at one time Sony engineers and designers liked the design of the computer from Zotac, so they decided to move in this direction, creating a completely new and independent solution. In any case, for end users it is not so important, because everyone can buy exactly what they like best. However, in the case of the PlayStation 5 there is no choice, as it was presented and will soon be released in only one case and color, at least at the time of the start of sales. Official sales of the Sony PlayStation 5 game console will begin worldwide in late 2020, probably in mid-December. It is expected that the purchase of this console in the full version with Blu-Ray drive will cost 700 euros.