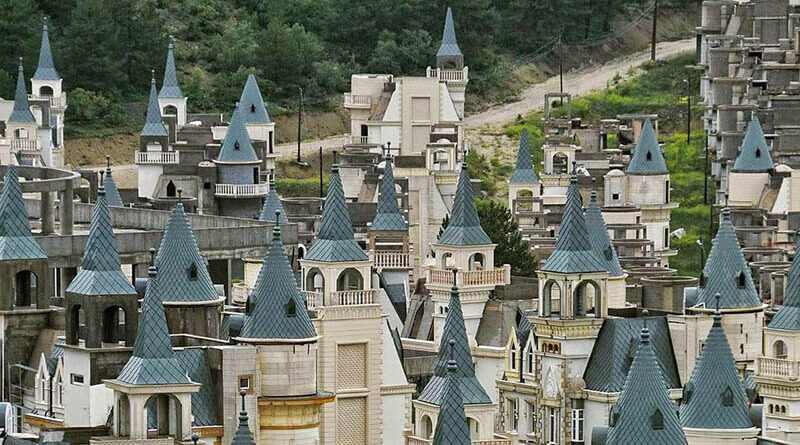 Recently, the so-called “spooky” tourism, which involves visiting abandoned villages and towns, has become increasingly popular among travelers. Firstly, to be afraid, and secondly – for the sake of picturesque photos, of course. Thus, according to the requests, the interest in “ghostly” villages among the users of the famous photo service Pinterest rose this year by 181 percent, reports the Independent. In this regard, the publication has compiled a “black” list of the 13 most spooky abandoned cities in the world.

First on the list is the small town of Craco in southern Italy, founded in the eighth century. At the best of times it was home to about 1,500 people, but since the early 1960s even they have gradually left their homes. The reason was a series of natural disasters. In 1963 people were evacuated because of a landslide. Ten years later, there was a flood, a similar number of earthquakes. Since about 1980, no one has lived in Krako. But excursions for tourists are conducted. One of the attractions is the miraculously surviving statue of the Virgin Mary. And since some time, Krako has acquired a “cinematic” fame. For example, filming of “The Passion of the Christ” and James Bond’s “Quantum of Solace” took place here.

Next is the city of Terlingua, Texas. In 1903 there were about 3,000 people living here, but in 2010, according to the census, only 58 remained. The reason for this is the depleted supply of cinnabar (a mineral containing mercury), the extraction of which was the reason for hammering the first nail in the wilderness. Today there is still some life in Terlingua, but only a few families offering modest excursions – visits to dusty churches and farms.

The town of Pripyat in Ukraine, just 94 kilometers from Kiev, is probably the most famous ghost town in the world. Before the explosion at the Chernobyl nuclear power plant over 30 years ago, 50 thousand people lived here. Now Pripyat is “famous” for empty schools, cinemas, hospitals and stores, where everything has been lying in its place since April 26, 1986.

Like Texas’ Terlingua, the city of Calico, California, was founded for industrial purposes. Since 1881, silver was actively mined here. Later, Calico had about 500 mines and about 3,000 locals. Once the treasure ran out, so did the people. However, the town was left with fashionable hotels, restaurants, and other places where wealthy industrialists lived. The buildings were dilapidated, but survived until the middle of last century, when they (and the whole town in general) were purchased by businessman Walter Nott. He began to restore Calico from old photographs. As a result, the abandoned town has become a registered historical monument.

Fifteen kilometers from the Japanese city of Nagasaki is the ghost island of Hashima, where in 1881 there were underwater coal mines and there were 5,000 locals. All of them, as soon as there was nothing left to mine, according to a well-known scenario, left their homes. And since at one time there was a lot of life on the island, many things were built, boats with tourists every now and then dock to the shores of the now abandoned Hasim.

The mining town of Granat in the U.S. state of Montana was once beloved by gold and silver prospectors. Over time (early last century) about a thousand people settled here. However, work in the city was no longer in 1940, and people scattered. Today, for three dollars, anyone can walk around the Pomegranate, which has been preserved in its “pristine” form as a historical monument. For extreme lovers camping on the outskirts of Granat. And yes, this abandoned town is indeed named after the gem.

The town of Thurmond in West Virginia was founded in 1800 by the same miners. After 2000, Thurmond was already listed as abandoned. The most impressive thing about the town is the old railroad, surrounded by dense forest. And probably only the most adventurous travelers will venture around the town’s only railroad station.

There is a ghost town in the African desert. It is called Colmanskop (Namibia). In the early 1900s, there were diamonds and, consequently, people (German miners). Restaurants, a casino, a bowling club and so on were built to serve them. However, the “diamond empire” also collapsed. The luxury of Colmanskop’s heyday has been undermined by sandstorms, but the area is still worth seeing.

Virginia City, Montana, was founded in 1863 and had about 10,000 residents. No one lives here now. The “highlight” of this ghost town is the opera house.

Between 1911 and 1938, millions of dollars flowed through the town of Kennecott, Alaska. Gradually, however, the flow dried up and by 1950 there was not a soul here anymore.

The town of Animas Forks, Colorado began in 1873 as an up-and-coming mining settlement. Now it looks more like an abandoned village, with houses, a few stores, a post office, and a ramshackle jail.

People left Ross Island in India because of the high mortality caused by endless natural disasters. However, the old buildings (18th-20th centuries) – houses, a church, a hospital, etc. – are still perfectly preserved in the jungle.

The town of Riolite (Nevada) at the beginning of the last century was a place of residence of the infected “gold rush”. Now all that walks in Riolite is the wind and the occasional tourist. Already at the entrance to the town one feels uneasy. Visitors are greeted by a strange sculpture – a miner walking with a penguin in the middle of the desert. In addition to the standard “infrastructure” of the city itself, there are quite amazing structures. For example, a house made of bottles.