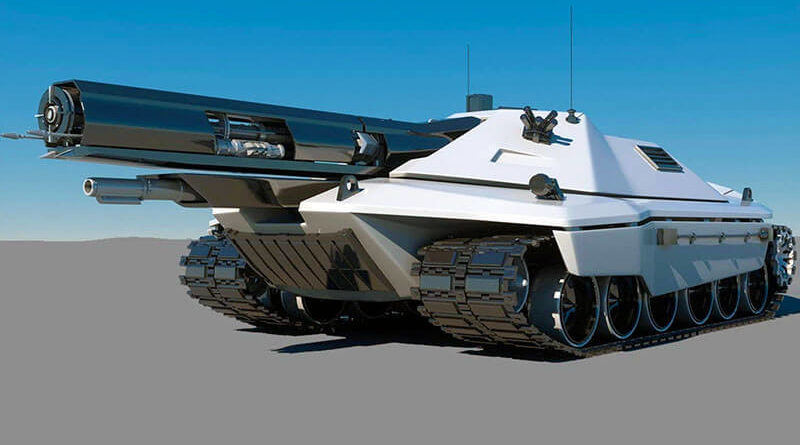 T-90 According to many experts, the most powerful tank in the world is the domestic T-90. It was developed in the far 80s, and then it was called the T-88, but soon changed to the T-90. In the early 90’s, large-scale production of the model began. In five years, about 120 T-90 tanks were produced. And in the early 2000s, a modification called T-90A was released.

The main weapon T-90 is a 125 mm smoothbore gun, 2A46M-2 launcher. The weapon has 43 rounds of ammunition, 22 of which can be folded into the rotating transporter of the charging machine. Another 21 shots are not mechanically stacked. The powerful tank is equipped with a 7.62 calibre PKT twin machine gun, and its ammunition consists of 2,000 rounds (or 8 ribbons of 250 rounds each). It is certainly not the most powerful machine gun, but in combat conditions it serves as a good support. Also, the tank is armed with an anti-aircraft machine gun. It has a remote control, and it can fire on both ground and air targets, while the hatches of the tank remain closed. The aiming angle is 180o horizontally or 360o from the turret of the tank. The anti-aircraft machine gun is provided with a ammunition set of 300 rounds (2 ribbons of 150 rounds each). The main anti-tank weapon of the T-90 is the armour-piercing projectiles (3BM-26, BM-29, 3BM-42, 3BM-22), as well as the 3UBK20 and 3UBK14 guided weapon system.

The tank also has a guided weapon system “Reflex”. Its range performance is 2.5 times higher than that of any tank fired in the 21st century. This is what gives the T-90 a huge advantage even before the enemy enters the return fire zone. Among other things, the T-90 is fitted with additional equipment: 1A45-T fire control system, 1G46 gunner’s daytime sight, PNK-4S commander’s sight and observation system, TO1-KO1 night sight with TPN-4 “Buran-PA” electronic optical converter, as well as 1B528-1 ballistic computer for ballistic corrections calculation. Modified T-90S and T-90A have an improved fire control system. They have a thermal imaging sight “Essa” and an optronic suppression complex “Shtora-1”.

Such machine weighs exactly 46, 5 tons and accommodates a crew of three. The length of the tank together with the gun is 9.5 meters, and the width of the caterpillar is 3.4 meters. The vehicle can reach speeds of up to 60 km/h on paved roads. On a dry dirt road the speed drops to 40 km/h.

The T-90 is protected by high hardness steel barriers with reflective sheets. The frontal assembly has a dynamic protection “Contact-V”. It provides protection against both cumulative PTC and OBPS. The filler bags can be classified as “semi-active” type. There are 21 containers on the roof of the tower to repel attacks from above. In general, the protection of tanks is weakened due to the design features and high-quality equipment and armament.

The timeless T-34 or, as it is called, the “Thirty-Four” is a legend in the Soviet tank industry. During the Great Patriotic War it was referred to as a miracle. British Prime Minister Churchill said he did not understand where the mysterious T-34 came from, and Hitler, according to legend, admitted that he would not have gone on the offensive against the Soviet Union if he knew about this machine of death. After the death of T-34 designer Mikhail Koshkin was called “the personal enemy of the Fuhrer”.

The characteristics of the tank are impressive. In 1940 the T-34 was adopted for service together with the heavy KV-1. At that time, it weighed about 26 tons and accommodated a crew of 4 people. The thickness of the tank armour reached 45 millimeters. A distinctive feature of the model was a V-shaped 12-cylinder diesel engine V-2-34 with an output of 500 horsepower. The crew also had a 76.2 mm L-11 gun and two 7.62 mm DT machine guns.

In 1941 the first changes were made to the T-34 design. The cast tower was replaced by a welded one, the thickness of armour increased to 52 millimeters. The armament also increased – instead of the L-11 gun they installed the F-34, which had a higher power with the same caliber. For the sake of modifications, it was necessary to sacrifice the toolboxes hidden on the boards and right headlights. A year later the armor increased by another 8 millimeters and additional fuel tanks appeared.

Iron monsters are still being produced these days. These are some of the most powerful tanks of our time.

One of the most popular tanks of the 21st century, the Leopard-2 A7 is the result of a collaboration between Rheinmetall and Krauss-Maffei Wegmann. It boasts mobility, a modular protection package, excellent reconnaissance skills and a fairly accurate fire control system. In 2010, the tank was tested, and now it is in service with the German Army. The leopard cannon fires 120 mm explosive shells.

With the adapter bucket, the Leopard-2 A7 can remove obstacles on the way. The tank is equipped with the MTU MB 873 Ka-501 diesel engine with a fluid-cooling function, allowing the vehicle to travel at 68 km/h without stopping for more than a day.

The British tank is designed by BAE Systems Land Systems. It is in service with the Royal Omani Army and the British Army.

The machine has an L30 cutting tank gun. Later models are produced with smoothbore gun.

The turret of the tank rotates 360o. The weapon can be raised from 10o to 20o and is controlled by means of stabilization and electronic systems. Thanks to the 12-cylinder Perkins Caterpillar CV12 diesel engine, the tank can reach speeds of up to 59 km/h. The tank has a 7.62 mm Boeing machine gun, which is located to the left of the gun. The turret has an antiaircraft gun L37A2 GPMG with the same caliber, as well as five smoke grenade launchers L8.

Israeli tank was first shown at the Weapons Show on June 24, 2002, but was officially handed over for field trials in December 2001. The serial production of the new Merkava model started after the Merkava Mk 3 was removed from the assembly line in early 2003.

The tank is equipped with a 120 mm cannon, which fires advanced multi-purpose and anti-tank shells. The vehicle has an advanced fire control system and a unique combat control system, which provides a clear and accurate picture of what is happening outside – both systems are designed by Elbit Systems.

Merkava Mk 4 uses a diesel engine V-12, which allows to exceed the speed of 60 km/h. Inside the tank is hidden life support system: ventilation, biological, nuclear and chemical filtration systems, as well as individual cooling systems and power generators.

The tank is a new generation tank designed by Russian designers in 2009. “Armata” is an innovative universal tracked platform; in the future it is planned to create a whole family of combat vehicles based on this TSUE.

Among other innovations is a single armored capsule for 3 crew members, separating the room with people from ammunition and fuel tanks, which increases the safety and efficiency of communication with the crew. In general, the “living” room has become more spacious and comfortable, the ergonomics of controls has been improved.

T-14 has 4 levels of protection: stealth painting, KAZ “Afghanistan”, electromagnetic mine protection system, as well as dynamic armor that covers the roof with hatches. The T-14 is equipped with a smooth-bore 125-gauge cannon with the ability to launch guided missiles. For infantry fighting there is a machine gun with remote control. The standard T-14 projectile is a 90-centimeter Vacuum-1 BPS.