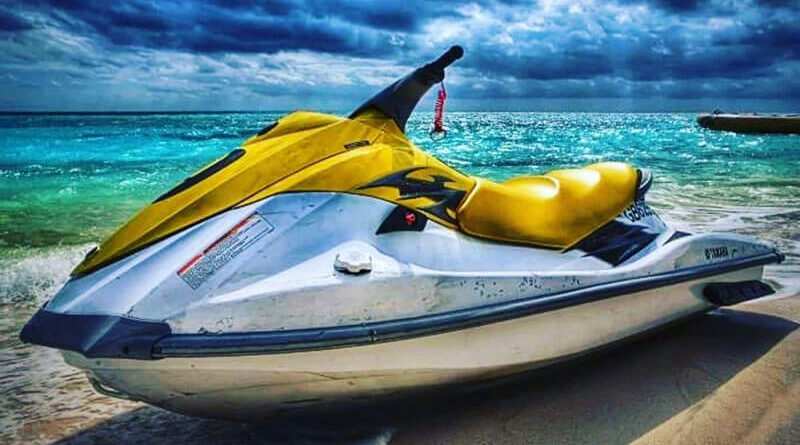 In my opinion, the coolest entertainment is a mechanical dolphin. In fact, it is a personal submarine, designed in the image of an animal at Innespace Productions back in 2009. The “Mechanical Dolphin” can reach speeds of up to 65 km/h and jump out of the water spectacularly.

Just like a Hydrodome BOB dolphin moves underwater. The design looks like a scooter or motor scooter with a sealed helmet, for one person. It is a real underwater moped with a drive. It has an oxygen tank, and the head area is covered with a transparent dome, which provides excellent visibility.

Jet-powered reactive backpack with hydromotorcycle drive. The cost of 4900 euros. The inventor of the device Franky Zapata and his company Zapata Racing. It rises in the air with four jets of water – two main platforms spew out from under the feet of the rider, two more additional – from the hands of a man. The backpack is connected to the water bike with a 9-meter hose and uses its jet stream. The traction is controlled on the bike, but as an option it is possible to control the motorcycle engine from the backpack.

The fastest means of transportation on water today, driven by the muscular force of man. The design is extremely simple. Several metal parts, a place for the legs and the so-called steering wheel. Combining jumps and jerks, the rider drives a device that slides on water due to hydrofoils.

Riding on a board driven by the force of wind through a kite. Who came up with this entertainment is hard to say, too many people have been doing it. But it is known that Bill Rossler, a Boeing specialist, and his son Corey patented “KiteSki” – a system that includes water skiing and 2-stroke kite type delta.

Very dynamic attraction on the water, known since childhood. It was on these skis that the hare from the cartoon “Well, wait.” It was also one of Yuri Gagarin’s favorite attractions.

The blob (water catapult) shall be installed on the water and the depth, where it ends, shall be at least 2.5 m. The water cushion is fixed at the sides by special fastening units. Next to the block there is a tower from which the first “block” jumps on the catapult. At this time on the other end of the Blob sits another “Blobber”. The air inside the block (blob) moves to the opposite part of the inflatable cushion, where the second “blober” takes off. But that’s all the words that come out of it, see for yourself.

It’s also quite a dynamic ride, but unlike the rest of the passive ride, the saddle is not available with any control features. At the request of the organizers of the attraction can ride with a coup. On a banana, there is one chip on the last place, you can hang and slide on the water holding only his hands, did so many times.

Zorb is more of an amusement for children, an inflatable balloon inside which is launched by a person and it slides on the water rolling and tumbling. A zorb is a plastic ball consisting of two spheres, the space between which is filled with air. In the inner sphere of the zorb there is a suspension system (harness) to secure the zorb passenger, who is called a “zorbonaut”.

Or water lines, allow you to walk on water like on land. The device is an inflatable walker, which is worn on his feet and due to their lightness and large area becomes available option gods – walk on water.