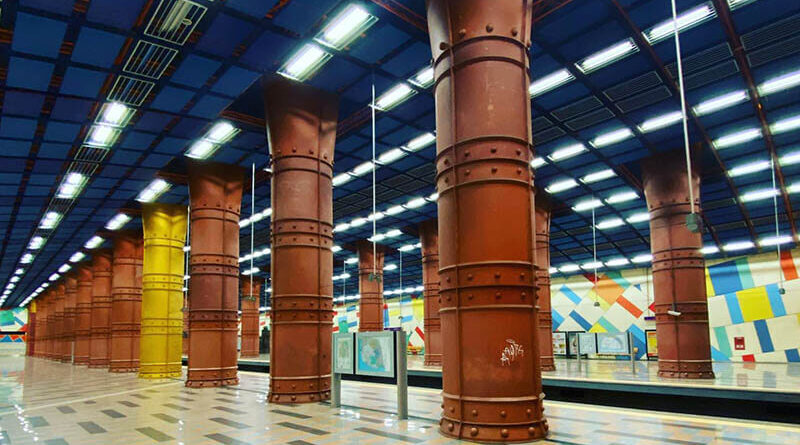 It is generally believed that the most beautiful subway in the world was built in the former Soviet Union. Certainly, the underground marble palaces in Moscow and St. Petersburg, Kiev and Tashkent cannot fail to impress, especially ordinary people from the “capitalist camp,” accustomed to the strict functionalism of their subways. Nevertheless, even there, to the west and east of the space, once united by the idea of building communism, there are stations that can compete with our former brotherly neighbors. Onliner.by has selected the ten coolest ones for you.

In the second half of 1960s and first half of 1970s Stockholm tunnelbana was developing especially actively. A large part of the tracks of the most recent Red and Blue subway lines went underground, forcing the builders to work under difficult conditions. They had to actually cut tunnels and stations at a depth of 25-35 meters in the rock base on which the city stands. The difficulty of the task was compensated by the end result.

At most of the “rock” stations of the 1970s and 1980s it was decided to make rock the main decorative element of their design, and to give the underground subway stations their individuality – to give them to modern artists and sculptors who managed to form a decent frame for the harsh Scandinavian entourage. Each station managed to give its own face, preserving the overall unique style, a good example of which is, for example, Ratusha station in the center of the Swedish capital.

But even Stockholm’s Rathaus does not compare to the station of the same name in Bochum, Germany, in its ability to make architectural minimalism an unusual virtue of the project. The bureau Pahl + Weber-Pahl Architekten, which won the bid to create the site, proposed a return to the bare concrete aesthetic so popular in the 1960s and 1970s.

The monolithic structures of the single-span station were deliberately left in their original form. To diversify its internal appearance, it was decided to make the ceiling in the form of intersecting ribs at sharp angles, which are additionally cut by glass skylights that go directly to the ground. Spectacular wall lighting completes the brutal interior, which will not be to everyone’s taste, but will definitely be remembered by everyone. A similar artistic image would be appropriate to use in the Minsk metro at stations located in working-class, factory districts, for example, at the promising Shabans.

Of course, European subways are not limited to minimalism alone. In 1998 for the opening in the Portuguese capital of the World Expo 1998 dedicated to the oceans six new stations of the local subway were put into service. All of them are similar in their design thanks to their use of modern art, but even against this background, the Olajas station stands out.

Architect Tomasz Taveira, teaming up with several artists, proposed two seemingly diametrically opposed decorative approaches to Olajas. On the one hand, the station’s columns were clad with rust-colored metal panels with imitation of rivets, which created a dieselpunk image of the second half of the 19th century with its industrial revolution; on the other hand, this image strictly contrasts with the bright finish of the station walls and the aggressive, almost suprematic constructions in its foyer. The result is a dynamic contrast of old and new, conservative and topical, simultaneously in struggle and in inseparable unity.

Until the mid-1990s it was a regular old Paris station, opened in 1904 next to the National Conservatory of Arts and Crafts and therefore named Arts et Métiers. But in 1994 for the 200th anniversary of the institution it was decided to reconstruct it, turning it into an art object not too typical for the Paris metro.

Belgian artist François Schuiten developed a conceptual project that was intended to remind the French and visitors to the city of the works of Jules Verne. The station was clad in copper sheets, and behind improvised portholes there were fragments of the National Conservatory’s exposition above Arts and Crafts. On the ceiling they arranged stylized wheels and gears, and the whole thing together became reminiscent of the attraction, the real womb of the Nautilus from the novel Twenty Thousand Leagues Under the Sea.

The station under Warsaw’s Woodrow Wilson Square was opened 10 years ago, in 2005, but since then it has not lost its external effect with the overall brevity of the metro in the Polish capital and is not for nothing respected by the locals as one of the most beautiful underground stations in the city.

This is high-tech in its purest form. The gray-steel color scheme, the glass pavilion above the lobby, the metal and granite elements, the abstract mosaics… And above all this is a large oval structure formed by concentrically diverging lines. In fact, it is a chandelier that both lights up the station and illuminates itself in different colors depending on the time of day.

It is said that the first line of the Pyongyang subway was built by the Chinese. The North Korean brothers in the revolutionary struggle did not pay for the work very actively, which caused another cat to run between the two countries. Nevertheless, in September 1973 the Juche subway was opened to the delight of locals and foreign tourists. Though it was the 1970s, the first stations were rather in the style prevailing in the Soviet camp in the 1930s and 1950s. Comrade Stalin would have been pleased.

Puheung (Revival) Station is one of the most solemn stations in the Pyongyang subway, so it was a must-see route for tourists. Lavishly decorated with monumental decorations (such as the mosaic depicting “Great Leader Comrade Kim Il Sung among workers” on the end wall and bas-reliefs on the track walls), it somewhat resembles Chelyuskintsev Park station in Minsk, except for the much more magnificent appearance of Asian lantern-like chandeliers.

Another example of a trendy modern approach to metro architecture. The station opened in 1997, and its designers from Zwarts & Jansma Architects were obviously inspired by the work of British superstar Zaha Hadid.

Curved “flowing” forms, light colors, perforation of the ceiling and walls with large round holes – it turns out that the image of a fantastic ship, plowing the expanse of the universe, can be created by such, relatively modest means.

In the 2000s, people in Minsk got tired of the monotonous design of the new stations in the native metro. “Grushevka and Kuntsevshchina, Kamennaya Gorka and Mogilevskaya, Malinovka and Uruchye differ only in the location of the columns on the platform, the color of the lining, and the name font on the track wall. Meanwhile, there are many examples in the world, when the unusual, spectacular look of the typical station is achieved by simple, affordable methods.

For example, the St. Gellert Ter (St. Gerard’s Square) station in Budapest has a standard pylon design, but a very memorable image. For this purpose, it was simply lined with multicolored small tiles, which together form a twisted contrasting spiral pattern. In addition to this, the concrete structures of the lobby floor were left untreated. The resulting dynamic grid of trusses only enhances the overall effect.

Another example of this approach was shown in Bavarian Munich. In 1998 they opened an initially unremarkable station there, but in 2001, by adding just one element, it was transformed dramatically.

Eleven large lights with red, yellow and blue lamps were installed here. The track walls of the station were also illuminated in blue and purple. As a result, the typical subway station was transformed into an excellent example of stylish modern architecture, setting a festive mood for all visitors. This is not insignificant, since the Westfriedhof is located near the West Cemetery, one of the largest cemeteries in the city.

Naples, to put it mildly, is not the richest and safest city in Italy. Trying to get rid of a largely imposed image, the municipality of Naples has developed a program Stazioni dell’arte (“Art Stations”). In accordance with this program, famous architects and artists were commissioned to design new and renovate old stations, the first of which appeared in 1993. The result was not long in coming.

For example, Toledo station, which opened in 2013, immediately won the prestigious LEAF architectural award as “Best Public Building of the Year,” and has repeatedly topped the list of the world’s most beautiful metro stations. Indeed, the effect achieved by the mosaics is mesmerizing, but most importantly, the Naples authorities do not stop there. The next Duomo station near the cathedral, which is already under construction, is being designed by the famous Maximiliano Fuksas.