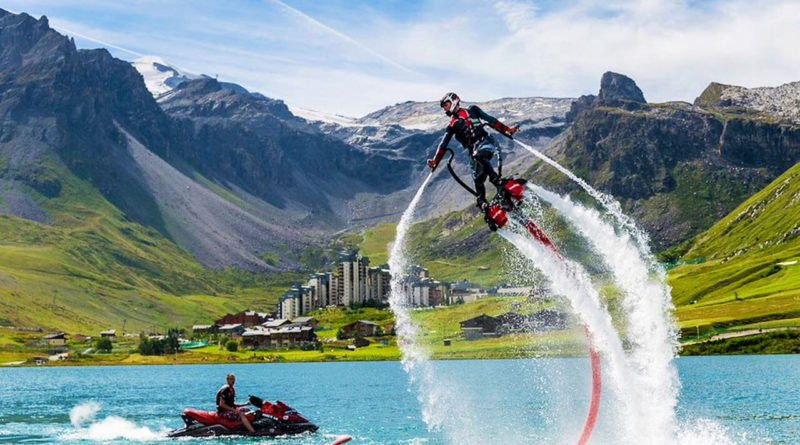 In everyday reality it is hard to keep track of everything that happens in world sports. We offer you a selection of new extraordinary sports. In this TOP there are sports that you have not even heard about, but meanwhile, they are recognized in many countries and even very successfully developed.

Polyathlon – a set of types of sports all-round events. There is a distinction between summer and winter. The list of summer polyathlon includes running for short and long distances, swimming in open-air and indoor pools, throwing a ball and a grenade, shooting with pneumatic and small-calibre weapons, power gymnastics. In the winter polyathlon the following kinds of sports competitions can be presented: ski races, shooting with pneumatic weapons, power exercises (pulling up on the bar or push-ups).

Study, this is not a sophisticated weapon. Where can it be used?

Polyathlon is officially recognized in Ukraine as a non-Olympic sport. This discipline is not currently represented at the Olympics and World Games. In our country, the Federation of Polyathlon of Ukraine is developing this kind of sport.

Aquathlon (underwater wrestling) – a discipline of underwater sports. Aquathlon is a competition of two athletes who are in the water, their goal – during the bout in the water and under water (breath hold) to take possession of the ribbon of the rival, fixed on his ankle.

Sports – a duel of two athletes in the water, with the purpose to get hold of a ribbon of the rival, attached to his ankle;

combat – includes knife techniques, suffocating and painful techniques. It is used in the training of rescuers and fighters of special purpose units;

Marine multiathlon consists of a complex of sports, different in character, load and way of performing exercises.

Firing a small-caliber rifle at a distance of 50 m,

in the cross-country athletics 1.5 km.

Two exercises are related to the performance in the water area:

All yachts are standard. Marine all-round events are not included in the list of disciplines presented at the Olympic or World Games. This non-Olympic sport is officially recognized in Ukraine. The Federation of Marine All-around and Aquathlon of Ukraine is engaged in development in our country.

Kurash wrestling is a traditional type of wrestling for Turks, Azerbaijanis, Uzbeks, Kazakhs, Uighurs, Turkmens, Tatars and Kirghiz. Competitions in Kurash were held during various holidays and weddings.

As an independent sports discipline, Kurash wrestling was formed not so long ago. In the early 1990s, Uzbekistan began an active revival of this struggle. At the end of the last century, the first planetary forum on Kurash was held. And in 2003, the General Assembly of the Olympic Council of Asia recognized Kurash wrestling as an official sport.

It is an Olympic discipline, which is officially recognized in Ukraine. Kurash is not represented in the World or Olympic Games program. In our state the All-Ukrainian Federation of Kurash wrestling is engaged in rather intensive development of this kind.

Horting is a national type of sport martial arts. It is not only martial art, but also a set of exercises that hardens the body, helps to self-improve, get closer to Ukrainian traditions and get spiritual and cultural education. The name “horting” originates from Khortytsya Island, where Zaporizhzhya Sich was located.

The kind of sport includes five disciplines in the program:

Demonstration speeches without weapons – demonstration of the amplitude of technical actions of self-defense;

Horting – is officially recognized in Ukraine as a non-Olympic sport. It is not represented in the Olympics or World Games program.

This exciting game originated in Germany, where there are irregular championships. Since its inception, two championships have been held in 2009 and 2015. The team consists of 7 players. During the game there are 6 players from each team on the rink – 5 field and 1 goalkeeper, plus one replacement player. The duration of the game is 6 minutes. Players play in bowling shoes. Size of the goal is 3 by 2 meters.

If a game ends in a tie, a penalty shootout is played which consists of three attempts for each team.

Yukigasen is a snowball game. At the end of the twentieth century, the Japanese decided to add a waitress known to all winter fun. Yukigasen can be translated from Japanese as “snow battle”. Despite the simple rules of the game, it is important to have good physical fitness and a strategic mindset.

The main goal of Yukigasen is to capture the opponent’s team flag by removing it from the stand and knocking out the opponent’s players with snowballs. Recently there has been talk of introducing the snowball game into the Winter Olympics program. Now this sport is not yet officially recognized in Ukraine. In Ukraine, this exotic sport has just begun to get acquainted.

The 360Ball sport was created in 1990 by Mark and John Collins in South Africa and recreated in 2010. 360ball is a new sport that uses the principles and properties of the circle to determine the game of ball.

Players use a racket to apply the ball to a centrally placed concave disc. The court has no separate sides and players rotate 360° around the disc. Either two players (singles) or two teams of two players (doubles) play in 360ball.

Sepak-takro, or foot volleyball, is a vibrant and spectacular sport that has conquered all of Southeast Asia. It differs from volleyball in that it uses a rattan ball and can only be touched with legs, head or chest. In countries where it is very popular, the shpak takro can be seen almost everywhere.

If there is no suitable netting area at hand, there is a simplified version of the game – the two teams try to keep the ball in the air as long as possible, passing it to each other. As in every sport, the players on the team must demonstrate high skill in handling the ball. With its roots this game reaches the middle of the last millennium, and the homeland of Sepak Takro called Thailand.

Nowadays, Sepak takro is a recognized sport in the world, but not in Ukraine.

Bossabol is a game from Belgium, which combines capoeira (Brazilian wrestling), beach volleyball, acrobatics, trampoline tricks, football, air gymnastics. It is a ball game for two teams of 3 to 5 people, but only in contrast to other spectacular sports the whole game takes place on inflatable mats, which are separated by a stretched net in the middle, something remotely similar to volleyball.

There is a feeling that there is no gravity on the court, the players are very technically performing various acrobatic actions, bringing the audience into a frenzied ecstasy of this spectacle. Variations in game moments a huge variety, you can just hit the ball with your hand, on the opponent’s field or produce a spectacular trick that has just ripened in your head. Creativity is one of the most important advantages of bossabol. The player is free to do anything on the court, the main thing is to get points to win, but there is no quiet game of bossabol, players are trying their best to show something new, every member of the team is individual and you do not know what to expect from him now.