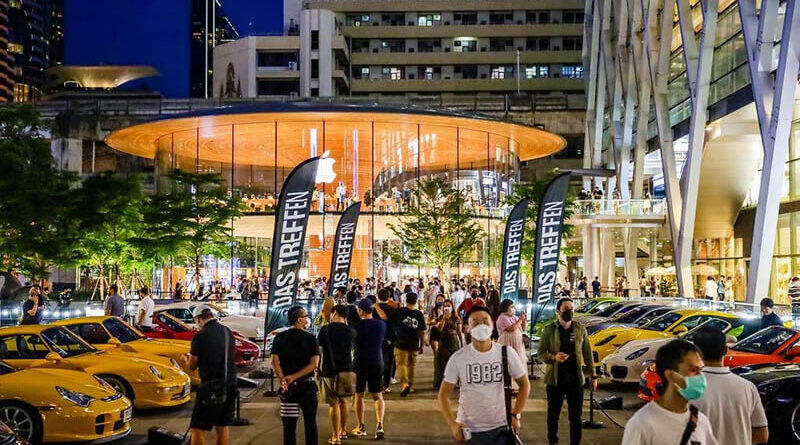 Hundreds of brand stores, exclusive pavilions with handmade goods, elite perfume and jewelry salons – what else can modern shopping centers surprise customers with? Maybe its size? We present the ten largest shopping malls in the world.

The largest shopping center in Thailand and one of the favorite shopping destinations in Southeast Asia. CentralWorld has more than 500 stores, 100 restaurants, 15 cinemas, a jewelry arcade and watch galleries, as well as Thailand’s largest food hypermarket. Everything from name-brand items to affordable gifts and home décor from all over Asia can be found here.

Among the ten largest shopping centers by area is Persian Gulf Complex, located in Shiraz, Iran. Its retail area is 450,000 m2, the opening of the shopping complex took place in 2012. Despite the fact that the shopping area of the center is relatively small, by the number of stores it is a true world leader – they are more than 2500. There are no huge multi-level pavilions in this center, instead visitors can look into miniature boutiques and stores, where you can find literally any product.

It is currently the 3rd largest mall in the Philippines and the 7th largest in the world. SM Seaside City Cebu is a large mall with a circular shape. It has several movie theaters, a two-story store, several entertainment centers, and a food court surrounded by an ice skating rink.

In operation since 1991, this mall is considered one of the largest in the Philippines. It is estimated that SM Megamall receives about 800,000 visitors per day. The mall consists of two main buildings, Building “A” and Building “B”. And the first building contains more entertainment and fast food outlets, while the second one houses the bulk of stores and high-end restaurants. The owners of SM Megamall have plans to expand it, which will make it the largest mall in the Philippines.

1 Utama is one of the most popular shopping malls in the Klang Valley. The largest shopping center in Malaysia, located about 30 minutes from the city center of Kuala Lumpur, has more than 1,000 stores and a huge variety of specialty restaurants and entertainment venues. This shopping center is known to locals by the name 1U and is divided into two wings: the Old Wing and the New Wing. The Old Wing has recently been completely renovated with a collection of new stores, a glossy and sleek facade, and there is even a third floor that is an entertainment area.

The largest shopping center in the country and in the region, it is known not only for the impressive number of stores, but also for the fact that it has about 400 restaurants, cafes, snack bars and eateries. Thanks to its truly “golden” standards of customer service, it has won various awards at prestigious international competitions several years in a row.

The third largest mall in the world and in China, this one in Beijing can remind you of the Soviet past and the “department store” arrangement of those days. The mall has 6 floors (+1 underground floor) and each floor is dedicated to a theme. The underground floor contains maternity and baby products, as well as an ice rink and other children’s playgrounds. The first floor is restaurants, clothing and jewelry stores. The second and third floors are men’s and women’s clothing, respectively. The fourth floor – children’s clothing and toys. The fifth floor contains the snack bars, restaurants, and eateries, but also a huge arcade, a movie theater, and bookstores. On the smallest floor, the sixth, is a large sports center.

The second largest shopping mall in China and in the world. Built in 2016 in Tianjin. The mall is managed by SM Prime Holdings, a Filipino chain that owns 71 malls in the Philippines and seven in China. The facility, which cost 3 billion yuan ($431 million) to build, is located in the Tianjin Free Trade Zone. Parking for the new mall has a capacity of 8,700 vehicles. The complex consists of three oval buildings connected by a ring. The design of the project is based on the Taoist concept of the five elements of Wu-Xing. The new mall has become a one-stop shopping destination for residents of the Beijing-Tianjin-Hebei region.

The largest shopping mall in the world and in China is not located in Beijing, Shanghai or any other famous city. It is located in the city of Dongguan. That’s the first amazing fact. The second surprising fact is that there are only 47 stores. This is not because they are so elite, but because no one wished to occupy the remaining 99% of the space – the owners of the center made a serious miscalculation about its location. Simply put – no one needed it and it was very difficult to find tenants for the remaining 2,303 retail spaces.