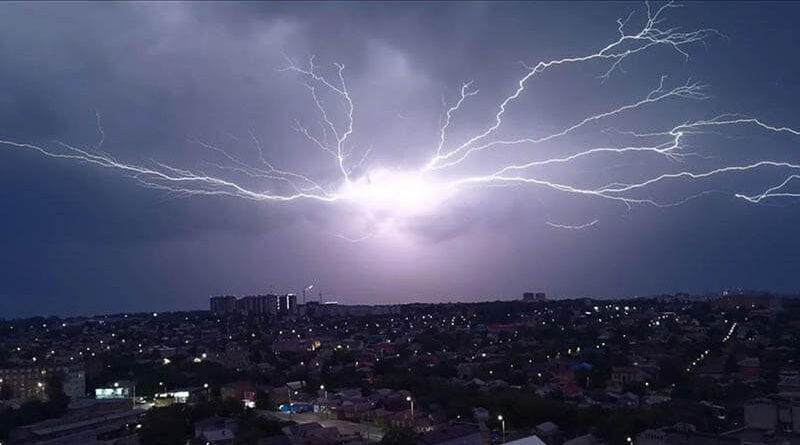 Lightning strikes are very rare and are therefore always considered very unusual. The average American has a one in five thousand chance of being struck by lightning. This is quite a comforting statistic, but not for those unfortunate people who do get struck by lightning. These people didn’t just win the worst lottery you can think of, but they also made our list precisely because the misfortune happened to them in a very unusual way.

From multiple lightning strikes to surviving with just your Walkman, you’ll find it hard to believe, but that’s just how it happened. So put on your rubber boots, make yourself comfortable, and listen up!

In 1980, a 62-year-old man from Falmouth, Maine, was struck by lightning. Our hero’s name was Edwin Robinson. Not only is lightning striking a man a rarity, but it also restored his eyesight. Robinson had a car accident nine years ago that left him blind, but the lightning stroke partially healed his eyes!

James Church, 55, was fishing in Ponce Inlet, Florida when he was suddenly struck by lightning. The man was thrown about 180 centimeters straight into the metal railing. The strangest thing about the incident was that it was barely drizzling when the lightning struck. Emergency surgery lasted nine hours and doctors were able to save Charch, but he did lose two fingers and had to have part of his small and large intestine removed. In addition, the man had both of his eardrums burst.

Natasha Timarovic was brushing her teeth when she was suddenly struck by lightning. The lightning shot went through her entire body and out through her anus, leaving her with very severe burns. Normally when lightning strikes, the current goes out through the victim’s feet, but our heroine was wearing rubber-soled shoes. That’s why this time the lightning chose a different path…

In 1986, Jennifer Mann was just 15 years old. She was sitting in her room, reading Stephen King’s book “The Shining”, when suddenly something terrible happened, and it was not in the narrative of the famous writer. Right through the wall into the girl’s room a lightning strike, Jennifer’s bed caught fire, but she herself was hardly hurt, except for the noise in her ears and a tingling sensation in the jaw. Perhaps since then Jennifer began to choose books to read much more carefully.

Most people think lightning only happens during severe thunderstorms. However, in 2011 in Pennsylvania, things went far from the usual scenario, and an 11-year-old girl was struck by lightning on a clear, sunny day. Apparently, the discharge was caused by a thunderstorm that was raging a few kilometers away from the poor girl. Such a phenomenon is extremely rare, and it is its unpredictability that poses the greatest danger.

During a severe thunderstorm, 24-year-old Winston Kemp ran out into the field to save his pumpkins, and as he ran back to his house, he saw bright lightning appear from somewhere behind his neighbor’s house. The sight stunned Kemp, but he didn’t even realize he had been struck by lightning. A little later, the boy felt intense pain, and he got nasty blisters on his hands. Winston felt so bad that he decided to take a sick day and didn’t go to work. It turned out that the unfortunate man had been struck by so-called ground lightning, which at the same time left a large fractal scar on his body.

Melvin Roberts, 62, states that he has experienced 11 lightning strikes in his lifetime. The discharge struck him in sunny weather and while he was driving a bulldozer, and lightning struck Roberts twice more while he was mowing the grass on his lawn. Few people believe these stories, though the man even has medical records of his injuries, including the typical burns that usually appear just after being struck by lightning.

There was also an unusual incident in West Germany. A couple was kissing in a car parked not far from the A44 freeway. In order to be completely alone, the heated people decided to hide in the woods. Ignoring the fact that a thunderstorm was approaching, they retreated behind the trees, to indulge in their passion as quickly as possible. Suddenly lightning struck right next to them. The frightened and naked lovers jumped out of the bushes, ran out to the road, and trembled there, covering themselves with bushes, until a local policeman discovered them.

There may be little truth in this story, but it is still very unusual. In 1932, Thomas Young, a farmer from Tennessee, was living out his last days. He was dying of cancer. Lightning struck the man as he rested peacefully in his hammock. The discharge passed through Young’s entire body and came out through the soles of his shoes. The lightning is said to have badly disfigured his face, but cured his fatal ailment.

The 1874 edition of the New York Times mentioned an unbelievable incident in Baltimore. During a thunderstorm, lightning struck the railroad tracks, taking the form of fireballs and moving along the rails.

Roy Sullivan has been struck by lightning so many times that he’s even been nicknamed “The Spark Ranger. He was once a ranger in Shenandoah National Park, but no one has ever personally witnessed Sullivan being struck by a single bolt of lightning. Surprisingly, that didn’t stop the forester from convincing the Guinness Book of World Records to give him the title of the man who survived the most lightning strikes. From 1948 to 1977, according to Roy, as many as seven lightning strikes hit him. Even more surprising is that the man died not from a lightning strike, but from a gunshot wound, and the shot was made by himself.

During a thunderstorm, Sophie Frost and her boyfriend tried to shelter from the rain under a tree. That’s where the girl was struck by lightning. Luckily, Sophie had her iPod with her. Doctors believe the wire on the device took almost all the 300,000 volts of electricity and protected the girl’s vital organs. Frost was left with burns almost all over her body from chest to feet, but otherwise she was almost unharmed. By happy coincidence, the girl received this player as a gift from her grandmother just four days before the accident.

Many people have a superstitious fear of the number 13, and in this case the fear was justified. In 2010 on the coast of the English town of Lowestoft there was another air show. The event took place on Friday the 13th and at precisely 13 hours and 13 minutes one of the spectators, a 13-year old boy, was struck by lightning. Fortunately, the teenager subsequently made a full recovery.

Of all the dangers that await divers during their dives, a lightning strike is one of the most unlikely problems. Unfortunately for the 36-year-old diver, that’s exactly what happened to him. The man was diving in the coastal waters of Deerfield Beach (Deerfield Beach, USA), and when he surfaced to return to the boat and go to shore, his oxygen cylinder was hit by a lightning strike. The diver’s comrades brought the victim to shore where he was given first aid, but he could not be saved.

In 1998, a terrible tragedy happened during a soccer match in Kinshasa, the capital of the Congo. A lightning strike killed an entire team right on the field. A total of 11 athletes died in this incident, and 30 people were injured in various ways. The local population attributed the incident to witchcraft.

You probably always thought the shower room was one of the safest places in the house during a thunderstorm. Unfortunately, in the case of 12-year-old Alice Svensson from Sweden, that wasn’t quite the case. A bolt of lightning struck her house and traveled through the pipes right into the bathroom, just as she was holding the metal shower hose. Alice’s arm hurt for a while afterwards, but she was very lucky that nothing worse happened to her.

Meteorologists know almost everything about lightning, and the last thing they’d want is to get too close to lightning. Brad Sussman had just walked up to a metal-framed window and touched it with his hand when he was suddenly thrown five and a half feet inside the house. As it turned out, lightning had punched a hole in the roof above his porch and passed through the window frame.

Ante Djindji, 29, from Croatia, also knows firsthand about lightning strikes. While riding his motorcycle, the man decided to take a short break to go to the bathroom. That’s when he got into a very unpleasant situation – lightning struck him right in the penis, and Ante was literally knocked out during the delicate process. Fortunately, the Croatian ended up with only burns on his chest and arms.

Synesthesia is a unique phenomenon in which some people associate certain colors with musical notes or see colorful glow around other people. Sometimes synesthetes associate the sound of words with certain tastes and sounds with touch. In our case, the 20-year-old girl was also a synesthete, but after being struck by lightning, her peculiarity took on a new and even more unusual form. For example, she began to see gold, silver, and other colors that other people did not see.

While flying over Moscow, a passenger plane was struck by a ball lightning, which burned through the hull of the aircraft and flew directly over the heads of the people on board. None of the passengers or crew were injured, although the plane’s equipment was badly damaged, forcing the pilots to turn the plane around and make an emergency landing.

Ric Flair is an established wrestling star, and he once told how he was struck by lightning. As he was getting off the plane, the athlete suddenly felt a strong pressure. As it turned out, his umbrella was struck by lightning, which also ripped it out of the traveler’s hands. Unfortunately, the discharge also hit a man standing just 1.5 meters behind Flair. The lightning struck him in his eye, killing him instantly. The wrestler admitted that at that moment he was petrified of the experience.

James Otis Jr. was famous for his active support of the American Revolution and the struggle for independence from Great Britain. As you may have guessed, he also had a strange lightning story in his life. In one of his letters to his sister, the patriot once wrote roughly the following: “My dear sister, I hope that when God Almighty in His righteous providence sends me out of this time into eternity, it will be through a stroke of lightning.” Incredibly, Otis Jr.’s wish came true – in 1783 a huge dark cloud appeared in the sky and the American activist was struck to death by lightning.

In 1908, during another Sunday service, Baptist minister T. H. Feigin came down the hall to greet his flock and shake hands with the congregation. That’s when a lightning strike struck the church building, killing the unfortunate dignitary on the spot.

1.A couple of teenagers escaped only because the boys were holding hands

A couple of teenagers were walking to get hamburgers. They were holding hands when suddenly they felt a hard blow from behind. Dylan woke up about a meter away from his friend Lexie. Apparently, the shock hit the guy in the head, went through the teenagers’ arms and eventually came out through the girl’s leg. According to the doctor, that’s what saved them both.