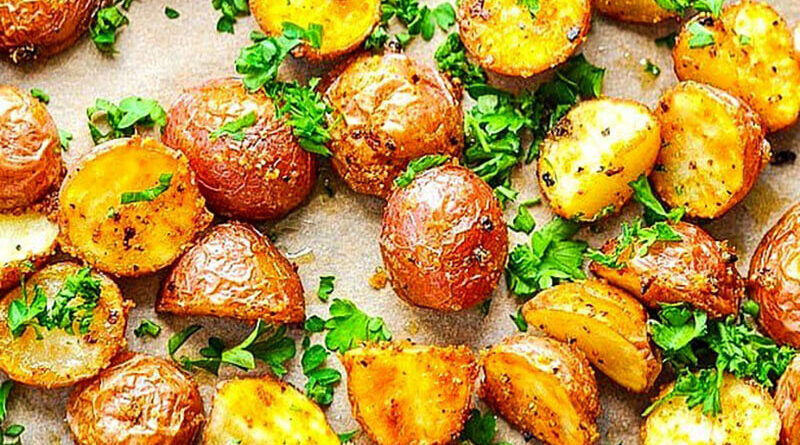 Potatoes are so versatile that their dishes are appreciated and loved all over the world. Different countries use the same recipes in their traditional kitchens, varying according to local customs. Some dishes (such as fried potatoes) are incredibly popular with all nations, while others (such as zeppelins) have a national flavour and amaze visitors with their unusuality.  Which potato dishes are the most popular among the supporters of the artegusto project and worthy of the title “Best potato dish”? We present our potato TOP-5!

Young potatoes are excellent for baking in the oven, both whole and half. They can be stuffed with a wide variety of fillings, using familiar classic recipes or creating your own unique dishes. This is how our signature potatoes with cheese croquettes, sweet paprika and cherry tomatoes came into being. The flavor of the finished dish was poured all over the kitchen, penetrating into the hearts of the hungry team, and the taste was amazing … It was him who we unanimously awarded first place!

Casserole casseroles based on stretched potatoes are good in that they easily “get along” with a variety of ingredients. Thus, traditional potato casserole will decorate any lunch if you add beef and mushrooms and grease the top with sour cream. Roasted onions and minced onions gave the dish a distinctive flavour, while grated green peas made it spicy. Sprinkled green casserole was so much to the taste of a friendly company of five people that it was unconditionally recognized as the winner dish and, accordingly, deserved the second place.

Inspired by the result, we decided to bake the potatoes in our uniform. To the small tubers we added bell pepper, shallot onions, Romantic tomatoes and Provencal herbs. Scented leaves of oregano and sage, mixed with the smell of heated olive oil, teased with their scent. The smoky cooked potatoes were beautiful and seemed a masterpiece of culinary art, reminiscent of the impeccable still lifes in the paintings by Flemish artists. The dish tasted perfect, so it deserved to be included in the TOP.

Special attention should be paid to the traditional Spanish tortilla, in which we introduced the author’s note: we immediately laid the stuffing of roasted with garlic potatoes, sliced half-ringed onions and raw eggs. The thin cake turned into a lush pie, very tender inside and with a fried crust on the outside. The characteristic flavor and aroma of the tortilla was given to the olive oil, which became the final chord for awarding the national dish of sunny Spain with a prize place at the table of one Moscow bakery.

The endless variety of potato soup variants leads to the conclusion that potatoes can “befriend” any product. That’s what we’ve come to prove by making a very delicate mashed potato soup. The delicacy of grated potatoes and jamon in a blender, pre-fried in olive oil, could be felt in every spoon. Roasted croutons and the aroma of shredded greens only emphasized the delicacy of the dish, and then we decided to pamper ourselves with this magical mash soup more often. And, of course, we put it in our top five potato dishes.