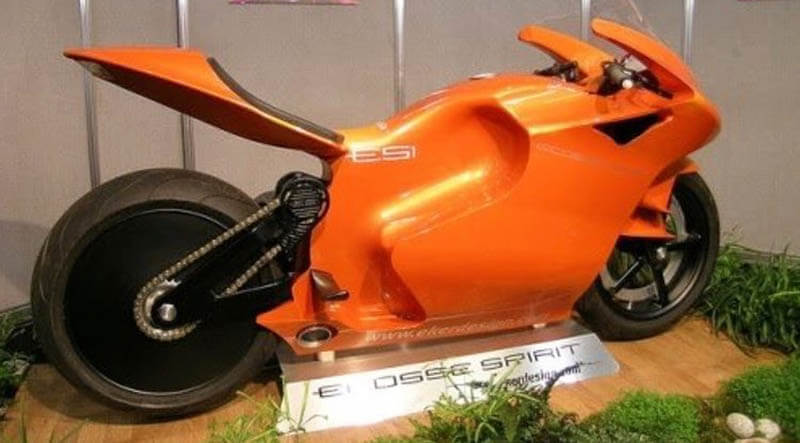 A luxury item can be made not only from a watch, a yacht, a car, but also from a motorcycle. For many years, manufacturers, designers and tuning ateliers do not cease to amaze others with interesting solutions and developments of motorcycles.

In today’s article we will talk about the most expensive motorcycles in the world, their prices and characteristics.

The company “Ecosse Moto Works INK” together with Formula 1 created the model Ecosse Spirit ES 1, which is currently considered the most expensive in the world. The bike is “loaded” to the maximum. Due to ergonomics and advanced technology, it has minimal air resistance. The main electronic unit is responsible for the functioning of other systems.

The model weighs 120 kg. It is equipped with a V-shaped engine rated at 200 horses. The torque is 190 Nm. Due to the power of the bike is quite capable of speeding up to 400 kilometers per hour. One of the chips of the body is that the legs of the biker when riding is not visible.

The price of the bike is impressive, as well as its filling – $3 600 000. However, after the presentation of a limited edition of 10 bikes, customers were immediately found. All ten Ecosse Spirit ES1 bikes were bought.

Harley-Davidson was made by the famous master-artist D. Armstrong, who successfully creates works in the style of space existentialism. The painting of the bike was made by hand, which increased the cost of the model.

The price was also affected by the artist’s statement that this is his only painted motorcycle and he will not make analogues. At the moment, the bike costs 3 million dollars.

Speed motorcycle is called “Porcupine”, so on parts for cooling it has spikes. The model was made by craftsmen from Britain.

This is the model on which the famous racer Leslie Graham won the World Championships in 1949. The model was not produced in mass, as it was intended for racing competitions.

The Dodge Tomahawk V 10 Superbike was presented to the world public in the beginning of zero. It was remembered primarily for its unusual design.

The rear and front tires of the bike are twin with a short distance. In this case, each wheel has its own independent suspension. The power of the bike is 500 horsepower. The engine volume is 8.3 liters. In a couple of seconds it is able to accelerate to 96 kilometers.

Yamaha Roadstar BMS model was remembered by the public as “Golden Chopper” due to the presence of real gold in the body. This is a collector’s model that does not provide for mass production.

Another highlight of the bike is the fixing of the front wheel only on one side. The “fork” can be tilted by means of pneumatic shock absorbers. In addition, the bike is equipped with an automatic clutch, which works during gear change.

The gas tank includes 2 compartments – one for fuel, and the other for electronic mechanisms. The battery is hidden in the body part.

The British Vintage Black model is valued, first of all, not for its characteristics, but for its antiquity and rich history. This is a classic almost in primordial form. It will be appreciated both by collectors and owners of tuning workshops.

The titanium stylish bike was made recently, but has already gained popularity. Its body part is made of high quality titanium. The power of the motorcycle is 225 horsepower, and the engine volume is 2.4 liters.

Only 13 Ecosse FE Ti – XX – Titanium Series were presented to the public.

It is possible to buy the model for 300 thousand dollars.

In 2007 the Italian company “Nera Concept Bike” created Ducati Testa Stretta NCR supermotorcycle. It is expected that in the near future the models will be serially produced. The bike successfully combines fashion trends and notes of futurism. The body part is made of titanium and carbon, due to which it is characterized by increased durability.

You can buy such a motorcycle, if you have on the account of 225 thousand dollars.

The attractive and stylish design of MTT Turbine Streetfighter attracts at a glance, and the benefits of the bike do not end there. Its engine has a capacity of 420 horses. The bike also includes a Rolls Royce-Allison engine, a two-speed gearbox, and a rear view camera, which transmits the image to a small color display. The motorcycle weighs 227 kg.

Icon Sheene motorcycle was designed by a talented designer E. Morris in honor of racer B. Sheen. The engine capacity is 250 horsepower, and volume – 1, 4 liters. According to the technical characteristics, the bike can reach speeds of 320 km/h.

Harley-Davidson, produced by “Howards Killer Customs”, became a repeated winner in many motorcycle competitions. He was also loved by many fans of two-wheeled bikes. It not only has a remarkable design, but also allows the motorcyclist to ride with the breeze – up to 160 kilometers per hour. It took 4,000 hours to create the bike.

The vintage model called Hildebrand & Wolfmuller is a spectacular combination of bike and bike. It was made in 1895, and the last time it was used in the 30s of the 20th century. Complementing the package is a four-stroke engine with air-cooled. The model has a maximum speed of 48 km/h, and power – 2.5 l/s.

At the moment Hildebrand & Wolfmuller are either in museums or by private collectors.

Harley-Davidson Rocker was manufactured by the company of the same name together with a tuning firm from Germany. The model was made for sale together with a 45-meter yacht. The design of the bike is perfectly combined with the vessel. Special side handles are provided for easy moving of the bike on the floating device.

Superbike is rightly considered one of the veterans among motorcycles, as it was made in the 20s of the 20th century. Its power is 8 hp, but as for its era, it was very much like nothing. Especially considering the speed limit of 130 km/h.

It is possible to buy such bike for 120 thousand dollars.

It is a successful joint project of “Neiman Marcus” and “Confederate Motors” companies. There are only 45 such models in the world now. They are characterized by a spectacular design, an engine with two cylinders and a five-speed gearbox. The chassis is made of stainless steel, and the body component is made of aluminum alloy.

In today’s article we have listed the most expensive types of motorcycles. Some of them are ready for racing, and some are a great addition to the private collection. For many years, bikes remain a favorite mode of transport for many celebrities and ordinary people.