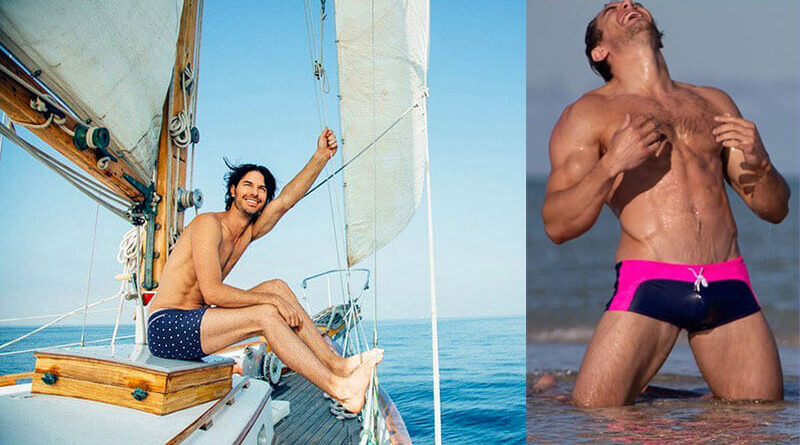 Families and boxers are the most popular types of men’s pants among our compatriots. Often their knowledge about the styles of men’s underwear ends here. And in vain: sometimes the usual cowards cause inconvenience to owners – and underwear of another cut could solve the problem.

You would not believe it: if you wanted to try all kinds of men’s underwear on yourself and put on daily underwear of a new style, this “testing” would take you several months!

To save you time, let’s just say in a nutshell…

about the pros and cons of the basic types of men’s underwear.

and we’ll tell you when and with what to wear them.

Slips are a type of underwear that we know from childhood; they are the same ordinary underwear that you wore as a child. Slips completely cover the buttocks at the back and genitals at the front, while the legs remain open due to the high neckline on the sides. Nowadays it’s fashionable to call them “briefs” or “slips”.

But these “classic underwear” are not as simple as they seem: there are underwear slips with a low, normal and high fit at the waist, different materials and design, even there are men’s underwear slips for those who want to increase volume.

Those who don’t like the extra fabric on their underwear that gets knocked down;

those who need to have their genitals fixed (for example, in sports);

those who want to visually increase their economy ;).

In which situations it is better to wear slips / vultures:

At the gym, during running, during active games, sports (at amateur level).

Daily under normal clothes (up to narrow trousers).

Under festive clothes (so that the trousers do not clutter with extra fabric).

With what to wear slips / vrives:

Classic cut pants are comfortable to wear under any clothes (including narrow trousers) due to the high neckline around the legs.

Boxers – spacious, “ventilated” free cut panties, similar to the shorts of boxers speaking in the ring. Often in front of the pants boxers have a codpiece (slot on the buttons or without them).

There are two main types of men’s boxer shorts: free (they are “family shorts”) and tight.

Who will fit boxing pants:

those who like the free airing of the groin;

those who wear baggy pants;

With what to wear boxers:

In families, the legs move freely, nothing limits them. What distinguishes them by their appearance is a baggy cut. Family pants are worn:

Under the baggy trousers.

Under the pajamas or instead of them.

Extremely not recommended to put on family shorts during sports activities.

Fitting boxer shorts fit tighter on the hips, but do not prevent the legs from moving freely. Thanks to the narrower cut, the tighter fit boxers can be worn underneath:

Boxing briefs are something in between tight-fitting boxers and panties (briefs / slips): in terms of length in the classic version they correspond to boxing briefs, and in terms of support and fixation they are comparable to briefs.

Who’s gonna be good for a vulture boxer:

Those who like lingerie that’s a little supportive, but not genital-clamping;

those who want to prevent chafing in amateur sports, at the gym, or when wearing tight jeans;

those who like classic free cut boxer briefs, but would like to try underwear with light support for the genitals;

both tall and short.

In which situations to wear boxers-riffles:

Boxer’s breeches are comfortable to work out in the gym (if you’re not a professional athlete and don’t experience too much stress).

What to wear boxing breeches with:

Men’s cowards hippies are something between slips/briefs and boxing briefs (sometimes hippies are called a kind of briefs boxer).

How to distinguish this kind of men’s underwear from the rest?

The step stitch is shorter for hippies than for briefs boxers.

When you look at the front and back the hippies look like a rectangle (with short vertical sides).

The hippies look stylish – they give the lower part of the torso a “streamlined” look.

Who will fit the hippies:

both short and tall men;

men of athletic and skinny physique;

amateurs of fixing and supporting underwear, while wishing to wear more closed underwear (compared to slips, for example);

those who want to raise their “dignity” visually.

In what situations do you wear hippies:

Bikini – two triangles of fabric in front and back, connected either by narrow strips of fabric or by laces on the sides. The bikinis have a low landing at the waist.

In what situations do men’s bikinis wear:

For bodybuilders, a bikini is a uniform because it hides a minimum body and looks decent on stage, unlike some other types of men’s underwear (see below);

in some countries bikini – a common type of beachwear and among men; it is not surprising, because in a bikini is comfortable to sunbathe;

under the skinny pants;

under normal and sports shorts;

Thong pants for men is a triangle of fabric in front, connected by a narrow fabric strip (or rope), passing between the buttocks, with a belt at the back (the variant in the photo above sometimes refers to a mini-bikini, but the manufacturer calls these pants string). Not every man will dare to wear such underwear. Doing sports in the thong is contraindicated.

Who would fit a man’s thong underwear:

for super tight jeans who don’t want their underwear to be visible;

who want to surprise their lover;

With what to wear men’s underwear thong:

The shell pants are designed specifically for traumatic games and extreme sports. They lift up the farm from the front, securely fixing it and taking away moisture. At the bottom there are two rubber bands attached to the codpiece, which are attached to the side of the belt. The buttocks remain open. The front part of these pants is often fitted with a rigid shell to protect it from impact.

Who will fit the underwear with the sink:

fans of very tight pants as an alternative to thong and bikini.

men’s underwear with fur effect in front or back;

corrective underwear (with a tightening belt or bandage);

underwear that follows the anatomy of the body;