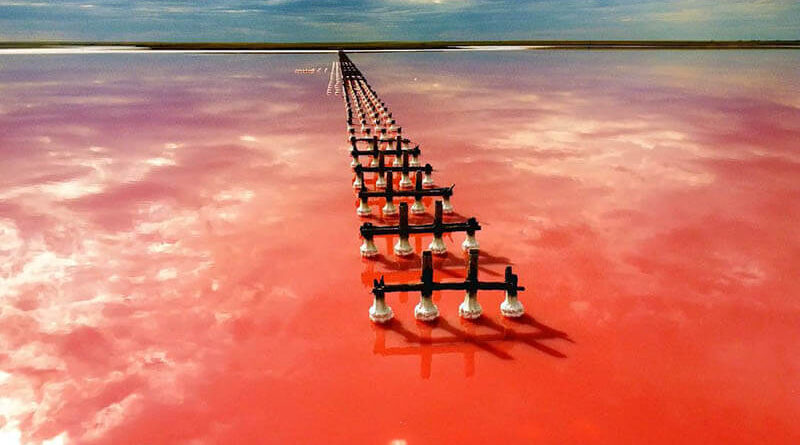 Scientists estimate that there are about 117 million lakes on Earth. All of them are different in origin, shape, size, water composition, and depth. Let’s talk about some unusual lakes, namely those that have a unique composition of water, which gives them different properties: salinity, color, mineral content, etc.

Lake Wanda, the world’s saltiest lake, was discovered in Antarctica. The lake is 10 times more salty than seawater, it is saltier than the Dead Sea. Lake Wanda is permanently covered by a 4-meter layer of clear ice, but the lower layers of water have a temperature of +23 degrees.

The Dead Sea is located in the deepest depression on land and lies 430 meters below sea level, the water level decreases by 1 m per year. The salinity of the lake is 300-350 g/l. The mineralogical composition of the Dead Sea salt is unique, which has enabled the development of a therapeutic resort, which attracts many tourists.

Lake Assal is of volcanic origin in the crater of an extinct volcano in Djibouti. It is 155 meters below sea level (the lowest point in Africa) and has a salinity of 350-400 g/l. The lake is surrounded by valleys of saline soil and extinct volcanoes, with salt crystals forming bizarre landscapes on its shores.

Lake Elton is the saltiest lake in Russia, located in Astrakhan Oblast. It is the largest mineral lake in Europe with an area of 152 sq. km. It is saturated with salt solution (brine), the sources of which are at the bottom of the lake. The salt content here is 200-500 g/l, which is one and a half times more than at the Dead Sea. The bottom of the lake also contains algae, which gives the water a reddish hue. The ancient name of the lake comes from the Turkic “Altyn-Nur,” which means “Golden Lake.” The lake acquires its golden or red color when the sun’s rays fall at a certain angle, usually in the afternoon.

Death Lake is one of the most dangerous lakes, bathing in which is deadly to humans, located in Sicily. The lake is devoid of all life, even the shores are devoid of vegetation. Scientists who investigated the lake found two springs at the bottom, releasing sulfuric acid into the water, which is what makes the lake dangerous to all life.

Lake Maly Semyachik in Kamchatka is located in the crater of a volcano. Due to volcanic activity, there is a high concentration of acid and sulfur. The combination of hydrogen and acid, reflecting the sun’s rays, gives the lake an unusual color – from above the lake looks bright green. Almost always the water temperature was 30-40 degrees, but after 1992 the lake began to freeze in winter.

Kawa Ijen Lake is located on the island of Java. It is the largest hot lake of sulfuric acid. There are sulfur mines along its shores. A fog hangs over the lake from the fumes of sulfur from the volcano crater. The fumes are very poisonous and deadly to all living creatures around it.

Ink Lake is located in Algeria, it is indeed filled with ink. This compound was formed thanks to the two rivers flowing into this lake. The water of one of them contains a solution of iron salts, the other contains organic compounds of peat bogs. Mixing in the lake basin, the water of these rivers turns into ink. The lake is destructive to all life, but its ink is used in ballpoint pens, which are sold to tourists.

Asphalt Lake Peach Lake is located on the island of Trinidad. It was formed naturally: deep-seated oil passes through the mouth of a volcano, and volatile substances evaporate from it under the influence of high temperature. That is how oil turns into asphalt. It is not only used for its own construction needs, but is also exported to other countries.

Lakes come in a variety of hues: red, pink, crimson, green, blue, and white. The reasons for this coloring are also varied: it can be algae, microorganisms or minerals dissolved in the water. There are many such colored lakes on the planet, let’s tell you about the closest to us.

Crimson lakes in Astrakhan region are colored pale pink due to the presence of armetic crustaceans in the water. In addition, these crustaceans give the water a raspberry aroma when decomposed. The salt extracted from these lakes is white in color and smells like raspberries.

The pink lake Masazir is located in Azerbaijan, 16 km from Baku. Salt is extracted from the lake, so it is almost completely fenced in. The pink color of the water is given by algae, and the intensity changes depending on the light. The most intense color can be seen in sunny weather.

Koyashskoe is another pink lake, located in Crimea. It was once part of the Black Sea, but is now separated from it by a 100-meter strip of land. The water is salty and the shores are covered with salt crystals that have a violet aroma thanks to algae.

Black Lake Kakhinaidaakh in Yakutia is a solution of soot, ash and soot. It was formed in a depression of a hard coal deposit. This field burned for a long time and then was flooded with water.

The yellow lake Sarykul in Chelyabinsk Oblast took on color because of particles of clay dissolved in the water.

The white lake on Kunashir Island is milky white and filled with a solution of sulfuric and hydrochloric acids. Volcanic gases heat the water to boiling.