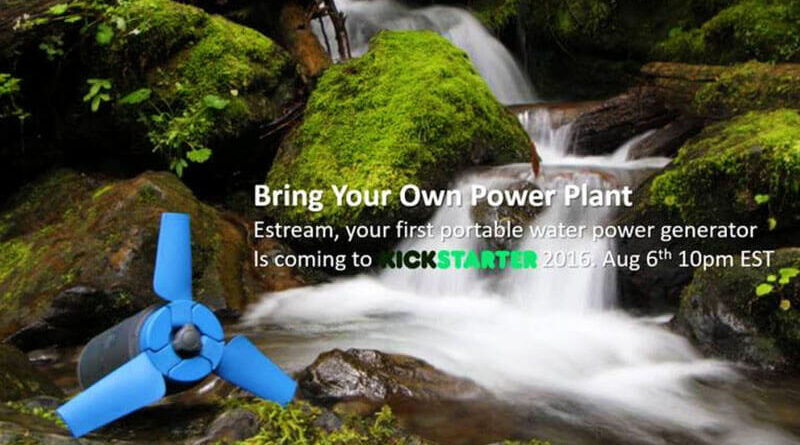 The turbine was developed by engineers from the startup company Enomad. Estream is a portable generator that is charged from running water – a river or stream. It is compact and weighs less than a kilogram. Current energy can charge the device at any time of the day or night and in any weather. Running water provides round-the-clock uninterrupted power supply (unlike air streams, solar panels or portable windmills). Therefore, the developers have chosen running water as a source of energy.

Construction of Estream hand turbineEstream consists of two parts: at the top is a generator, which is connected to the turbine gear. At the bottom is a lithium-ion battery at 6400 mA / h.Even a weak current is enough to rotate the mini-turbine of a mobile generator. Estream can also be used when traveling on any boat. The device is capable of producing from 2.5 to 5 watts of energy.The battery can charge any electronic device via the USB connector. At the bottom of the Estream is a built-in flashlight that works even underwater.

The total weight of the mini-turbine is 800 g, and it takes about 4.5 hours to fully charge the battery.According to the authors of the project, one Estream charge is enough to charge 3 smartphones or even a tablet PC. But it all depends on the capacity of their battery: Estream will be enough for 4 full charges iPhone 5s or one full charge Philips Xenium V387.

The miniature Estream water turbine is suitable for use in travel and in places where there are no central power grids.The set includes the protection of the blades, a cord with a carabiner to keep the turbine in the stream and a pair of USB-cables to charge the device. To purchase Estream, you must contribute a project of $ 180.