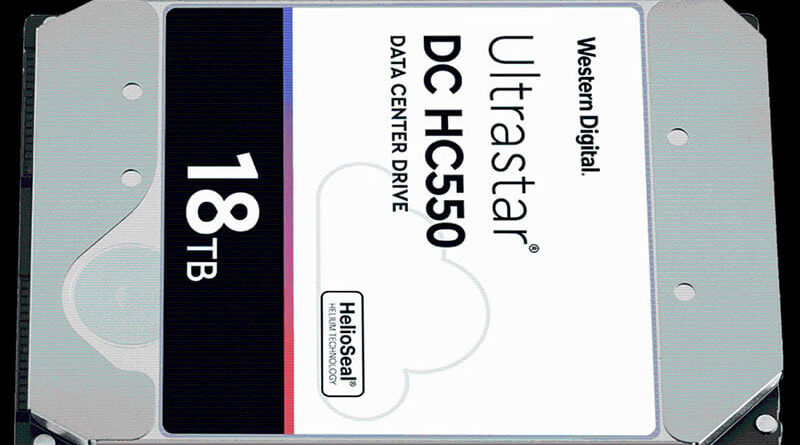 “We received 16 and 18 terabytes of revenue in the first quarter of the fiscal year,” said David Goeckeler, chief executive officer of Western Digital, during a teleconference with analysts and investors. – Customer interest in these products, particularly our 18-Tbyte Winchester, is very high and production growth is on track.

The Western Digital Ultrastar DC HC550 3.5-inch hard drive family consists of two 16 and 18 Terabyte models and is based on the sixth generation HelioSeal platform. The main differences between the new platform and the previous ones are the use of nine wafers (for both 18 and 16 terabyte models), a new mechanical architecture, and perpendicular energy assisted magnetic recording technology, ePMR. This technology – of which Western Digital prefers to remain silent – uses an energy source to temporarily (at the time of recording) reduce the coercive force of the magnetic layer. However, this source is not a laser (NFT – Near-Field Optical Transducer) or microwave (STO – Spin Torque Oscillator) used in the case of HAMR and MAMR technologies.

The other features of the Western Digital Ultrastar DC HC550 are typical of cloud data center hard drives: 7,200 rpm, a large cache buffer, Serial ATA 6Gb/s or SAS interfaces, 550 Tbytes average annual workload, 2.5 million hours of failover time and a standard five-year warranty. As the new hard drives will have to work in racks with hundreds of vibrating hard drives, we can assume that they are equipped with well-known technology solutions to improve their reliability and durability in such environments. For example, the drive motor is attached to both the lower and upper plane of the HDD. In addition, the hard drives are equipped with vibration and environmental sensors.

Western Digital does not declare the performance level of the Ultrastar DC HC550 hard drives, but given the higher write densities compared to its predecessors, it is logical to expect newer drives to have higher read speeds. At the same time, taking into account the increased HDD capacity, the performance of Ultrastar DC HC550 in the area of random read/write operations per terabyte (IOPS/TB) is lower than that of the previous generation devices. As a result, a number of Western Digital customers will have to reconfigure their software (and add caching SSDs at the same time) to maintain service quality (QoS) and other parameters when using 18TB drives.

However, the benefits of 16- and 18-byte hard drives over previous generation hard drives are so significant that they will justify additional software configuration for a large number of cloud data center operators. For example, the use of 18TB hard drives allows you to store 4320 TB of data in a standard rack (240 HDD), which is 28% more than using 14TB drives, but with a similar level of power consumption. The ability to increase server rack capacity by nearly a third without increasing power consumption is a huge advantage for data center operators looking to maximize their storage capacity per square meter and per watt.

Since Western Digital Ultrastar DC HC550 hard drives are currently delivered to selected customers, their cost is not voiced. However, given the relatively limited supply of unique data storage devices, one would assume that the company is getting a premium for them.